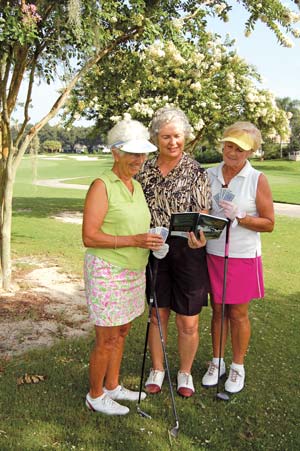 Poker golf is best played with a group of four or less.
Bridget (center) shows the rules for the book version to
Ann Bay (left) and Cathy Siegel (right),
her regular golfing buddies for more than four years.

Life is never boring for retired teacher Bridget Logan. And neither is her golf game.

Although she’s an avid stroke-play golfer, she and her golfing friends often challenge each other to a side bet or a ‘game within the game’ to keep things interesting.

“I have always enjoyed alternative formats,” she says. “I just couldn’t remember all the rules, and members of my foursome often remembered the same games but in different ways.”

For 30 years she took notes on scrap pieces of paper or index cards about the various games, often known by catchy names like Jackpot Golf, Ladder, Three-Ball, and By-the-Book. She began organizing them in a database, mainly for herself and her friends. Recently, Bridget combined her love of golf with her passion for writing into a useful little reference manual called The Golfer’s Game Book: A Manual of Golf Games and Side Bets. Her idea took off like one of Tiger’s tee shots.

“I wanted a handy reference book of the games to keep in my golf bag,” she says. “The people who saw it wanted one, too.”

The spiral-bound book contains more than 240 variations of golf games, side bets, and practice exercises. After she moved to The Villages, Bridget spent nearly a year writing it, but that was the easy part.

“The hardest part was knowing when to stop writing,” she explains. “I could have kept adding more games, but then it would not have fit in my golf bag.”

Bridget traveled to the 2008 Professional Golf Association’s Show in Orlando with a few copies of the book that she had printed through her own company, Reston Ventures Incorporated. After the PGA show, things moved quickly. The book received glowing reviews in Golf Fitness Magazine and by Golfweek’s James Achenbach, who called Bridget in advance to make sure she would be ready for the onslaught of orders that would be headed her way.

Since the book’s debut at the PGA Show, it has been sold in more than 30 states—and that’s without an advertising campaign. Only 500 copies were printed initially, but plans are underway for a second printing. The book is available in several local golf shops for $18.95, but most sales have been through her online company. Branded versions, where companies include their logos on the cover, have also been popular, including one for Golfweek.

“I knew what the PGA show could do for me and it did,” she says. “The book has gotten bigger than I expected, though.”

Bridget loves taking on new challenges. She wasn’t a golfer in her early years as a high school chemistry teacher in Birmingham, Ala., but was extremely self-motivated. She taught herself computer programming in her free time and later created a state-of-the-art computer classroom.

During lunch one day, the Mountain Brook High School coaches where she taught mentioned that they needed an accurate way to rate their players. Bridget wrote a speed/strength analysis program for them, eventually leading to a company on the side where she coded prep stats for every high school in the region.

“I told the coaches that I had always wanted to play golf,” she remembers with a laugh. “They took me on, not only to thank me but also as a mission.”

Bridget devoted herself to learning as much she could and practicing as often as possible. Four years ago, she and her mother visited golfing friends in The Villages never really expecting to move to Florida from their native Alabama. Her mother, June, wasn’t that active in Birmingham but fell in love with the retirement community. They moved to the Village of Belle Aire together, and while June learned to play golf at age 79, Bridget perfected her game. She won the highly competitive Glenview Country Club Women’s Championship this past March.

Bridget used to golf four to five times a week, but her first book has changed that. Now she’s lucky to play a couple of times a week. That suits her just fine, though, as she writes a second game book—this one for children.

Golf for Kids and Grandkids, due out in the fall, will put the joy back in the game for children who are often pushed into golf and end up hating it.

“A lot of parents want their children to become the next Tiger,” she says. “The new book helps them to remember to have a little fun.”

Tony Simpson, director of The Villages Tri-County Junior Golf Program, agrees that games can make learning golf even more fun because they help players relax. He thinks that many of the games in Bridget’s current book also can be structured for young players.

“I totally recommend Bridget’s books,” he says. “She showed me the first one at the PGA Show this year and it is fantastic. She’s a class act as well as a great competitor.”

Golf is great hobby, but Bridget is anxious for new challenges. She is starting a live, online tutoring site that will help students one-on-one or in small group settings. Her love of teaching and working with students is leading her out of retirement and back into the world of conferences and meetings.

“It just goes to show you,” she says with a smile, “that the future is never what you plan.” 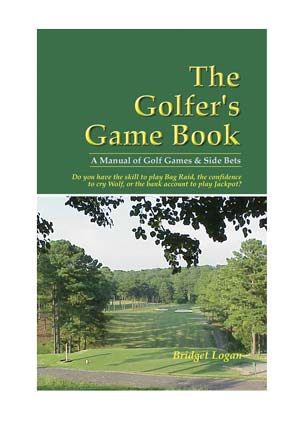 Bridget Logan says the games in her book are not only fun, but also an excellent way to improve your swing and regular golf game. Her book describes “Bingo, Bango, Bongo” as a great game for players who have a wide variety of handicaps. In this point game, three points (bingo, bango, bongo) are available on each hole, and the game rewards the player who is first at something. Players decide on the value of each point.

BINGO: First player on the green.

BANGO: Player closet to the hole (once all balls arrive on the green).

Player who wins all three points on a hole wins double! Add up points at end of game and pay up the difference to each player. Players must adhere to strict order of play because the player hitting first will have first chance to win a point. And no tapping in those close putts before someone else has a chance.