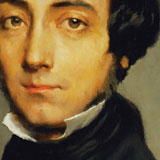 For many in the Marion County area, the biggest reward in giving back to the community is what they receive in return. Ocala Style recently sat down with four couples who are members of the Tocqueville Society, a national philanthropic group named after 19th-century French historian Alexis de Tocqueville (pictured left) who wrote about Americans’ giving nature. Their stories should serve as examples of what we all can do, even in tough economic times, to lift up our neighbors.

According to Charity Navigator, which tracks charities’ financial health, charitable giving accounts for two percent of the United States’ gross domestic product, the most of any country in the world. A recent USA Today/Gallup Poll reported that eight in 10 Americans donated money or volunteered time to a charity in the past year.

And GuideStar, a Washington-based clearinghouse for the country’s more than 1.7 million non-profits, estimates that Americans will donate more than $300 billion to charities this year.

Closer to home, United Way of Marion County raises millions in funds during its annual campaign, millions that go back into the community. The 2007 campaign, co-chaired by Chris Yancey and Harvey Vandeven, made available $1.5 million to 45 local programs managed by 31 local agencies. Additionally, more than $300,000 was distributed through the United Way’s Contributor Choice and Women of Worth programs.

“Marion County residents are fortunate in the gifts of time, talent, and resources that we receive every day to help improve lives,” says UWMC President Maureen Quinlan. “These gifts are generously given from many in the community, many who wish to remain nameless, wanting only to make a difference in someone’s quality of life.”

At the forefront of United Way’s fundraising efforts are the organization’s Leadership Givers, community and business leaders who are particularly generous with their time and donations. The different levels of Leadership Giving according to annual charitable contributions include the Tocqueville Society, Eclipse Club, Caring Society, and Young Leaders Society.

“The Tocqueville Society gives donors an opportunity to support some of the most critical needs of Marion County,” says Quinlan. “The generosity and commitment of our Tocqueville members is both admirable and so important to our community.”

Ocala Style recently visited with several prominent community leaders who are Tocqueville Society members. Here are their thoughts on charitable giving and its rewards, both for the community and personally. 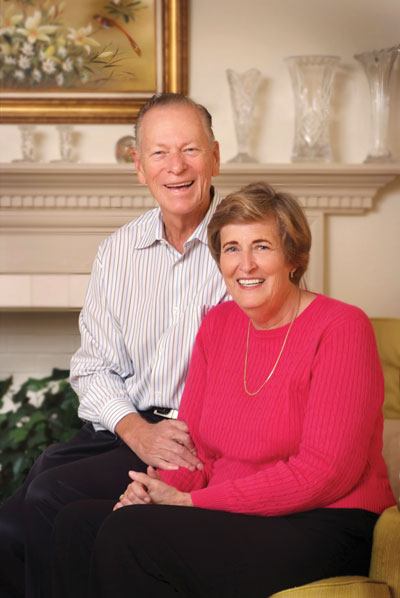 ‘Ocala’s Been Good To Us’

The Ewers name is a familiar one in the Marion County community for many reasons—for nearly two decades, Ron Ewers served in several executive positions with fire truck manufacturer Emergency One; the Ewers Century Center is the signature building for Central Florida Community College; and the well-known couple’s son, Randy, is the mayor of Ocala.

But it is for their giving spirit that Ron and Phyllis Ewers are best known. In 2007, the power couple was honored nationally as one of the top 10 “Benefactors of the Year” to the nation’s community colleges. They also received the 2006 Alex M. Collins Sr. Alexis de Tocqueville Society Award for their outstanding leadership and commitment to the community.

The couple has been leadership givers in United Way’s Eclipse Club for 20 years and Tocqueville Society members for the past six. Phyllis joined the United Way Board of Directors in 2001, served on the Agency Review Committee, and is a founding member of the United Way’s Women of Worth. In 2006, Ron and Phyllis were the United Way’s annual campaign’s co-chairs. The dynamic duo raised more than $2.5 million, a record for United Way of Marion County.

“Ocala’s been good to us,” says Ron, who has served as president of the Economic Development Council and the Boys & Girls Club. “It’s only right that we give back to the community.”

Phyllis agrees, saying, “We’ve been very fortunate, and our community is very important to us. In giving, we receive so much more in return.”

While serving on the Agency Review Committee, Phyllis got an up-close-and-personal look on the impact contributor dollars make through United Way.

“The great thing about United Way is that it carefully screens all the organizations applying for the funds,” says Phyllis. “Getting the funds to the most in need is very important. It makes a very real difference in so many lives.” 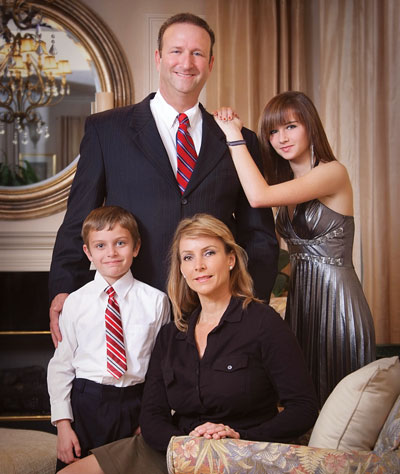 For Scott and Linda Siemens, giving back is more than just a philosophy. It’s a way of life, both personally and professionally.

“It’s always been our family and business philosophy to enhance and give back to the communities in which we make a living,” says Scott, who is the executive vice president of the Siemens Group, a major national community and real estate developer. “Both professionally and personally, we feel like it’s our duty to help make a community a better place to live for everyone.”

“Our family has grown to love the beauty and warmth of the Ocala area,” says Linda. “It has inspired within us a commitment to address the well-being of those in need in the community. We are honored to be able to help through United Way.”

And joining United Way was an easy decision for the Siemens.

“You can rely on the organization’s board to place the money with those most in need,” says Scott. “That is very reassuring to us.”

“I love United Way’s wide-reaching programs,” Linda adds. “It’s an umbrella over the community and it covers so many areas of need, more so than any other organization.”

The Siemens’ giving nature has already been passed down to another generation. Their daughter, Sarah, 14, founded Koats for Kids, which collects new coats for donation to children in the care of the Department of Family Services.

“Sarah wanted to do something on her own to give back to the community,” says Linda. “She’s setting a great example for other young people that it’s never too early to give back in whatever way that you can. We’re very proud.” 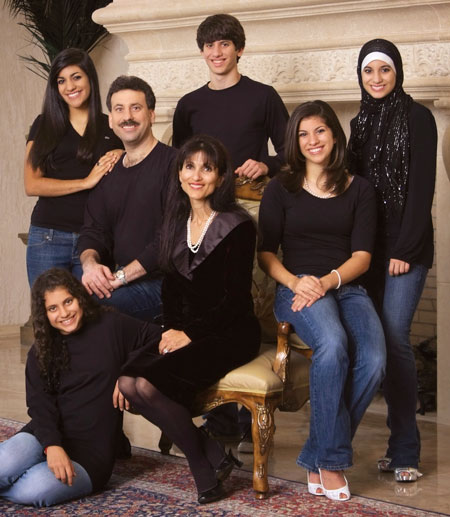 Giving back is a family tradition for Riadh and Manal Fakhoury.

“I learned the art of giving back through the example of my parents who were both very philanthropic in many ways,” says Manal. “I was one of five children, and as each of us went off to college, my father would sponsor a needy student who would come to live with us. When you’re exposed to that kind of a giving nature at an early age, it’s just something you in turn do naturally.”

“I was brought up to give back to the community,” Riadh agrees. “I was taught to make myself available in whatever way possible to help another person.”

In addition to raising funds, the Fakhourys are also focusing this year’s campaign on increasing awareness throughout the community on giving back.

“Everyone can give back something to the community,” says Manal. “It doesn’t have to be a large amount like most people think. Every little bit helps contribute to the larger good. The number-one reason people don’t give is because no one asks them. People are very willing to give.”

And mirroring their own lives, the Fakhourys believe giving can start early. As co-chairs of the campaign this year, they have established the Student Ambassador Program to enlist high school students in the cause.

“It’s our responsibility to help our fellow citizens in need,” says Riadh. “We can all find a way to ease someone’s burden.”

“Giving back enriches the community,” adds Manal, “and what you get in return is magical.” 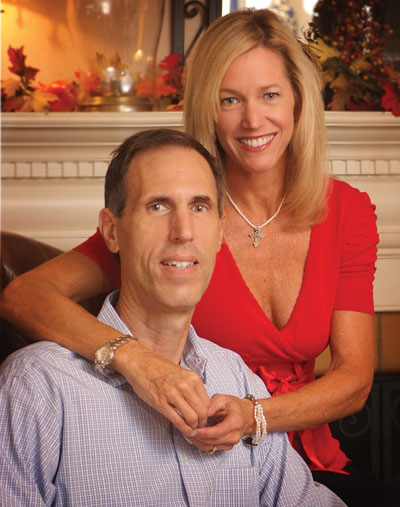 Involved with United Way for 20 years, Bill and Cyndi Chambers believe that you can tell a lot about a community by its level of charitable giving. And by their reckoning, Ocala/Marion County is a very compassionate community.

“Through my involvement with United Way, I’ve seen the difference people giving back can make in a community,” says Bill, a financial adviser for 28 years and this year’s Tocqueville Society chairman. “By making a contribution to United Way, a lot of very deserving charities in the area benefit. This strengthens our community.”

Cyndi, a successful professional photographer, began volunteering while in high school for the Special Olympics. Later, while at the University of Florida, she did volunteer work at Shands Hospital in the children’s ward. In addition to United Way, she’s also served on many community boards, but considers herself more of a “behind-the-scenes” type.

“Bill’s an excellent fundraiser, while I prefer to be given a specific job,” says Cyndi. “I’ll get it done.”

One of the unique ways that Cyndi gives back is through her photography, donating her time and work to various youth sports leagues.

“Charitable giving in any form is very important to a community,” says Bill. “As we all know, the downturn in the economy has hit hard for many people. Here in Ocala, where so much of our economy was construction-based, this is particularly true. So there are many, many people in our community who need help.

“For those of us who have been fortunate in our lives, I feel like it’s our responsibility to help those less fortunate. And it’s a great feeling to be able to help your fellow citizens in your community.”