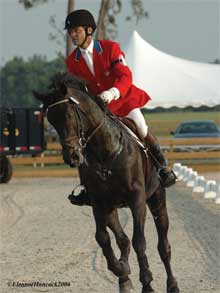 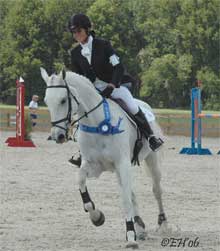 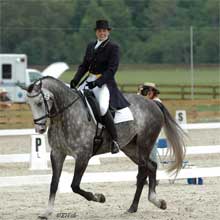 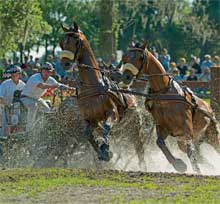 Talk about hitting the ground at a full gallop. Now in its second year of existence, the Ocala-based Florida Horse Park has already hosted four international shows, five nationally-recognized equestrian competitions, arena polo games, numerous charity trail rides, and many community events. And the good news is that the future looks even brighter.

Almost 15 years ago, the Florida Horse Park was approved and formed by the Florida Legislature. A board of directors was put in place, comprised of representatives of different breeds, equestrian, and agricultural interests. Unfortunately, the original building project carried a price tag of about $61 million. This daunting amount made it a serious challenge to get approval for state dollars, and as a result, the project, though well-intentioned, never got off the ground.

In early 2005, local businessman and horseman Tom Warriner took over as chairman of the board. Eager to fulfill the dreams of the original project and its supporters, a new board was put together and steps taken to help the long-awaited horse park become reality.

Area horsemen and Olympic level competitors, such as Chester Weber and Darren Chiacchia, had already expressed interest and Warriner believed the move to involve such well-connected horsemen, along with local business leaders, was vital.

The next step was proving that the park could indeed become a serious economic driver and a focus of tourism.

“Every single dime we’ve raised so far has come from private investors and local businesses and institutions,” Warriner notes. “Seminole Feed, a regional feed company in our community, was one of our first investors. We currently have over $5 million retail cost invested in improving the grounds.”

The park features a state-of-the-art all weather arena, high performance jump courses, and a marathon driving course. Totaling almost 500 acres, the park has about 300 cleared acres, and its location adjacent to the Florida Greenway provides access to over 100 miles of riding trails. This access to trails is one of the most unique aspects of the park and positions it as one of the nation’s prominent trail riding destinations.

Olympic-level riders and competitors typically spend time in the Florida sunshine, riding and training during the winter. According to Warriner, maintaining a relationship with such upper level competitors is a great benefit for park fundraising efforts. The United States Equestrian Foundation (USEF) has embraced the Florida Horse Park, which is now a USEF-approved training site.

It took less than a month following the ground-breaking on October 3, 2005, for the first major event to be held at the Florida Horse Park, and the activity hasn’t slowed since.

“The five nationally-recognized events held at the Florida Horse Park in 2005 have already brought in over $30 million for the area,” states Warriner. “Because we are an approved USEF-training site, we will be getting more major events which will bring national television coverage and more exposure. Now that we have evidence that we are an economic driver, sponsorships and business investments make sense. We are creating private/public partnerships every day and we want the private sector to benefit.”

Warriner points out that the prestigious Rolex Kentucky Three-Day Event, held annually at the Kentucky Horse Park, pours $110 million into the economy in just one week. Unlike the Kentucky venue, the Florida Horse Park can operate year-round, and Warriner expects it to have an economic impact of anywhere from $200 to $300 million annually for our region.

The Florida Horse Park has now been identified by Visit Florida, the tourism arm of the state of Florida, as an official Florida attraction, which will bring increased exposure and advertising.

Warriner adds that the park is currently in conversations with the Emergency Operations Center for the state of Florida. The focus of the discussions is to have the park become an emergency evacuation site for horses during times of hurricanes and weather disasters in other parts of the state.

“Presently, horses are sent to Georgia during storm evacuations,” he notes. “We are now in a position to partner with the state and look at the opportunity to be a site for equine animal safety.”

The vision for the Florida Horse Park is lofty, but also realistic. While the park provides the community with an international caliber equestrian venue and excellent opportunities for family entertainment throughout the year, the main focus is on tourism and economic impact.

“In 2003, the Kentucky Horse Park had a $163 million impact on the state of Kentucky and that’s the kind of impact we are looking forward to in Florida,” explains Margaret Rowell, director of development for the Florida Horse Park. “We can have a much longer season here and also offer trail riding, thanks to the Greenway.”

Local businesses have been quick to grasp the concept of just how powerful an economic impact the Florida Horse Park can generate. A new hotel, a Cracker Barrel, and a Zaxby’s restaurant are already under construction at the I-75 and State Road 484 interchange, the exit for the park.

“The success of the inaugural season laid the groundwork for the future,” notes Richard Hancock, executive vice president of the Florida Thoroughbred Breeders’ and Owners’ Association (FTBOA). “We’re excited about the great start we had last year and are expecting things to be even bigger and better this year.”

There are plenty of reasons to appreciate the Florida Horse Park and not all of them involve horses. The popular “Dozer Days” event, which benefits the Children’s Home Society, is held there. Trails are open to the public for walking and there is even a bike trail that runs through the park. Sam Baillie, park manager, lives on site and is happy to talk with visitors.

Admission to the park is free when there isn’t an event. Camping and stable amenities are available for a small fee and may be reserved by calling the Florida Horse Park office.

The major 2006 fall kick-off took place on the weekend of November 18 and 19 with not one, but two, nationally-recognized events. The Ocala Horse Trials, a three-day competition, and the Sunshine State Driving Competition brought international level competitors to the area. Spectators also enjoyed an art show and expanded vendor village throughout the weekend.

During events, park admission is $5 parking per vehicle and part of the proceeds benefit local charities.

The park is located less than 4 miles from I-75.