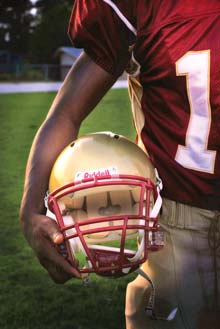 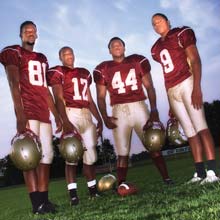 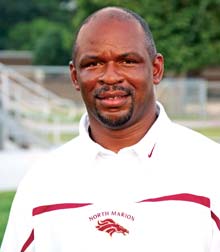 Blessed with a stable of ultra-talented skill players, plus an offensive line that returns intact, the Colts are primed for another push towards a title. The consensus is that this year’s group has the chance to be something special, even at a traditionally strong program like North Marion.

“We haven’t had a team like this one,” says Colts Head Coach Craig Damon. “Our fans expect nothing less than a state championship.”

The vast array of talent has led the Colts to tinker with its offensive philosophy and adopt the Florida Gators’ spread approach.

“We sort of modeled our offense after what Coach [Dan] Mullen does at UF,” says Damon.  “We want to get the ball in the hands of our playmakers, and let those guys make plays.”

And that will be the job of new quarterback DeMontrelle Smith, who starred as a wide receiver last year with 24 catches. Expect DeMontrelle to cast himself in the dual threat runner/passer mold this fall.

“DeMontrelle adds another dimension to our offense,” Damon says. “He can throw it to our playmakers or take it himself. When the lights come on, DeMontrelle shines.”

To succeed, DeMontrelle must utilize Albert Gary, who will shift from feature back to the slot. This change will enable the Colts to get him the ball in space, where his elusiveness will provide numerous mismatches. Gary has the ability to change a game in a multitude of ways—from rushing for over 1,100 yards, catching 21 passes for 215 yards, returning two kickoffs for touchdowns, and even passing (2-for-2 with a touchdown). Did I mention he accomplished all this despite a fractured collarbone?

“He’s got great speed,” Damon says. “Albert is one of the most gifted athletes I’ve ever seen at North Marion.”

GARY IS NOT THE ONLY PLAYER on the roster worth the price of admission. Darius Morgan, a 6-foot-4 wideout, has his pick of suitors at the next level. He has the physicality of a Terrell Owens at the pro level.

“My weakness is my route running,” Morgan says with a laugh. “I’ve learned to make better cuts, how to get low and keep a low sense of gravity. I’ve perfected it.”

Morgan’s length and strength are nearly impossible to defend in the red zone. He hauled in 41 passes last year and a team-high nine touchdowns. Coach Damon is effusive when recounting Morgan’s talent.

“Even when’s he’s covered, he’s always open,” he says. “It’s unbelievable how much progress he’s made in just his third year playing receiver.”

When defenses focus too heavily on Morgan, they’ll run the risk of allowing Tim Dandy to beat them. Dandy’s improbable leaping touchdown catch in the state semifinal loss last year to Pine Forest was worthy of a SportsCenter top play nominee and speaks to his remarkable athleticism.

“Everybody keys on Darius,” Damon says. “But Tim can beat single coverage.”

Feature back Ryan Williams is a load at tailback. Last season, Williams averaged 6.8 yards per carry and scored 11 times. Not many 170-pound high school football players can slow down the county clean-and-jerk record holder and state weightlifting champion.

While Williams was automatic in getting the tough yards last season, he’s worked on his quickness, shaving two seconds off his 40-yard dash time to about 4.8 seconds. He’s a high school version of Jerome Bettis—difficult to tackle with just one or two defenders.

“He [Williams] really punishes the defense in the third and fourth quarter,” Damon explains. “If teams try to cheat to stop him, we get one-on-one coverage outside. He’s a very explosive player.”

TALENT ABOUNDS ON DEFENSE, TOO, with three of four starting defensive lineman returning. Headlining that group is senior defensive end DeMarrio Sims. He racked up 111 tackles and an astounding 22.5 sacks during his junior year. Experienced returnees include linebacker LaRoyal Beard (76 tackles) and Albert Gary, who not surprisingly, is a star defender as well.

“It was probably the best thing that could’ve happened,” Damon says. “After all the hype in the papers, maybe they were reading too much into it.”

But this season has been a fresh start.

“We’re all determined to win this year,” Darius says. “We’re going to go out with a bang.”

After two 10-4 seasons, the pieces are in place for this ultra-talented squad. They are confident, enjoy one another’s company, and have their heads on straight. That’s a recipe for success in any sport.

It’s no surprise that on the printed North Marion schedule, the dates for every round of the playoffs are listed, all the way to the Class 3A Championship Game on December 14.

The Colts plan to be there, bringing their best game ever.

A Season Of Destiny
A Look At The Colts’ 2007 Schedule