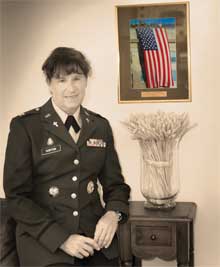 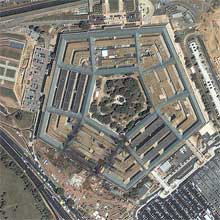 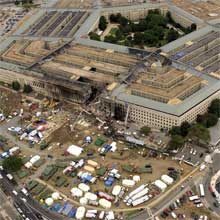 On September 11, 2001, Ocala resident and retired U.S. Army Chaplain (Col) Janet Horton was stationed at the Pentagon. Her account of this horrific day reveals how duty, courage, professionalism, and providence determined the outcome of what would be the most challenging day of her 28-year military career. This is her story:

On September 11, 2001, Janet Horton found herself sitting in the waiting room of the Pentagon dental clinic, awaiting the results of her annual x-rays. Though her birthday is August 11, the day the Army usually schedules this exam, her file sat on a desk for almost a month when a clerk noticed it, and made her appointment for September 11.

That morning, Horton was making her way through the maze that is the Pentagon when she ran back to her office to grab her Bible lessons, something to read while waiting. She was very familiar with the 7 1/2 miles of corridors that make up this massive building, as this was her second assignment there. The first woman to rise the rank of colonel in the Army Chaplaincy, Horton was serving as Executive Director of the Armed Forces Chaplains Board.

Like most waiting rooms, a television was tuned to CNN. Horton intently studied her Bible passages, not knowing that this collection of verses about fire, fear, and healing of wounds would — within the hour — soothe the severely burnt and traumatized patients to whom she would minister.

“While we sat there trying to figure out what was going on, the second plane went in,” Horton recalls. “There was a total hush, then someone ran in and said a plane had been driven into our building.”

It’s hard to conceptualize how a Boeing 757 jet airplane could fly into any building and not be heard or felt by everyone inside. But the Pentagon is not just any building. Consisting of five concentric rings of buildings, lettered A (the innermost ring) to E (the outermost), and connected by ten corridors, the Pentagon is nearly six miles around. In the center lies a five-acre grassy courtyard that is sometimes used for ceremonies and where employees gather for lunch.

Horton speculates that the hijacked American Airlines Flight 77 was headed for Ground Zero, the nickname given to the courtyard in the Cold War days when it seemed a logical and literal bull’s eye for Soviet nuclear warheads.

If the plane was headed that way, it missed.

Going in, Flight 77 clipped a post and cartwheeled in between the fourth and fifth corridors through buildings E, D, and C, starting a fire that would eventually fan through all five rings of buildings in that section. The relatively low casualty figures of the day — 184 people ultimately killed, including 64 on the plane — while tragic, are considered miraculous, thanks to that particular part of the Pentagon being under renovation, and therefore unpopulated.

“Hardly anyone had moved back into their offices, as the completion was taking longer than expected. That saved a lot of people,” she says, “including my secretary.”

Horton’s section was scheduled to move into the remodeled area, but the move date was put off three times. They were still located in the B ring by the fifth corridor when Flight 77 pierced the building, blasting debris through Horton’s inner office. She and many others avoided the blast by being out of the office for appointments — going to meetings, getting coffee, checking mail — but her secretary, Pam Grinstead, was at her desk. Upon impact, Grinstead ran for her life, in advance of a huge cloud that carried cinders, smoke, and debris.

If not for the one-month-late dental appointment, Horton would’ve been right there with her.

According to Horton, everyone was immediately evacuated from the building, her party exiting to the Potomac on the side opposite the impact area. Military Police teams worked quickly to secure the entire building and medical teams were assembled. Horton and the two other chaplains wanted back in, but the guards told them, “No one was going to be allowed back in and if we tried, we’d be arrested.”

Yet they knew there would be casualties and, as chaplains, they must be allowed to be in their right place. Seeing the medical teams forming behind them, the three fell in and tried to enter the building, only to be stopped at the turnstiles by guards. Recognizing a guard she knew from her previous duty at the Pentagon, Horton insisted.

“We had to get in and pray with those casualties. When I was there before, I used to bake cakes and pies for guards on duty over Thanksgiving and Christmas, so Mike knew me. He also knew doctrinally we were supposed to be in there.”

They ran to the center courtyard as medical teams began bringing out the injured and laying them on the grass.

“The building [E] was burning so hot on the outside, the casualties had to be brought in to escape the inferno,” Horton remembers. “People started coming out with burns over major portions of their bodies. Some people had their clothes partially or completely burnt off, but weren’t injured too badly. Most people had burns of some severity.”

Horton had been in hospitals with wounded soldiers, but this would be the first and only time in her career she ministered to casualties as on the battlefield. Relying on her training and using the only tool she had, the Bible passages she took to the dental clinic, she knelt by the injured one by one.

“I often started with the 23rd Psalm, ‘He makes me to lie down in green pastures; He restores my soul.’ People repeated ‘The Lord’s Prayer’ or any passages they knew. The calming effect was immediate,” recounts Horton. “Not one person refused prayer that day.”

One of the first people Horton prayed with was an Army officer named Brian Birdsong, who left a meeting that morning in the impact zone to stop in the men’s room further down the hall. It was a decision that saved his life.

The shockwave knocked Birdsong to the floor, and he caught fire from the jet fuel.

“He immediately thought of his wife and children, knowing he’d never see them again,” says Horton. “Then he said, ‘No, I want to live. God, can you help me?’ Sprinklers came on as he overcame the temptation to die.”

Fire doors closed him in darkness, but he crawled toward the sliver of light shining through the crack between the doors. Col. Wright, a friend of Horton’s, and two others were on the other side of those fire doors and broke them down, realizing if anyone was alive they were on the other side. Firemen helped to drag Birdsong out.

As the fireball progressed into the interior buildings, people jumped out of first- and second-story windows onto the cement between the buildings. Among them was Ltc. Marion Ward, who, according to Horton, had been the first to jump.

Because the civilians working in the building were panicking, not wanting to jump, Ward made the leap, damaging his ankles and his spine. He remained on the ground in order to break the fall for others who had to jump, while military personnel ushered reluctant civilians out of the windows.

When he was finally brought to the courtyard, Horton asked him if he wanted to pray. Ward said yes, but was naturally upset and distracted, stating he couldn’t feel or move his legs.

“I read from Romans 8:39 — ‘Neither height, nor depth, nor things present, can separate us from the love of Christ.’ He calmed down after that.”

A couple of weeks later, Horton was pleased to find Ward in his office, able to walk.

The teams worked quickly, evacuating all of the casualties by early afternoon. As hours went by and the rescue teams were no longer finding people alive, Horton admits, “At some point, you have to switch to mortuary duty.”

A makeshift mortuary was set up away from the injured on “a little concrete stage in the courtyard used for ceremonies.” During the switch, the chaplains searched for food to feed the firemen and found hamburger rolls and bottled water.

“It hit several of us at the same time,” Horton remembers. “The bread and water was like communion.”

On September 12, the military went to work as a show of resolve. Chaplains were stationed at the Metro portal outside the Pentagon to help those coming in.

“A lot of people were having a hard time walking into the building,” Horton says. “People looked up and just stopped in their tracks. We were there to try and help them overcome their fears.”

Having no office, Horton decided to roam the halls of the Pentagon and minister to anyone who needed her.

Upon further reflection, Horton believes the events of 9/11 demonstrated to her “the superiority of moral courage over animal courage.”