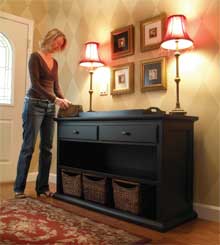 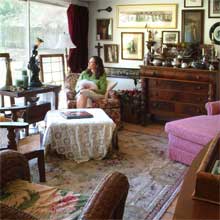 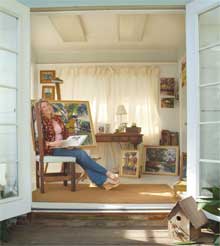 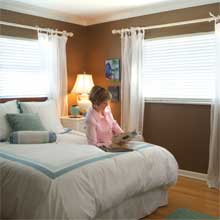 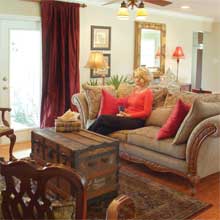 A funny thing happened on the way to a hurricane party — I discovered a story for Southern Living magazine. As the winds subsided, a terrific tale of friendship and creativity was brewing inside one Ocala home.

When Hurricane Charley turned its attention away from Marion County last fall, Hellen and Walt Driggers threw a spontaneous party for some grateful neighbors and friends. The Driggers had all the ingredients for a good post-storm party — food, friends, and, most importantly, electricity.

While sipping some wine and watching The Weather Channel, I overheard an interesting conversation among Hellen Driggers, Angie Blair, Donna Leeward, and Anne Rubin. Knowing they belonged to a book club, I attributed this discussion to the topic of their next read. But they were talking about paint colors, fabric swatches, and drill saws. What book were they reading? Life and Times of Home Depot?

Leeward, a landscape artist, whipped out a pencil and started drawing a sketch as the others chimed in with suggestions. The subject was a room in Blair’s home. Ideas started flowing like the rain outside. Within half an hour, Blair had a beautiful design for a transformed playroom. A date was set for the room’s conversion. They remodel it, too?

This was not the work of any ordinary book club. This was the creation of the Gypsy Chicks, an ingenious decorating club that had already produced several major renovations in each of their homes. That night, another design innovation was inspired.

And so was a story.

I had recently submitted a query letter to Southern Living. (By the way, a query means, “Please let me write for you!”) While speaking to their Livings Editor Carolanne Roberts in a follow-up phone call, I mentioned the decorating club. She loved it. In her words, this was a natural fit.

“The story just sounded right for us,” says Roberts, “Finding a story is something like finding true love. You absolutely feel it before your brain locks in.”

Roberts said the Gypsy Chicks was a group to which Southern Living readers could relate.

“The vitality of the women, their creativity, the diversity of their everyday lives, and the fact that our own readers could likely identify in the we-could-do-that-too vein came into play,” she adds. “In the final analysis, the gut reaction for the story turned out to be right on target.”

This nationally distributed magazine has attracted a vast readership for many years. Roberts said the Livings section is regionally designed with 42 annual sections. Five are about Florida.

“The Florida Living section shares stories about people and places in Florida,” notes Roberts, “We want Floridians to feel pride in the fascinating people in their own state.”

You just can’t get any more fascinating than this group. The Gypsy Chicks perfectly fit Roberts’ description.

In addition to Blair, Driggers, Leeward, and Rubin, Heidi Horosh and Kristi Lovell round out the dynamic decorating group whom I’ve known and respected for many years. Now I had the chance to share their story.

Oh, boy! Talk about pressure. I didn’t want familiarity to limit the story’s potential, so the real work began. There were several approaches to the article: the angle of creative vision realized through inexpensive design; the way to turn a domestic dream into a renovation reality with the help of others handy with power tools; the allure of warming one’s own home without breaking the bank. Yet the most inspiring part about the Gypsy Chicks is the story of a remarkable friendship.

When they’re together, the group’s energy is palpable. They share ideas freely, giving room for individual perspectives, while eventually forming a consensus. They understand how individual dreams begin with the germ of an idea and support from fellow dreamers. The Gypsy Chicks channel this vision through creating intimate spaces in each other’s homes and lives.

Although the common love of reading initially drew them together, the Gypsy Chicks use their individual talents to help each other inside and outside their homes. Blair credits the group with finding her dream job as a special-events coordinator. Leeward says the club has empowered her desire to help others through art.

And they all agree the Gypsy Chicks is a group about possibilities.

They’re Ready for Their Close-up!

After going through an extensive editing process, it was time to match words with visuals. This job was given to Mark Sandlin, Southern Living’s senior photographer. Sandlin flew into Tampa this past January and headed north toward Blair’s Ocala home. I was the lucky photo assistant and driver for the evening. For the next eight hours, the camera clicked and so did Sandlin’s rapport with the Gypsy Chicks.

“What I always enjoy the most is meeting the people I’m photographing,” says Sandlin. “This time, it was extremely intelligent and fun women. The Ocala decorating club has a fan club in Birmingham.”

A genuine bond was evident between photographer and subject.

“The photo shoot was one of those times of pure fun,” says Driggers. “Our only agenda was to have a good time!”

Lovell agrees. “We came together with hospitality in mind,” he adds.

Blair, a gourmet cook, prepared a feast fit for a photographer, then packed it up and took it to Driggers’ house for the second stage of the photo session. Six women, a photographer, and one writer found themselves in Driggers’ renovated guest bedroom. It was a sight to see and, according to Sandlin, photograph.

As the shoot concluded, an impressed Sandlin thanked the club for their generosity and said he hoped to return to Ocala someday. According to Rubin, the feeling was mutual.

“I was very impressed with Southern Living’s professionalism and attention to detail,” adds Rubin.

The Waiting is the Hardest Part

Roberts contacted me the following week, saying the story was scheduled for the April 2005 issue. She said the Gypsy Chicks’ charisma resonated in Sandlin’s superb photos.

“The delightful decorating club made the photo shoot fun,” says Roberts. “In fact, the photos are so good that the cover of our Florida Living section will feature the Gypsy Chicks of Ocala, Florida!”

With a publication date in sight, all we had to do was wait, an impossible task for the Gypsy Chicks who began to plan a celebration. Perhaps this is what I love best about this creative crew — they always find a reason to celebrate life and each other.

Gypsy Chick member Horosh says it best. “How can you top having such great friends, getting your home decorated, and then having the story told in a national magazine?”

Author’s Note: As a little girl, I remember when my mother’s Southern Living subscription arrived in the mail. She’d read it from cover to cover, legs curled up on the couch, oblivious to life and little children around her. I’ve been modeling this behavior for years, subscribing to the magazine since the time I earned my first paycheck. Admittedly, I’ll probably rush more quickly to the mailbox this month in anticipation of one particular story by a writer grateful to have been invited to a hurricane party. And even more grateful to know six extraordinary women who call themselves the Gypsy Chicks.

Can’t Get Enough Gypsy Chicks? Read more from Amy Mangan about the Gypsy Chicks in the April issue of Southern Living, on newsstands now for $4.99. Then look inside for the special section for Sunshine State readers, called Florida Living, where the ladies grace the cover. Also, be sure to check out Southern Living Senior Photographer Mark Sandlin’s colorful shots from the January shoot. Way to go, Gypsy Chicks — and Amy!