Sure, everyone’s heard of a bar and grill. But how about a hardware and grill? 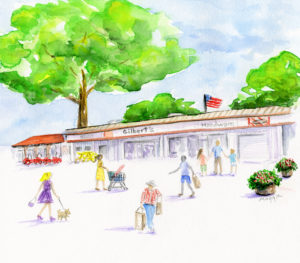 Welcome to Gilbert’s Hardware & General Store. Or simply Gilbert’s as it’s known by longtime regular customers. Sitting right smack in the middle of horse farm country in northwest Ocala on the corner of County Roads 225A and 326, Gilbert’s has been part of the rural community for more than three decades. And, yes, tucked away just beyond the bins of bolts and screws, tools, and lawn and garden supplies is a full-service deli/grill.

“My father likes to say that we’re a place where you can get a hammer and a hamburger,” says Tommy Gilbert, who runs the day-to-day operations of the business his father Tom established in 1986. “Having a deli and grill wasn’t planned. But when we expanded in 1996, we tripled our size to more than 12,000 square feet. Then I noticed that one side of the building wasn’t getting much foot traffic. So I thought maybe adding a convenience store element would help with that. And that led to the deli and grill in 2004.”

As word of mouth spread of the eatery addition, Gilbert’s became a one-stop shopping and dining location. You could indeed buy a new garden hose then have breakfast or lunch. There are eight picnic tables, four inside and four outside. There’s also a bar counter with five stools. The deli/grill is open six days a week: 7am-2pm Monday through Friday and 8am-1pm on Saturday.

“When we decided to do this, the most important thing for me was to have fresh, quality ingredients. We wanted to serve and sell good food,” says Gilbert, who began working in the hardware store while a sophomore at North Marion High School. “And, of course, you have to have a good staff. Delories Mitchell, or Miss Delories as everyone calls her, is in charge of our deli and grill. Sometimes I even pull kitchen duty.”

Gilbert points out that “there’s a lot of early morning prepping so that by lunchtime the hot and cold deli cases are full. If you don’t have time to sit down, you can just grab something and go.”

And for those who enjoy getting started with the most important meal of the day, Gilbert’s can take care of that, too.

“Breakfast sandwiches are very popular. Homemade biscuits and gravy is our top seller. Of course, a lot of people like to come by for coffee and visit with friends,” says Gilbert. “My dad, who officially retired last year, still comes by every morning to do just that and keep an eye on things. He’s still very much involved. We made a deal that we do everything 50-50 and he holds me to that.”

The lunch specials are posted every day and are usually sold out by 1pm.

“Probably our most popular lunch items are fried chicken, Philly cheese subs and hamburgers,” says Gilbert. “Customers love our hamburgers. We use 100 percent Angus beef and we’ll cook it to order. Around lunchtime every day, you can walk in and smell a hamburger cooking. I suspect that helps us sell a hamburger or two.”

Of course, a hamburger needs french fries or maybe beer-battered onion rings. And if you’re looking for something lighter, there are salads—tuna, chef or chicken. Gilbert’s even has a liquor license; beer and wine are available in the market. And if you have a party coming up, Gilbert’s offers specialty hot wings.

Now 15 years in, Gilbert sees the success of the deli/grill as just part of the philosophy the hardware store was founded on.

“When my father started this business, there was absolutely nothing out here but a few farms. For entertainment, we’d sit outside and look at each other,” he says with a chuckle. “But my father paid attention and listened to what people needed; he built his inventory on customer requests. We have continued to follow a customer service-first business model.”

As Gilbert’s has grown over the decades, there have been changes in the surrounding area.  Nearby stalwart thoroughbred operations such as Bridlewood Farm, Jacks or Better Farm and Hartley/DeRenzo Thoroughbreds remain. But they’ve been joined by the Equine Medical Center, right across the road from Gilbert’s on property that used to be a thoroughbred farm. All are customers of Gilbert’s. To the south, the World Equestrian Center is being built.

“We have been part of this community for a long time and we’ve thrived because we pay attention to the needs of our customers. When you live in a rural area, convenience is a big thing,” says Gilbert. “Whether it’s a longtime customer or a new one, we want to be able to provide what they want and need, from the hardware store to the deli/grill.” And that includes an order of french fries with nails to go.