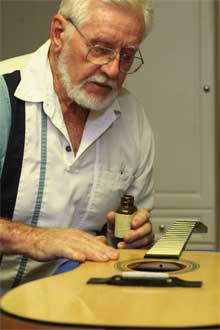 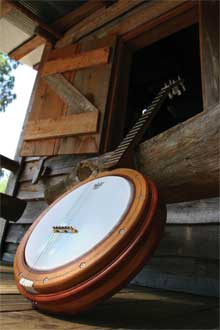 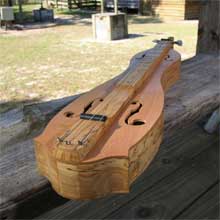 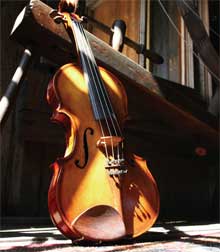 In an age where most stringed musical instruments are mass produced, it’s especially rewarding to find instruments that are totally hand crafted. That’s why you won’t find Larry Schorfhaar’s banjos, guitars, mandolins, fiddles, and hammered dulcimers hanging in any music store. It’s not that they couldn’t compete. It’s because they are works of art, coveted by local musicians and collectors alike.

A carpenter by trade, Larry says he drifted into making string instruments 35 years ago — first repairing them, then building them from scratch. His first was an Appalachian dulcimer. Noting his fascination with the instrument, Larry’s wife, Boots, sent off for the plans and Larry’s fascination quickly turned to obsession.

“I built one and then another, then three-dozen of the things,” he recalls, “I never really had plans to sell them. I just wanted to own one.”

A couple of years later, Larry felt confident enough to show off a variety of his instruments at a Brick City arts-and-crafts show; then he got “Best in Show” at a show in Bunnell. Other shows brought him even more recognition — ribbons and cash prizes of up to $1,000. Confident they had a product both unique and marketable, Larry and Boots decided to open a side business, Neilwood Instruments.

When he wasn’t working as a carpenter, Larry could be found spending nights, weekends, and just about every spare moment in his backyard shop building instruments, perfecting his craftsmanship while experimenting with various woods and finishes. He is totally self-taught and admits to having the innate ability to just look at an instrument — or a picture of an instrument — and being able to copy it down to the last detail.

“I learned how instruments go together by taking others apart and doing repair work,” he says. “That teaches you an awful lot.”

His wood of choice is usually hard maple for the violins, walnut for the dulcimers, and black cherry for the guitars and mandolins.

“The cherry is not well-known,” he says, “but it works well.”

Larry admits that some of his early attempts at building instruments fell a bit short. There were, he says, some “calamitous failures,” but he considers them part of the learning experience.

Larry buys his wood from local tree surgeons, then planes the pieces down to near wafer-thin slices. From there he uses either steam or dry heat to bend and shape the wood that makes up the curved sides of the instruments. He then places the pieces into a mold and glues them together. Add in the time it takes to sand, carve, apply the finish, and attach the hardware, and Larry says he may spend upward of 150 hours on a single instrument like a mandolin, and 200 hours on a fiddle. Larry has made so many string instruments he says he’s lost count, but guesses somewhere between 300 or 400 total.

In the early years, after amassing a small inventory of instruments, Larry and Boots would hit the road — by car or camper — making the rounds of various Florida arts-and-crafts shows. The uniqueness of their instruments, amidst all the other mostly decorative crafts, helped to set them apart. Larry says their participation in the Gainesville art shows has proved exceptionally successful, because many in the crowd are musicians.

“There will be somebody who comes by and plays a good fiddle,” says Boots. “That attracts a lot of attention.”

Tammy Murray, a Gainesville music teacher, performer, and recording artist who holds the title, “National Old-Time Banjo Picker Champion,” purchased one of Larry’s fiddles at an art festival in McIntosh 15 years ago. The instrument, she notes, is unusual because it’s made from curly beechwood, a non-traditional material. Most fiddles, she explains, are made from hard maple.

“I liked the voice of it,” she explains.

Tammy says that when selecting a fiddle, looks and tonal quality are not as important as how the instruments plays, how it feels, and how it handles. For Tammy, who owns two 100-year-old fiddles and is a member of Patchwork, a Gainesville old-time string and folk music band, Larry’s fiddle has a specific benefit.

“It has a very good ability to carry outside,” she says, “especially when there is no outdoor microphone system.”

As much as Larry likes to build instruments from scratch, though, he also likes to search flea markets, yard sales, and antique fairs for used instruments that he can repair or restore.

Then there was the fiddle that arrived in a bag, smashed into more than a hundred pieces. As Boots tells it, the owner had gotten into a row with his wife who ran over it with her truck.

“He had every piece, except one,” she says. “Larry was able to put it back together.”

Not content with just building and restoring string instruments, Larry has endeavored to learn how to play them, although with mixed results.

“When Larry took up the fiddle,” Boots recalls, “the dog and I almost left.”