Home maintenance costs and chores are history for tenants at The Estates at Hawthorne Village of Ocala.

“I always thought if I was alone, I’d want to live in an apartment,” says Saul Posner, who was ready to quit worrying about yard work, termites, sink holes, hurricanes and all the other variables that come with homeownership in Florida. 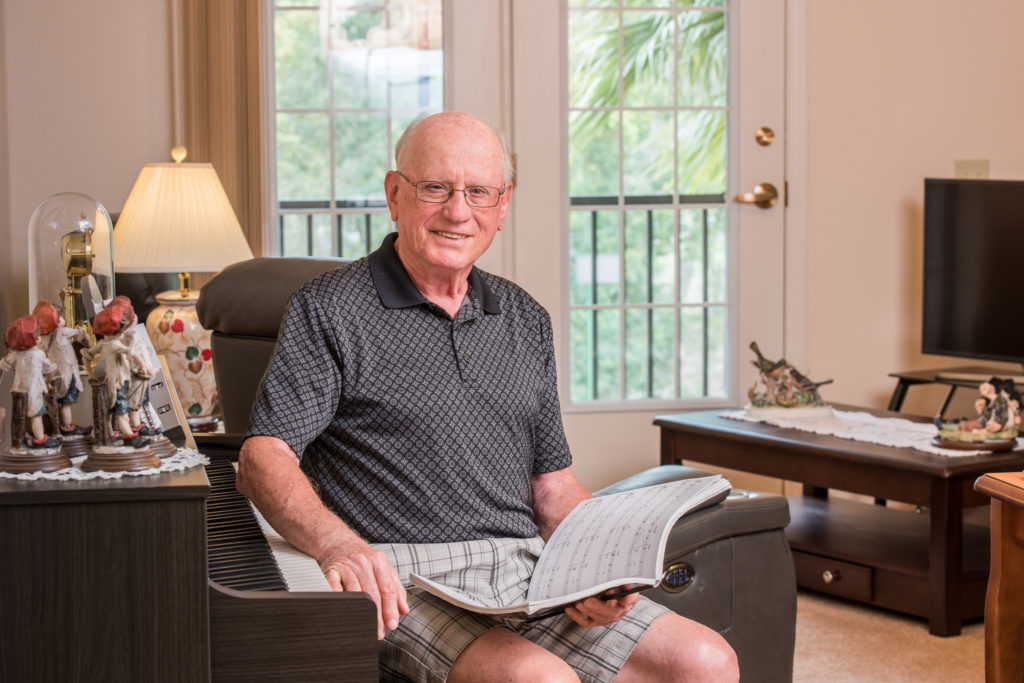 Originally from the Bronx, New York, Saul served in the Army for three years and worked as a postal supervisor for the U.S. Postal Service for 38 years. Upon retiring from that career, he and his wife Inge moved to Florida in 1990.

Saul and Inge were married for 49 years and after her passing last January, Saul knew it was time for a change. He was more than ready to give up the burdens of owning a house. After visiting several independent living communities in Marion and Sumter Counties, he found The Estates at Hawthorne Village. Thoroughly impressed with both the management and the amenities, he sold his house in the Dunnellon area and moved in November 1, 2018.

“This is close to where I lived and to all the things I’m used to doing,” says Saul, 84, who maintains a very active lifestyle and drives to a variety of regular activities. In addition to playing golf with a group of men twice a week, he plays poker two times a week.

“I take piano lessons once a week and play cards here three times a week,” he adds, noting that he also reads a lot, and follows professional golf and NFL football (Go Bucs!). Saul walks two miles four or five days a week around the neighborhood and works out at the on-site gym, AJ’s Fitness Center, two to three times a week.

Saul’s beautiful one-bedroom apartment home is on the third floor, and being one of those health-minded tenants, he often takes the stairs for exercise instead of the elevator.

He makes his own breakfast and on occasion will cook another meal, but Saul appreciates that he never has to worry about lunch or dinner, since all he has to do is walk down to the dining room for those meals.

“It wasn’t hard for me to downsize. This is like living in an apartment in a hotel,” says Saul. “I have two sons who live in Georgia and California, so I don’t have family in the area, but the people here–staff and tenants–are my family now. The manager Elizabeth is wonderful and Jeannette, (the concierge), is so friendly. If there’s anything you need, they’ll help you.”

After Mack, her husband of 65 years passed away, Joan Smith had to admit there were things she just couldn’t do when it came to maintaining their house. 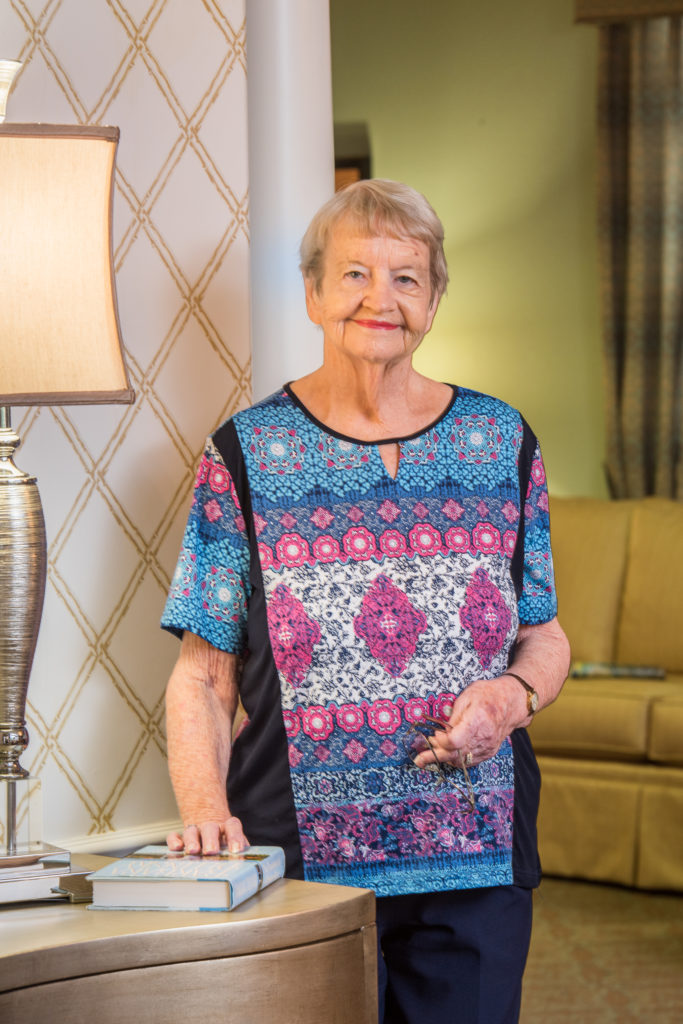 Florida had been home to Mack and Joan ever since they moved to Orlando from Missouri in 1960 for Mack’s job with Martin Marietta. They later built a house in Marion Oaks and moved to Ocala, which was where Joan found herself living alone after Mack died. Realizing that her back pain also made it hard for her to cook meals and do housework, the mother of five talked it over with her children. They all agreed it was time for her to move to a place where she could live independently without the hassles of home upkeep and daily chores, a place where she could just enjoy life.

“We have four daughters and one son, but Wendy is the only one who lives near by,” says Joan, 84. “She and I looked at different places and this was the nicest. I liked the size of the apartment and the idea that you could get meals twice a day. The people are so friendly, both residents and staff.”

In May of 2018, Joan made the move to The Estates at Hawthorne Village where she quickly settled into her second-floor, one bedroom apartment home, which she outfitted with some of her favorite pieces of furniture. She has a screen-enclosed balcony where she keeps potted plants and can easily step outside for a breath of fresh air.

Joan still drives, but her daughter, Wendy, usually takes her to doctor’s appointments and they frequently go on outings together.

There’s no shortage of socialization for The Estates’ tenants and Joan participates in several of them.

“I go to a Bible study every Saturday morning and I like going to movies in the media center three nights a week,” she says.

Not having to cook if she doesn’t feel like it has been a blessing. She appreciates that there are two entrees to pick from at lunch and dinner, and that there’s always fresh fruit and salad. She looks forward to the brunch on the first Sunday of every month, complete with a great variety of breakfast items and even a chef who prepares omelets and such to order.

Since Joan is not an early riser, she especially likes the fact that continental breakfast is now available Monday through Friday from 8:30 to 9:30am. Some mornings she’s only in the mood for coffee and a pastry, but cereal, toast, fresh fruit, yogurt, granola and hard-boiled eggs are also available.

Even better, if Joan doesn’t feel like going to the dining room for the continental breakfast, she can still enjoy socializing with her friends by attending the Mug Club, held twice a week in the common living room area on each of the “neighborhood” floors.

At Mug Club, the tenants enjoy hot coffee or tea and a nice selection of homemade baked breakfast treats while they casually sit and visit with one another. It’s just another of the many things that confirms to Joan she made the right choice when she decided to make her home at The Estates of Hawthorne Village.

Hawthorne Village of Ocala is a not-for-profit, full-service retirement community, conveniently located near the Paddock Mall, major health care providers, and a variety of cultural and historical venues.

The Estates of Hawthorne Village offers exquisite apartment homes for the independent retiree who seeks an active lifestyle with an all-inclusive monthly rent. Worry-free and maintenance-free living awaits you at The Estates, as weekly housekeeping and linen service, two restaurant-style meals per day, transportation to medical appointments and scheduled life-enrichment activities are just a sampling of what is available to the tenants.

The Inn at Hawthorne Village of Ocala is a lovely, home-like setting for those individuals who need assistance with daily self-care in a supportive and attractive environment.

As part of a full-service retirement community, Hawthorne Village of Ocala provides a full spectrum of care to meet all of your health care needs, including the state-of-the-art inpatient and outpatient Bounce Back Rehab and skilled nursing center—all of this, on one beautifully manicured and easily accessible campus.