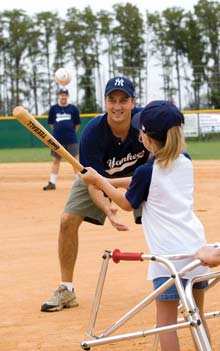 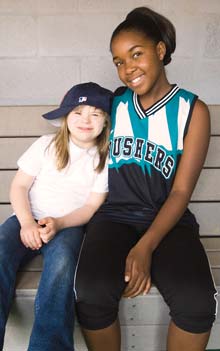 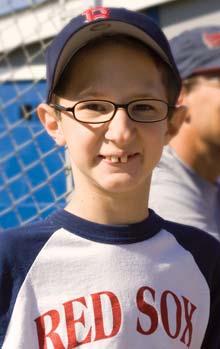 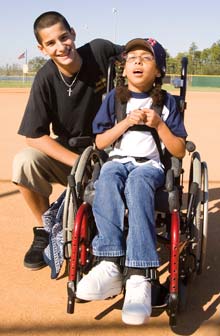 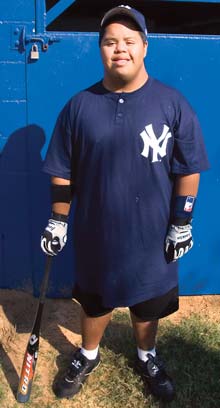 At first glance, it looks like a normal baseball game. Players are wearing uniforms that read either the Yankees or Red Sox. They are also wearing baseball caps, some have batting gloves, their own bats, and special socks. Well-oiled gloves are ready at their sides in anticipation of that pop fly or grounder to find its way to them.

The infield at South Lake High School’s field is peppered with players and their buddies—about 20 in all. The outfield was empty, but the bleachers are filled with parents, grandparents, and friends.

The rules: There are two innings. Every player bats, hits, and crosses home plate each inning. Everyone fields the ball. And outs do not exist.

This isn’t your usual baseball game.

Welcome to baseball in the Central Florida Miracle League of South Lake.

The league, which is an offshoot and under the umbrella of the Orlando chapter, consists of players with disabilities ranging from bipolar disorder to autism. Some are in wheelchairs and others use walkers. They are between the ages of five and 26.

The CFML of South Lake is a bit different than others in the network. There are two teams of older players (14-26) and two teams of younger players (5-13). Most weeks, two games are played.

“You wouldn’t believe it,” says Brenda Koronka, vice president and co-founder of the CFML of South Lake. “These kids love this.”

BEFORE THE PLAYERS ARRIVE on Saturdays, Kerry Whetro, board member of the league and athletic director and baseball coach at South Lake High School, drags the field and secures the bases in their proper places.

“We treat it like a normal day at the office,” he says.

It isn’t long before the players, their buddies, who are there to assist the players, and fans arrive for the game that usually starts at 10am.

Kerry says lots of buddies come out to help. So much so that sometimes all the volunteers can’t be used, so they cheer the players on from the stands.

“It’s an eye-opening experience,” he says. “It puts things into perspective.”

Brenda adds that buddies, often boys from Green Isle Children’s Ranch, are indispensable during the game.

“They go out with them [Miracle League players] to their positions,” she says. “Buddies will help with batting if needed; push wheelchairs; stop the ball with their foot, so they [the player] can throw it. They’re someone to talk to.”

THE COACHES, MUCH LIKE the players, have been personally affected by participating in the league.

“My focus is not baseball fundamentals,” he says. “It’s just seeing that the kids have fun—to make sure that they know they have value.”

Bryan was quick to point out that he has known some of the players for at least one year.

“You look forward to seeing the kids,” he says. “You really don’t care about baseball. You can’t beat the rewards of the faces on the kids.”

Mike Ryan, coach of the Yankees (14-26) and teacher of the Trainable Mentally Handicapped at South Lake High School, has coached since the leagues inception in the fall of 2006. Mike says his love of baseball and for his students at South Lake made the choice of heading up one of the teams a “no-brainer.”

“It makes my day,” he says, “just to see them participate and have fun.”

Scott Smith of Groveland says his daughter, Judith, 21, has played the game for three seasons. He says his daughter, who has Down syndrome, enjoys writing stories all day long. But come Saturday, Judith can’t wait to get to the field.

Judith, a 2005 graduate of South Lake High School says her specialty is hitting, adding, “I got muscles, too.”

TONY FERRIS, A FATHER OF ONE OF THE PLAYERS, serves as the game’s announcer and alternates dugouts, depending on who is up to bat.

“The players come out and look at me, waiting for their names to be announced,” Tony says. “I’ll usually give a nickname or something a player likes. We have a good time with it.”

Abbey Gomes, 19, plants her feet at home plate and shakes her bootie, a signature move that she does each time prior to swinging. The Red Sox player has Down syndrome.

Anne-Marie Cyr, 9, takes to the field with her buddy, 13-year-old Jasmin Thompson, who is a catcher for the Crushers. At times, Anne-Marie likes to be twirled and plays with her buddy. But when the ball comes her way, Jasmin will stop it and Anne-Marie will throw it. If the player at bat is older, buddies will step in front of the players to protect them.

“It’s fun,” Jasmin says. “I get quite a workout and Anne-Marie enjoys it. I am really happy when she has fun.”

Anne-Marie has Down syndrome, but she doesn’t let that stop her. Her mother, Lynn Cyr, says that usually during the summer her daughter will ride horses. During the spring and fall she says her daughter tells her, “‘I want to play baseball.’ It’s all about baseball.”

Lynn says Miracle League “gives her daughter that normalcy—basically that she’s a typical kid. This is big for them.”

The sound of the bat hitting a ball stops all chatting and everyone cheers the player on.

In between batters, coaches, who pitch the ball—underhand for the youngsters and either underhand or overhand for the older players—throw grounders to the infield. Players will toss the ball back to the coach or to another player.

Alicia Saucier, 12, and her buddy Maddie Ryan, 10, have played each game together since the fall of 2006. The pair shares a mutual admiration.

“I feel protected by her,” Alicia says. “She is so strong.”

Alicia’s mom, Jennifer Saucier, says she is thankful for the Miracle League.

“It’s wonderful,” Jennifer says. “It gives the kids a chance to come out and play on a team. When the season ends, Alicia can’t wait for the new one to begin.”

Alicia, who has cerebral palsy, says, “I never knew that I would be able to play baseball with my disability.”

Maddie attended Alicia’s graduation from Clermont Elementary School and she also wrote a school speech about the Miracle League that won second place.

Just after crossing home plate, Blake Isbell, 12, runs to the bleachers and points to the field, saying, “Did you see that? I hit the ball out there. I stole third base to home plate.”

SANDY CASTOR, HOUSE MOM AT GREEN ISLE Children’s Ranch, says 12 to 14 of the boys have been buddies for three seasons.

“It helps the boys get the focus off themselves and onto others,” says Sandy. “The boys enjoy it. They talk about it when they get back in the van.”

Erik DeJesus, 14, was back for his second season. His buddy is Amelia Doucette, 8.

The Central Florida Miracle League consists of players with disabilities ranging
from bipolar disorder to autism.

Cathy and Jim Doucette adopted their daughter, Amelia, at birth. She has cerebral palsy. Her mother says that her daughter loves to play baseball and her favorite part of the game is catching the ball.

“She’s out with other kids,” Cathy says. “It’s not about therapy time or school time. She gets to have a good time with all the other kids.”

Kenneth Ramirez, also known as the Home Run King, hit a line drive that just missed the coach and then proceeded to run so fast that he overran the other base runners. He was able to get back to second safely.

Before the game, Kenneth, 17, who has Down syndrome, puts on his gear, which includes his Yankees jersey, ball cap, batting gloves, and special socks. He has his special first baseman’s glove and his bat. His mother, Imelda, tells him that he doesn’t need all of that stuff.

She says his response is: “‘Mom, I play baseball. I need everything.’”

Brenda Koronka is pleased that the community is behind the Miracle League.

“South Lake High School offered its softball field for the games,” she says. “The shop class at South Lake built benches for the practice field. The material was donated by Home Depot in Clermont. This is a wonderful community. By working together for the league and the kids, everyone is a winner. ”