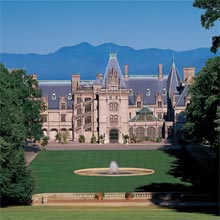 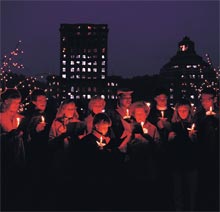 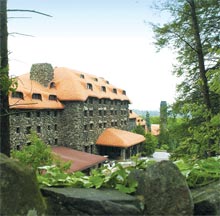 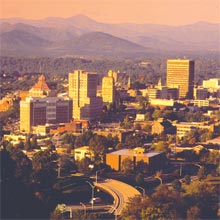 “America is the only place where miracles not only happen, but where they happen all the time.”

Whenever I travel, I always envision myself actually living at the places I go. So when my wife and I decided to trek up to the North Carolina mountains not too long ago, Asheville was no different.

Many other writers, more famous than I, had obviously felt the same way. Of course, favorite son Thomas Wolfe grew up there, but others like F. Scott Fitzgerald and Carl Sandburg had fallen victim at one time or another to Asheville’s mesmerizing, intoxicating charms. I would soon learn why.


Asheville is a mysterious, beguiling city. After following the slingshot of highway known as I-40 through Knoxville, it appears less than 90 minutes later out of the mist, emerging as a respite of culture, nestled, bowl-like, between the Great Smokies to the west and the Blue Ridge Mountains to the east. Her skyline seemed sluggish this particular morning, though, sharp edges creasing the horizon, streaks of morning still penciled in the rapidly disappearing clouds.

For years, Asheville has inspired and tempted those who spend a few hours strolling her shops, dining in her restaurants, and taking in her sights. The modern lines of the distinctive architecture seem to melt into the surrounding wilderness with gentle ease, as if carved from some mighty pieces of granite and timber. Asheville doesn’t merely invite — she beckons.

With a newly made mix CD of Alison Krauss playing in the car stereo (which seemed only appropriate) and a handful of tourist brochures, my wife and I were more than ready to discover why Asheville had long been considered the Paris of the South. I wondered, with only a travel feature to pen from these adventures, would the ghosts of Fitzgerald and Wolfe guide my words?

I was sure hoping they would.

History On A Hilltop

The perfect example of this blend of past and present is the Grove Park Inn Resort & Spa. A haven for the wealthy and adventurous since 1913, it boasts a façade that seems to fall into the abyss below. No camera can do this view justice — you must be standing at the apex above the gardens in order to fully appreciate the inn’s awesome perch over the peaks and valleys below.

Most of the 510 rooms and suites feature a simpler variant of this spectacular shot. Ours, which housed Daniel Day-Lewis when he filmed The Last of the Mohicans in the nearby mountains in 1991, offered a generous frame of the horizon anytime we opened the drapes.

Others afforded different opportunities. Whenever Fitzgerald stayed in Asheville to care for his ailing wife and work on his writing, he would usually occupy Room 441, which overlooked the cobbled entrance. From this vantage point, he could easily spot the arriving guests, especially those who were female, attractive, and preferably single.

Even though the Grove Park offers history at seemingly every turn, it also more than accommodates the present. A 40,000-square-foot spa opened in 2001 and quickly became one of the most highly regarded in the country. With several indoor stone chambers that feature cascading waterfalls and mineral pools, the spa is a destination unto itself.

We wisely scheduled an appointment for the spa weeks in advance. Our package included a leisurely massage, a cleansing sauna, and an invigorating exfoliation treatment, and we each emerged refreshed and relaxed. After enjoying the indoor pools and a pre-dinner cocktail on the outside terrace, we were more than ready for the promise of an incredible meal.

We opted for reservations at Chops, arrived at our appointed time, and were quickly seated at a table on the outdoor veranda. Our meals were incredible and the wines paired beautifully, but what I remember most about the evening was the sunset, a brilliant glow that passed through the veils of the twilight into the hollows of the Blue Ridge Mountains.

Emerging From The Mist

The mountains are a famed part of the city’s colorful history. By 1850, Asheville was well known as a health resort due to the crisp air, incredible vistas, and abundance of nearby sulfur springs. These facts drew the wealthiest Americans of the day and Asheville quickly became a bustling center for the urbane and sophisticated traveler. Franklin and Eleanor Roosevelt, Thomas Edison, and George Vanderbilt were all frequent guests, taken by the city’s mix of healthy living, culture, and the arts.

When the railroad traversed the treacherous terrain and reached Asheville in 1880, power and influence were among the passengers. Vanderbilt declared the area as “the most beautiful place on earth” and soon bought 125,000 pristine acres for what was to become home to the largest residence in America, the Biltmore Estate.

It was also the next place on our itinerary — almost.

A Room With A View

First, we needed to check into our next set of accommodations, the expansive inn that sits on an elevated field adjacent to the estate. Resting on some of the most valuable real estate in Asheville and built just a few years ago, the Inn on Biltmore Estate exudes a genuine aura of relaxed elegance.

With 213 finely appointed rooms and suites, I wasn’t sure what ours was going to feature. But I should’ve guessed that it would be incredible. The bellman took our bags into the room and pushed back the drapes, revealing a remarkable vista of the gently sloping gardens and a prime view of the Biltmore’s graceful back elevation, which resembled a postcard I later saw at the estate gift shop.

Not even the family of deer I saw on the trails around the inn the next morning rivaled the continuous view offered from our suite. And it only got better in the evening, when the soft glow of the Biltmore faded into the blackness of the Carolina evening.

The view from our room was really just the beginning, though. The Biltmore Estate is even more impressive upon closer inspection. Please keep in mind that a full tour of the estate and the gardens, especially with a delightful lunch on the grounds, is a very full day. But one that’s well worth the time.

For anyone who likes studying history or enjoying the opulence of a bygone era, the Biltmore is a marvel. The 250-room French chateau presents room after room of discoveries — like the library of more than 20,000 volumes; the priceless art by Renoir, Whistler, and Sargent; the tapestries worth thousands; and the innovative designs that were way ahead of their time. The Biltmore boasted electric lights and telephones when most Americans were still using oil lamps and communicating by mail.

The Biltmore gardens are not only lovingly tended but are cleverly designed. Vanderbilt personally commissioned Frederick Law Olmsted, who designed New York’s Central Park, to serve as the landscape architect for the massive project. Even more than a century later, the Biltmore gardens are a botanical masterpiece. Be sure you take a proper tour.

Also worth noting is the Biltmore winery. With complimentary tastings and an informative tour, learn how the winery shed its humble origins as a dairy and now produces vintages that are highly regarded nationwide. We tasted many charming varieties, but the Sauvignon Blanc, the Chateau Reserve Chardonnay, and the American Riesling were exceptional, the latter offering a crisp, fruity, and slightly sweet bouquet with an exquisite finish.

Judging by its schedule of events (see sidebar), the Biltmore is really a year-round pleasure. Christmas on the estate is, of course, magical, while other seasons offer their own unique charms. Highlights of spring and summer include an Easter egg hunt, the Festival of Flowers, a jazz weekend, and a Roaring Twenties party. Fall offers nature’s palette of changing leaves, a winery weekend, and the English Harvest Fair.

But Asheville is so much more than just the Biltmore and Grove Park. We enjoyed spending an afternoon in the historic downtown district perusing the distinctive shops, dining at the charming cafés, and taking in the outstanding local museums.

I regretted not checking the Asheville Tourists’ schedule prior to our arrival. The team was at home during our stay and I would have enjoyed spending a crisp Carolina evening watching baseball under the stars. A minor-league affiliate of the Colorado Rockies, the aptly named Tourists have played at historic McCormick Field, located right on the river with an impressive outfield view of the Smokies in the distance, since 1924. Talk about a field of dreams!

An additional regret includes not having enough time to check out Asheville’s diverse cultural scene. With a vibrant community theater, the Asheville Symphony, and several local dance troupes, the city promises a high-caliber evening of entertainment on most weekends.

We did get to do a little sightseeing, though. We drove the scenic Blue Ridge Parkway to the peak of nearby Mount Mitchell, a view that encompasses hundreds of miles and several states from the lookout at the very top.

Of course, Asheville also offers numerous nearby opportunities for outdoor enthusiasts of all skill levels. The Appalachian Trail; whitewater rivers like the French Broad, Pigeon, Nolichucky, or Nantahala; and some of the highest mountain peaks in the eastern U.S. all await the adventurous and the brave.

But for us, our time in Asheville, although low-impact, was spent. In a short few days, we had enjoyed the Biltmore, the Grove Park Inn, the downtown district, the Blue Ridge Parkway, and all the folks we met along the way. I could feel Asheville’s natural charm tugging at my soul, urging us to stay, even if just a little while longer. Unfortunately, I had to let her go — this time.

But I know we’ll be back. And who knows? Maybe one day we’ll live there.

All information courtesy exploreasheville.com. Check out this online resource for a complete calendar of events, as well as a custom-made itinerary before you go. Highlighted upcoming events:

Through January 2: Christmas at the Biltmore Estate