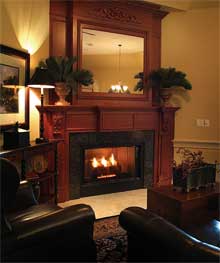 The last thing Sam and Jennifer Brown wanted for their Ocala home was a television set that demanded attention in their family room. Their newly constructed residence is an elegant blend of Mediterranean and European design, making it important to include a media center without it serving as the focal point for the busiest spot in the house.

“The design concept of the television is very subtle and appealing,” says Sam.

Builder Jeff Martelli and Chad Watson of Total Audio Solutions came up with the perfect idea — hide it. Since the kitchen, game, and dining areas are visually open to the family room, the first thing you see is a gorgeous, hand-carved, cherry wood gas fireplace. A stately mirror is framed above the fireplace with adorning crown molding.

So where is the TV? Look a little closer. Still no sign of the big black box? Chad grabs a remote, clicks once, and the TV set appears — behind the glass mirror! The 42-inch Sony High Definition DLP flat screen magically reveals a clear definition for viewing. Even better — it is easily seen from all areas of the large family area.

“The trick in making this work is actually not in the type of TV,” Chad explains, “but in the kind of glass that allows for clear viewing.”

The sound is first class, too, making you feel as though you are sitting front row in a jazz concert or movie theater. Chad credits the superior sound system for successfully integrating the TV with exceptional audio. Seven Electrovoice speakers frame the ceiling in the family room, including two sub woofers giving a superior sound throughout the space.

And the TV and sound system perfectly complement the handsome design of the room, something Jeff is very proud of.

“One of my building hallmarks is hiding a television set from obvious viewing,” says Jeff. “I’ve custom built many entertainment systems with doors to hide the TV, but this new design of discreetly putting the TV over the fireplace has become a popular feature.”

And while one might think it difficult to remove the TV from the fireplace in case of a problem, that notion is quickly dismissed with the simple removal of the frame and four screws. Easy in, easy out, completely eliminating the frustrating maneuvering of wires and DVD and cable boxes. It simply pops out while the adjoining equipment is conveniently stored in a nearby closet.

The Browns are pleased with the finished product, also noting the terrific surround sound system that is included. Sam says the room has evolved into a great gathering area for everyone to hang out.

“Music is very important to us, too,” Sam adds, “and having an integrated TV and CD system sets the mood.”

• Wall mounts can hold a flat screen television set in a corner and close to a wall to minimize it taking up a lot of wall space
• A mirror is a great decoy for hiding a TV
• Incorporate your audio visual needs into the design before building — you’ll save time and money in the long run
• Use speakers that blend onto the surface of the ceiling or wall, preferably recessed which can be painted.