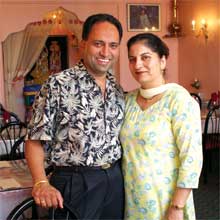 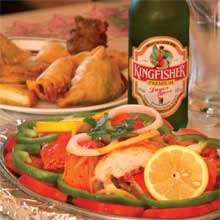 If it’s true that the best things come in small packages, Amrit Palace Indian Restaurant is a perfect example. Behind its simple storefront appearance and busy SR200 address, Amrit Palace offers a delightful escape for anyone seeking genuine Indian cuisine. After dining here, it’s easy to see why this unassuming spot continues to draw repeat customers on a regular basis.

For nearly a decade, owner Satnam Singh has been satisfying the Indian food cravings of guests, many of whom return again and again. Singh arrived in the United States in 1979 and joined forces with his father, who had been in the States since 1972, to open an Indian restaurant in Ft. Lauderdale. The two men later opened a second dining establishment in North Miami Beach in 1984. Singh later moved up to Ocala and found there was no other Indian restaurant in Ocala when he opened his doors in 1996.

Amrit Palace may not be palatial in size, but it is undeniably big on flavor. Tantalizing aromas envelope patrons as soon as they enter the establishment — curry and an evocative combination of other spices make it hard to detect just one. Tables in the main dining room are nestled against the salmon-colored walls topped by decorative beading and casually decorated with Indian prints.

Robyn, my well-traveled friend and fellow companion in many dining adventures, accompanied me on this outing. No novice to Indian dining, in a matter of minutes she helped select a variety of appetizers, breads, and sauces to get us started. Fortunately, Robyn was able to describe many of the dishes before we order, so I had an idea of what to expect.

Indian cuisine is known for its numerous different breads and any of these make for a fine appetizer. Nan, leavened bread baked in a clay oven, is a popular choice, especially when partnered with “Tidbits,” a variety of homemade sauces and chutneys. We had Garlic Nan and I discovered that the mango chutney and also the tamarind chutney both paired well with this bread.

The menu is large and varied, which can present an amiable dilemma to those who can’t make up their minds. Apparently, this happens frequently because there is actually one section on the menu that actually offers four complete dinners instead of individual entrees. At Singh’s suggestion, we decided on the Amrit Palace Indian Dinner for Two.

For those who want to taste a number of things, this dinner is sure to be a wise option. We each had a cup of the flavorful vegetable soup, known in India as mulligatawny. The distinct, but not overwhelming, taste of cilantro accented this rich and delicious soup.

Next, we enjoyed a variety of appetizers that come with the dinner. Among these were Vegetable Samosa (crisp fried patties stuffed with potatoes, peas, and Indian spice), Bhujia (vegetable fritters with onion, green pepper, potatoes and spinach), Aloo Pakora (potatoes with chick pea flour and spices), Cheese Pakora (homemade cheese wrapped in a breading of chick pea flour), Meat Samosa (crisp fried patties stuffed with meat, peas, and spices), Chooza Pakora (pieces of tender chicken marinated in ginger, garlic, and yogurt, and then batter fried), and Papadam, (a delicate, wafer thin “cracker” made of bean flour).

The appetizers offered such an assortment of flavors that it was difficult to designate one as a favorite. Just as with the breads, I found the appetizers were enhanced even more by the different homemade chutneys and sauces. Clearly, one could feast on bread, appetizers, and “tidbits” alone and go away satisfied. (I made a mental note to do just that on my next visit!)

The dinner for two offers a choice of two entrees from Lamb Curry, Chicken Curry, Vegetable Curry, or Chicken Tandoori. It comes served with Nan bread, Pillaw rice, onion chutney, and mango chutney. We settled on the Vegetable Curry and Chicken Tandoori and were quite satisfied with both. Dishes can be prepared to your personal taste, as far as spiciness goes, which means that both the adventurous diner and the more timid can be equally pleased with their orders. Robyn opted for “hot” and the Vegetable Curry was just that, coming across with a powerful punch of spicy flavor, but not unbearably so.

Several dishes at Amrit Palace are prepared in a tandoor, a type of clay oven commonly used in Indian cooking. Chicken Tandoori is a favorite of many customers and is presented on a platter, steaming and sizzling somewhat like an Indian fajita. The platter is piled high with vegetables and ample pieces of chicken that have been marinated in yogurt, garlic, ginger, vinegar, and Indian spices.

Ever eager to try something new, we also sampled an entrée from the seafood section of the menu, Shrimp Masala. In this hearty dish, large shrimp are cooked with fresh tomato sauce, butter and cream, green pepper, and onion. For the best taste combination, the Pillaw Rice serves beautifully as the base for your entrée. Lightly fried with almonds, cashews, green peas, and golden raisins, this rice wins hands-down over plain rice, but the mixture of flavors doesn’t overwhelm the main course.

While I was more than pleased with the entree options in the Amrit Palace Indian Dinner for Two, I couldn’t help but be intrigued by the many entrees offered in the Chicken, Lamb, Vegetable, Biryani Rice, and Seafood sections of the menu. In addition to the numerous dishes made with curry, there are even more that combine other different Indian spices.

Portions are substantial and voracious eater that I am, I still found it hard to imagine that a duo would be able to finish everything in the dinner for two. This presented a slight problem as it includes dessert. The Gulab Jamun is a typical sweet finale to an Indian dinner and consists of sweet fried pastry balls served with honey syrup and rosewater. Other desserts on the menu include Kulfi (homemade Indian-style ice cream with almonds, pistachios, and rosewater), Rasmalai (homemade Indian cheese in a rich cream sauce), and homemade mango ice cream. We enjoyed a dish of the savory mango ice cream and found it to be the perfect frosty ending to hearty dinner. I only wish I had been able to finish every bite, but my enthusiastic attention to the earlier appetizers, bread and our entrees made that impossible.

As we walked out of the restaurant, laden with to-go boxes carrying the dinner we were too pleasantly full to finish, I made a vow to return soon. Next time, I intend to tackle fewer dishes and maybe, just maybe, I will have room to polish off every bit of that savory homemade mango ice cream!