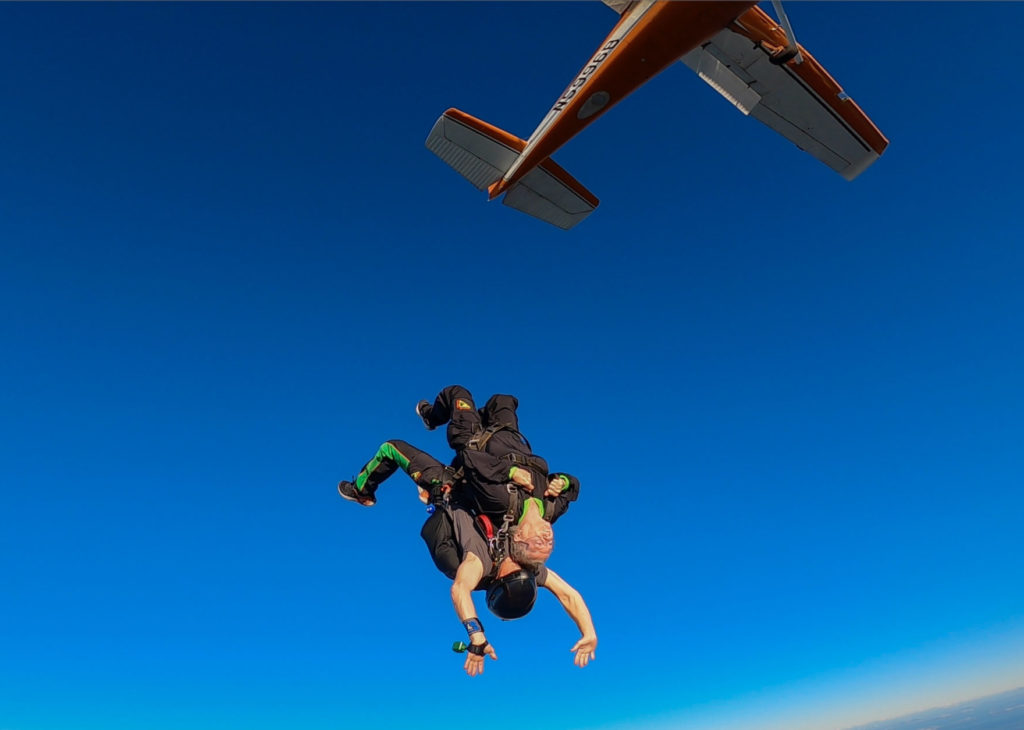 Skydiving is not for the faint of heart!

January 1st was a beautiful day, with wispy clouds and bright sun rays welcoming in the new year and, for many, a fresh start full of resolutions and hopes for better times. I took a few minutes to sit quietly on my back porch, alone with my thoughts. And then I drove to the Marion County Airport near Dunnellon and bailed out of a perfectly good airplane.

Donnie Hickey, the drop zone owner for Central Florida Skydiving, is an experienced dive master with more than 9,000 jumps under his parachute. I was harnessed to Hickey for my tandem skydive.

But before more details, a bit of background.

Hickey has been involved in aviation for years, both as a sport and as a commercial pilot of small aircraft. “I was a pilot. I didn’t even know skydiving was an option,” he recalls of his early career. “But I’ll never forget the first jump. It was everything I wanted it to be; 50 times more. And the feeling to this day is so fresh, the overwhelming feeling of being so successful through what I would consider the maximum—by that I mean there is nothing more you could possibly do to someone that would scare them any more than that.”

His first skydive was a tandem and he remembers watching the video and sharing the excitement with his wife.

“She flew with me in planes, she flew with her parents her whole life, but she said she’d never do it. Aft er she saw the video, she wanted to try,” he shares. “And I said why don’t you do a tandem and I’ll do another tandem. I was secretly wanting to do my second one so I could see if I could ‘get it.’ And I realized instantly that I was seeing more, smelling more, tuning in more. It was beautiful. I realized not only could I do it, I could be really good at it. I told her I wanted to go to school and be a skydiver and she said you’re not doing it without me and we signed up for the advance free fall (AFF) program.”

Hickey says every jump aft er that was different and there was always something he could do to improve.

“Not only do you get better, you learn how to control your body, right down to precision movements. And then you start to realize that when you see someone struggling, you say maybe I can help this person. That’s where it strikes you in your heart—not only can I teach them, I can understand where they are coming from because that was me, I was scared too. I was a commercial pilot climbing on the outside of a plane. I was supposed to be flying it, not jumping out of it.”

“Being in such close relation to another person on a skydive is amazing and the tandem is extremely special,” he shares. “That is usually their first jump and they remember it for the rest of their lives.”

Hickey says part of his motivation for opening the Central Florida Skydiving (CFS) drop zone was to provide a more personal experience between instructors, coaches and students, from first-timers to those working toward a Class A license, which requires a minimum of 25 skydives, and more seasoned participants. He says they often do six to 10 tandem jumps on a weekday and more on weekends, and that one of his secrets to success with first-timers is being able to read their body language.

“I can see when people are licking their lips, blinking a lot, a lot of little indications,” he notes. “It’s funny because if this 21-year-old man comes in here going, ‘Dude, let’s go…’ he’s gonna pass out or puke on me because he’s not breathing right, he’s not relaxed, he’s stiff as a board.” 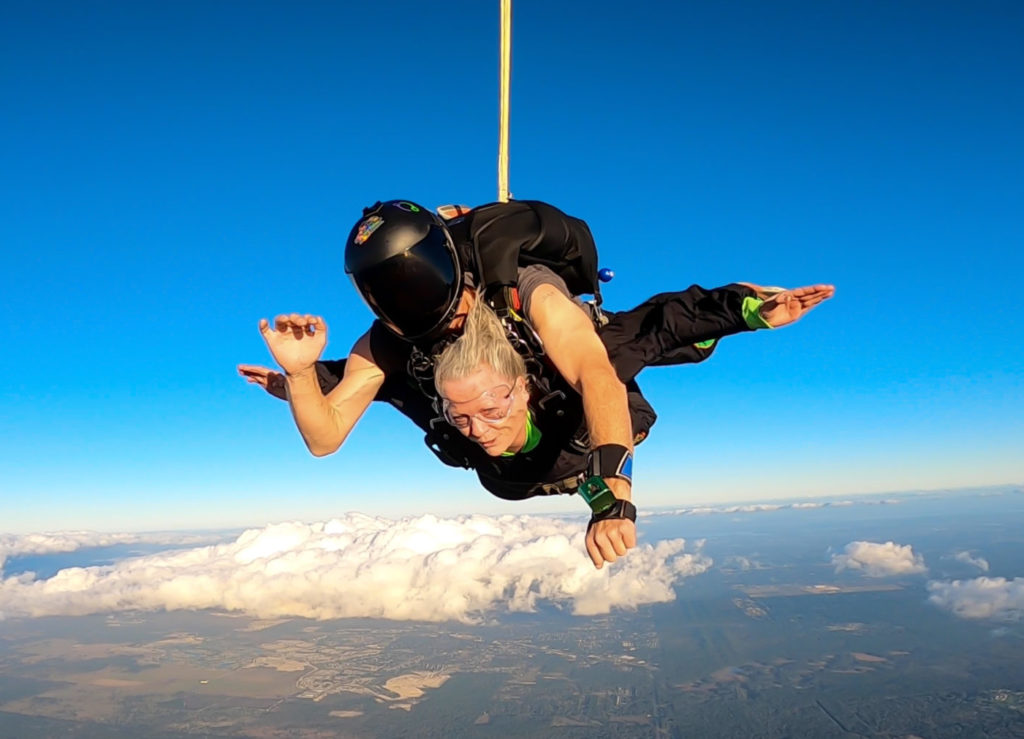 “Students like you,” he tells me, “are going out there paying attention and tuned in. I do a mini profile of a person and read them and see what they need. In this situation, people are terrified and I cater to it because I was that person. And then you step off the plane and land and it’s the best jump yet and then the next one is the best yet. It just gets better and better.”

“We are a USPA drop zone,” Hickey says. “These are the safest people you’ll ever meet. They are constantly checking.”

According to the USPA, approximately one in 600 jumps results in a main parachute malfunction. Over the past five years the number of annual civilian skydiving deaths has decreased, with 10 in the U.S. in 2021, the fewest since recordkeeping began in 1961. The USPA believes the fatality index per 100,000 jumps is at an all-time low due to “the efforts of drop zones and their staff , the parachute manufacturing industry and skydivers across the country.”

Nicole Sanchez, administrative manager for the CFS drop zone, says she got into the sport when she met her boyfriend, Thomas “Doc” Crump, a former Army flight medic with experience in rigging and aerial delivery. Crump is the CFS safety training advisor and master rigger.

“I had a really big problem with social anxiety. I couldn’t go places and engage in conversation with a lot of people without slurring my words; that’s how much anxiety I had,” Sanchez shares. “After my own 14 years in the Army, I kept looking for that sense of purpose again.‘Doc’ started introducing me into the skydiving community. Slowly, I started coming around, blossoming like a flower. I did my second tandem and I knew I wanted to get my A license. It’s like I had a spiritual awakening.”

She made her first solo jump hand in hand out of the plane with Crump. 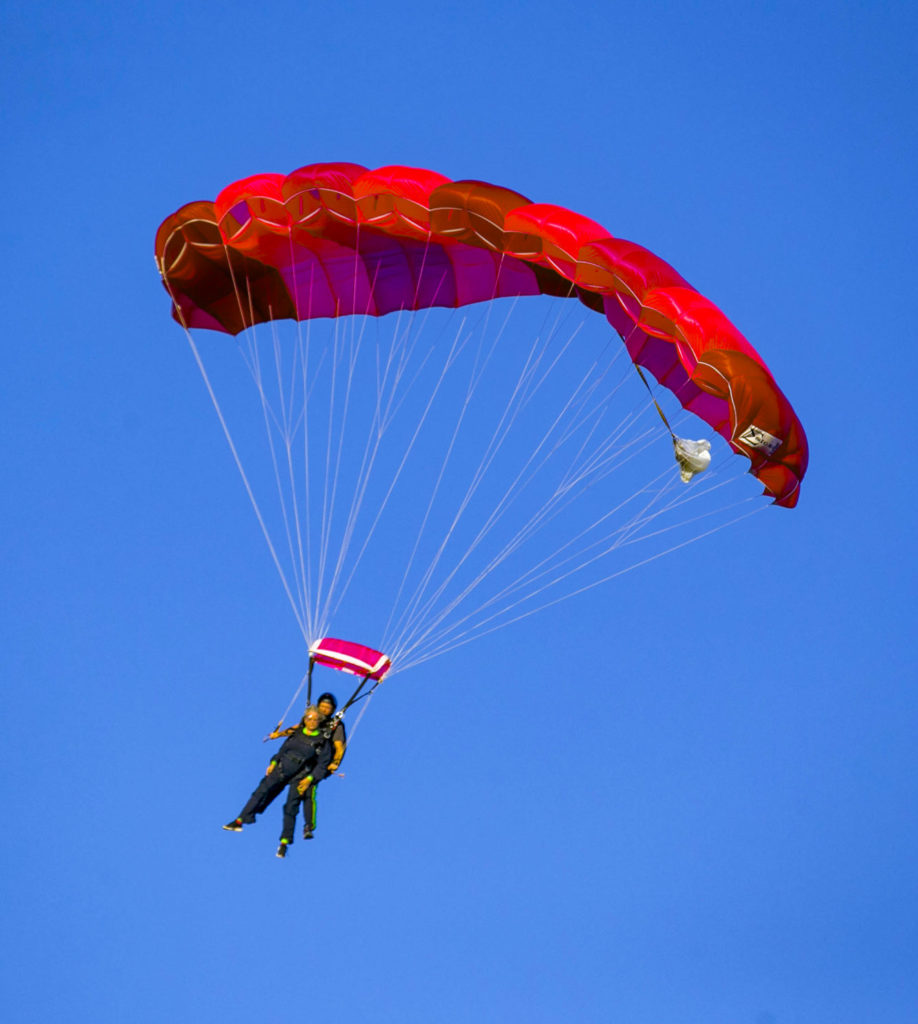 “Don’t let the fear hold you back from experiencing what might be the most beautiful experience in your life,” Sanchez offers. “I did that for a long time and skydiving— you’re either going to have a wonderful experience or the opposite—but you can’t let fear stop you.”

So, I swallowed my fear, kissed my husband Alan Height and walked out to “Nemo,” CFS’s bright orange plane, with Hickey.

Everyone says “jumped out” of a plane, but we did in fact roll out the side door of “Nemo” head over heels.

I have to admit that when the pilot, Tim McLain, and videographer Whitey Meade opened the door and I heard the roar of the engine and felt the blast of wind at 10,000 feet, I nearly panicked. But I did a couple of deep yoga breaths and followed the instructions Hickey had given me on the ground.

Boom! We were accelerating in free fall, at a speed between 120mph and 130mph. You don’t feel that, though, not the speed, just the impact of the wind contorting your face. And they want you to smile at the videographer! Right! I was screaming like a banshee, which is what was captured on my video.

But then, suddenly, the parachute popped open and we were softly swaying. It was so beautiful and peaceful. I could see the horizon, glinting bodies of water below, including the winding Rainbow River, fields and fences and buildings.

All too soon, we were gently circling the airport, coming in for our landing. I snatched up the material on the front of my jumpsuit, raising my legs straight out in front of me, and Hickey touched down and slid to a seated stop, with me in his lap, in front of my husband, Alan Youngblood, Meade and Sanchez.

Writer’s Note: Choosing to skydive is a serious personal decision. My friend Alan Youngblood told me about the Central Florida Skydiving center that opened in Marion County last September. I thought it over for months before I decided to make a tandem skydive on New Year’s Day. Alan was there to capture the adventure. We were not on assignment for Ocala Style,but later offered this article and photos for inclusion in this issue.