Nonagenarian Lorraine Carroll infuses Ocala’s Fort King National Historic Landmark with her love of history, eagerly sharing it with others. 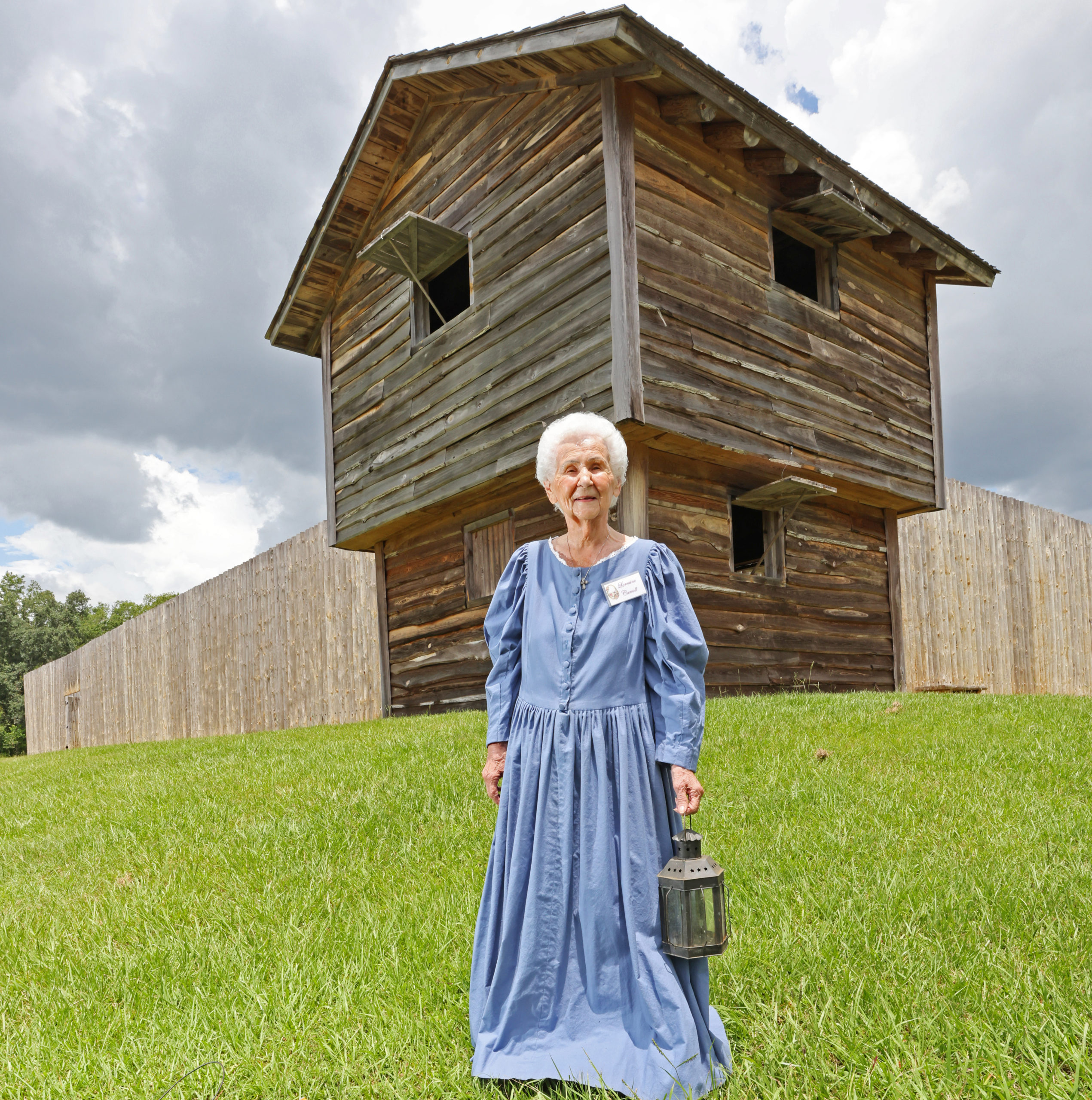 Every Saturday, Lorraine Carroll is up at her usual 6:30am, has a cup of coffee and a light breakfast, gets dressed and then, late mid-morning, makes the 25-minute drive to the Fort King National Historic Landmark (FKNHL).

Wearing her official forest green uniform blouse, accessorized with a large pinned-on Chief Osceola button and complemented by stylish black slacks, Carroll settles into her Visitor Center post. From noon to 3pm, she greets visitors with a charming smile and a twinkle in her eyes, eager to educate them about the landmark, located at 3925 E. Fort King St.

Beyond just handing out brochures, she will slide off her chair mid-sentence to enthusiastically point out some of her favorite artifacts in the building. Oh, by the way, Carroll is 95.

“I’ve always loved history,” says Carroll, whose parents emigrated from Austria to Chicago in 1900. She was the youngest of 12 siblings. “Growing up, I was the only girl in history class, so I had to show up the boys. And I did.”

Married at 20, Carroll and her late husband, Bob, had two sons, Drew and David. When the Carrolls began to think of retirement, they knew they wanted to get out of the Chicago winters.

“We had Chicago friends who had a vacation home in Ocala, so we came to check out the area,” shares Carroll, now a great-grandmother. “We liked Ocala right away, bought a home and moved here 30 years ago. Bob and I were married 55 years. He died in 2002, but I still live in the house we bought.”

Already volunteering at a local hospital, Carroll attended a Mother’s Day luncheon at a local Elk’s Lodge seven years ago. One of the featured speakers was a FKNHL representative, who let those in attendance know of volunteering opportunities at the site.

“I signed up right away,” says Carroll. “I liked volunteering at the hospital, but I couldn’t pass up a chance to volunteer at a historic site. That just seemed like something I was meant to do.”

As it turned out, that decision was a good one for many reasons. The COVID-19 pandemic did not permit hospital volunteers, but Carroll could still volunteer at the historic landmark. 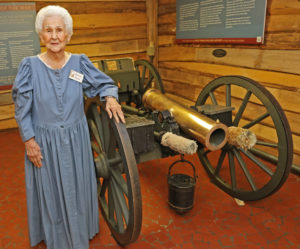 “Now, I just volunteer at Fort King and that has really worked out for me,” says Carroll, smiling. “I just love it here, being surrounded by all this history and getting to meet so many interesting people. We have people visit just not from the Ocala area and around Florida, but even from other countries. My favorite was a family from Scotland.”

When she isn’t volunteering, Carroll loves finding a bargain at garage sales and having lunch with her church group friends. She is an avid reader and, of course, her favorite books to read are history books.

The City of Ocala’s Outdoor/Historical Resource Program Coordinator Kathleen Ramirez, a former teacher now in her first year at the Fort King site, knows the value of volunteers like Carroll.

“Our volunteers play such a big role in what we do here at the site,” she says. “Since I’ve been here, Lorraine has taught me a lot and I learn a lot from watching her interact with visitors. She loves what she does, and she makes it a great experience for our visitors.” 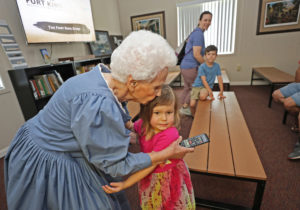 Brad Baker, the Outdoor/Historical Archaeologist, agrees: “Lorraine cares so much about Fort King and she is so welcoming to visitors. We are always looking for more good volunteers.”

During treaty talks between the U.S. government and the Seminoles, Osceola, a Seminole leader and war chief, opposed the forced relocation of his people. As relations between the parties fell apart, the U.S. government banned the sale of guns and ammunition to the Seminoles and Osceola was locked up at Fort King. Osceola signed a peace treaty to secure his release but, in December 1835, he and his followers attacked Fort King. Combined with Seminole Chief Micanopy’s concurrent attack on the forces of Maj. Francis L. Dade, the seven-year Second Seminole War began.

In May 1836, the Army abandoned Fort King and the Seminoles burned it to the ground. A year later, Fort King was rebuilt, and the Army launched an all-out assault on the Seminoles until the war’s end in 1842. The surviving Seminoles relocated to the Florida Everglades and are known today as the Seminole Tribe of Florida.

In 1844, Marion County was created, and Fort King became its first county seat, with its buildings used for offices and a courthouse. In November 1845, the first term of the circuit court was held at Fort King and the site was used as a courthouse until September 1846.

The last remaining original buildings of Fort King burned down in the 1920s. After several archaeological surveys were conducted in the next three decades, the county acquired key parcels of the site. On February 24th, 2004, Secretary of the Interior Gale Norton designated Fort King as a National Historic Landmark. Ten years later, the Fort King National Historic Landmark opened to the public, and the reconstructed fort opened in the fall of 2017. 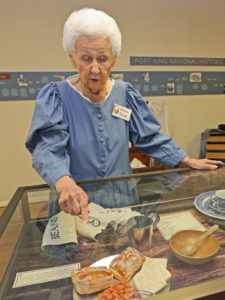 Today, the 42-acre landmark includes that exact replica of Fort King, which is open to the public for self-guided tours. Visitors can also tour the site via a .7-mile walking trail, featuring the Daughters of the American Revolution soldier’s cemetery, the David Laffey Heritage Garden and Seep Spring. The Visitor Center and Archaeology Resource Center displays focus on the history of the Seminole Wars and include artifacts found at the site. Throughout the property, signage guides visitors through the history of Fort King. There also are events and programs throughout the year, which are open to the public. The park and the trail are open daily, from sunrise to sunset, free of charge.

“Our biggest event is the annual reenactment in December. This year the two-day festival is December 3rd-4th. It has historic-themed crafts, games, workshops, activities, living historians and vendors. We will be breaking ground soon on a blacksmith shop,” notes Ramirez. “The highlight is the reenactment of the event that began the Second Seminole War. From the actors and costumes, everything is so authentic, it’s like stepping back in time.”

And, no surprise, Carroll dresses up in authentic 1800s garb for such events.

“What surprises me of the dress that I wear is it’s a heavy double material. And all the U.S. Army uniforms are made of heavy wool material, not suitable for Florida’s climate at all,” offers Carroll, who adds with a chuckle, “It’s probably a good thing that we have the reenactment in December when it’s not so hot. But even if it was summer, we’d do it anyhow because we love history.” OS

Classrooms in the Garden

The classes are offered from 10am to noon and the fee is $15 per person. Register at Class/Register@ocalafl.org/recpark