It’s that time of year again. You’re seeing a lot more men and women wearing riding boots and breeches at the grocery store, and there are plenty of out-of-state trucks and horse trailers in the parking lots of area restaurants and equine businesses.  HITS is back in town.

This year marks the 32nd anniversary of the HITS Ocala Winter Circuit, which has an estimated $50 million economic impact on Ocala and the surrounding area. Short for “Horse Shows in the Sun,” HITS, Inc. is the largest horse show operator in America. Since holding its first horse show circuit in Gainesville in 1982, HITS has grown dramatically. No other hunter/jumper circuit on the East Coast features such a wide-ranging opportunity all the way from young “short stirrup” riders on up to the sport’s most elite competitors.

Raiders from across the United States, Canada, Mexico and Europe travel to Ocala to compete. A wide array of classes is offered for all levels of riders, including everyone from elementary school-age beginners to Olympic-level riders. HITS president and CEO Thomas G. Struzzieri says, “We bring thousands of competitors together at all levels and give them a chance to compete for money, fun and success.”

It was Struzzieri’s goal to offer more competition opportunities for the majority of contestants—not just the small percentage at the highest levels. His idea became a resounding success. Today, HITS produces major shows in Florida, Arizona, California, New York and Virginia—more horse shows than any other event company. Struzzieri was recently honored for all he’s accomplished with HITS when the University of Louisville Equine Industry Program presented him with the John W. Galbreath Entrepreneurship Award for 2012. 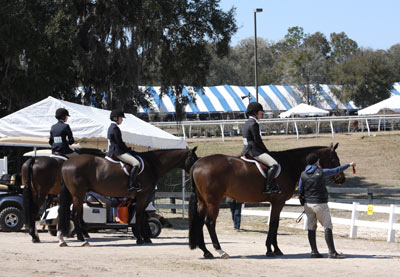 Since 2002, HITS has been held at the Post Time Farm show grounds on U.S. Highway 27, just 15 minutes outside of Ocala. The Post Time facility covers 300 acres and has 26 permanent barns. Horses are generally stabled at the farm as early as November, and some stay through April, although the heaviest concentration of horses is found during the HITS competition. At any given time, there will be close to 2,000 horses on the grounds. With that many horses, 10 show rings and more than 250 classes scheduled per week, there is always a  flurry of activity.

“HITS is on par with any professional sport. It’s the start of the season for show jumping,” notes Kristen Vale, HITS office manager, who is based in their Saugerties, New York office. “Our championships, like the Super Bowl or World Series, happen in the fall, so this is more like the regular season, and we have classes for all levels of competitors.”

“We have riders and horses that have been to the Olympics and competed internationally. Spectators can see someone riding at their very first show, while in the other ring, there may be a two-time Olympic gold medalist. No other sport offers this. The HITS mantra is, ‘something for everyone.’”

Another exclusive to horse shows is the fact that men and women are not separated by classes.

“Horse sports are the only sports where men and women compete on an equal level,” Vale points out. “In car racing, for example, they make a big deal about a woman competing, but that’s not the case in horse sports. There’s no real advantage to being male or female. It’s not about age or size; it’s about how you ride.”

A good number of HITS contestants are school-age junior riders. Since HITS takes place during the school year, there is an on-site school so students don’t fall behind in their studies. Youth riders bring assignments from their home schools, in whatever city and state that may be, and attend the HITS on-site school during the week. During these concentrated sessions, they are assisted by teachers who are local and often retired from teaching. All subjects and grade levels are covered, even labs, AP courses and foreign languages.

If you’ve never ventured out to the HITS show grounds, make this the year you pay a visit.

“You can go in the morning or just for the afternoon. It doesn’t have to be an all-day thing,” says Crystal Fernung, chairperson of the Equine Ag Committee of Ocala/Marion County Chamber & Economic Partnership (CEP). “Most people don’t know there are a lot of vendors at HITS. You can even have lunch there.”

Fernung adds that spectators can go and enjoy HITS just for the sheer beauty of watching the horses and riders compete. 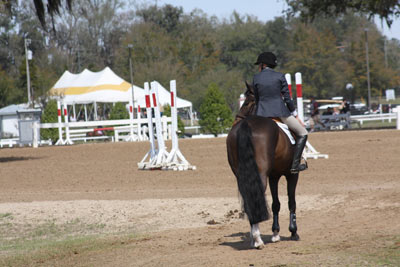 A quick glance at the HITS schedule reveals there are three disciplines: equitation, hunter and jumper. Here’s a quick rundown so you’ll better understand what you’re watching.

Equitation classes are divided by rider age and skill and may be judged over fences or “on the flat” where no jumping is involved. Judging is subjective. Riders wear formal hunt coats, which are not flashy or brightly colored. In equitation classes, the rider is judged, not the horse. Of course, if the horse makes a huge mistake, it’s likely a result of rider error, so the judges want to see a good rider position and control, which should translate to a quiet, smooth-moving, responsive horse with nice form.

Hunter classes are divided either by the rider’s age and skill or by the horse’s level of training and/or skill. In these classes, the judging focuses on the horse, not the rider. Horses are judged on maintaining a consistent pace and classic jumping style with its knees tucked up tight and body in good form. Fence height starts at 2 feet and goes up to 4 feet, depending on the class.

“Hunter classes are judged subjectively on the style of the horse, on how pretty and smoothly the horse performs,” explains Vale. “It’s a lot like figure skating that way. The jumps aren’t fancy because they’re meant to resemble the natural fences a rider would encounter out in the field fox hunting.” 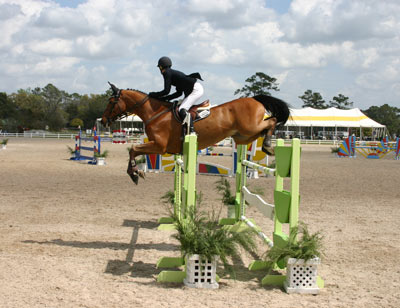 Jumper classes tend to be crowd favorites because of the speed and challenge involved. Show jumping became an Olympic sport in 1912, but top-level competitions didn’t come to the United States until 1965. Think of show jumping as a cross between horse racing and downhill skiing. It’s more about function than form; the most important thing is that a horse jumps “clean” and in the allotted amount of time.

With jumpers, “pretty is as pretty does.” Judges will give the horse penalties or “faults” if it refuses a jump, knocks down a rail, falls or exceeds the time limit. A rider is disqualified if he or she falls off. The goal is to finish the course of approximately 16 jumps without penalties while not exceeding the time allowed. When several riders complete the course without faults, there will be a timed “jump off” to determine the winner.

“In jumper classes, it’s a little easier to follow the scoring because it’s objective,” notes Vale. “The winner is the horse that doesn’t knock anything down and goes the fastest.”

Unlike the hunter classes, fences in the jumper ring are colorful and dramatic. There are different levels and fence heights (starting at about 2 feet), and competitors include everyone from amateur riders to professionals. In Grand Prix jumping competition (the highest level of the sport), fences are up to 5’3” tall and as much as 6 feet wide.

Riders competing in the lower levels of jumping can wear more casual attire, but at the Grand Prix level, they wear formal hunt coats.

If you can attend only once, make it a Sunday afternoon and catch one of the big Grand Prix jumping classes, which start at 1pm each Sunday. You may just get hooked on horse shows!