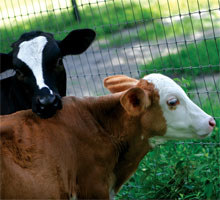 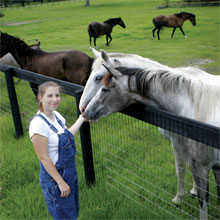 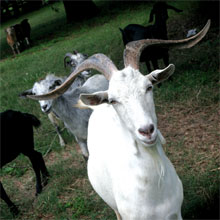 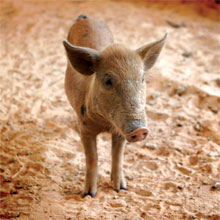 Mario was on the run. Of course, he wasn’t known as “Mario” at the time. He was just a clever black-and-white male pig who mysteriously appeared one day in an upscale Tampa neighborhood. His natural rooting tendencies were not exactly welcomed by the suburbanites who preferred that their meticulously landscaped yards remain pig-free.

For two weeks, Mario (named after Mario Andretti, thanks to his impressive speed), led all who tried to catch him on a merry chase. Finally, a trapper successfully captured the elusive porcine.

An animal rights group, Florida Voices for Animals, stepped in and contacted the trapper, who after many calls from concerned citizens, agreed to turn Mario and another recently trapped pig over to the organization. Searching for a permanent home for Mario and his new friend, Florida Voices for Animals contacted Kindred Spirits Sanctuary, and escorted them to Ocala where they are now living a pig’s dream — plenty of room to roam and always a mud hole to wallow in.

The story of Mario raises serious questions. When a dog or cat is neglected, abused, or unwanted, there are usually multiple organizations capable of providing help. For farm animals like Mario (or “food animals,” as they are typically called), there are far fewer options for a happy ending.

“Shelters often have their hands tied,” says Laura Brahim, executive director of Kindred Spirits Sanctuary, which was formed in 2003. “Farm animals are the most exploited group and we want people to realize that these animals should be protected just as dogs and cats are now.

“Our mission is to provide a loving environment for abused, neglected, displaced, and abandoned farm animals,” adds Laura, “and to provide a place where people can interact with them.”

This summer, Kindred Spirits moved into a permanent facility on U.S. Hwy. 27 north of Ocala. The 36-acre site, located in the heart of horse farm country, offers a lush, secure setting for the approximately 100 animals that presently call it home. There are numerous pastures and six barns constructed specifically for the various farm animals: pigs, cattle, horses, burros, goats, rabbits, and even turkeys.

Animals live in groups according to species and compatibility. There have been cases where animals rescued by Kindred Spirits were pregnant and later gave birth at their new home, but other than these situations animals are not bred or used for reproduction. All male animals are neutered.

Kindred Spirits works with several area veterinarians and Laura notes that they are indebted to the professionalism and kindness of Dr. Freel of Country Oaks Animal Hospital, Dr. Barrett and Dr. Kohan at Camelot Animal Hospital, and mobile equine vet Dr. Atteberry.

Kindred Spirits has taken in a number of animals that were rescued from dire abuse situations in New York and Maine. Kindred Spirits also assists in neglect and cruelty cases uncovered by law enforcement agencies.

“Statewide, there are many small groups that take in one particular type of animal,” notes Laura, “but we’ve found there is a shortage of places that take in farm animals.”

Laura and her husband, Joel, handle nearly all of the duties of running the farm and caring for the animals. Volunteers help with some of the chores.

Neither Laura nor Joel draws a salary from Kindred Spirits. All of the donations go directly to the animals’ care to cover feed, veterinary expenses, and rehabilitating newly rescued animals. Joel is currently studying to become a veterinarian, which will eventually be a practical benefit for the sanctuary.

Interestingly, although both have been lifelong animal lovers, it was a passion for theater that brought Joel and Laura together. The couple met while working on a production at Ocala Civic Theater and both recently performed in the musical CATS.

Education and exposure are a main focus at Kindred Spirits. In addition to providing for the animals in its care, the sanctuary’s goal is to make a difference in the way people view and relate to food animals, since many farm animals fall into that category.

On large commercial farms, economics and practicality drive the decisions about the welfare of the animals raised, with the main consideration being whether an animal is a profit or a liability. Most farmers who make a living with animals are not intentionally cruel or uncaring. There are sad exceptions, of course, but the majority never set out to abuse or neglect the animals in their care.

Unfortunately on large industrialized operations, often referred to as “factory farms,” animals are seen as commodities, and the most efficient, most inexpensive methods are used for production. These methods do not take into consideration the physical, mental, and emotional stress the animals endure. Animals are simply numbers, not individuals.

There are still some small farms and ranches that provide animals, even those being raised for meat or production, with a humane life. For chickens and turkeys, this means being able to scratch in the dirt and range in an enclosed area instead of being confined to a tiny wire cage. For pigs, this means not living on concrete in small pens, but being able to forage outdoors and roll in mud holes to cool themselves. For sheep and cattle, this means not being injected with antibiotics or hormones and being able to graze in open pastures.

“So many people don’t have any opportunity to be around farm animals,” Laura points out. “We give tours by appointment to school children and other groups. We always like to have people come out and meet the animals.”

Kindred Spirits has rehabilitated and successfully placed a number of animals into permanent homes. But the Brahims are realistic about just how many people can take in a farm animal for a companion. Adoptions are definitely encouraged whenever appropriate, but sponsorships are more realistic options for supporters who want to help but can’t actually take on the day-to-day responsibility of an animal.

Sponsorship, which is available by visiting the website, enables animal lovers to support Kindred Spirits Sanctuary through donations for a specific animal. This makes it possible to have your very own cow, goat, or pig without any of the work involved in caring for them. It’s a win-win situation all around, say the Brahims.

Kindred Spirits Sanctuary is supported wholly by fundraising events and the financial donations of animal-loving supporters. Tours are available by appointment for individuals, groups, or school children.

“When people come to visit, they realize these are emotional, sensitive, and responsive animals with distinct personalities,” Laura says. “They start to see them as individuals.”

Tours are available for individuals, groups, or school children. Please call to arrange a visit and get directions to the sanctuary. A 501(c)-3 nonprofit organization, Kindred Spirits Sanctuary is supported entirely by tax-deductible donations.