Backyard chickens are becoming a thing in Ocala’s city limits. 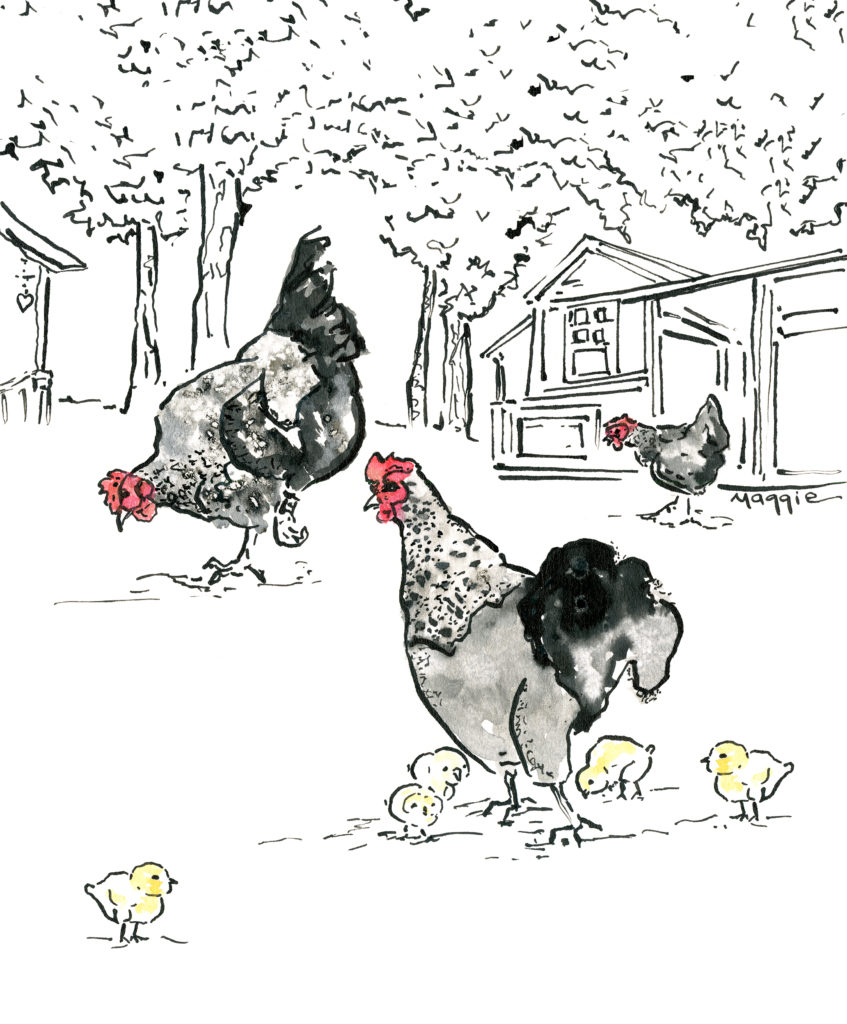 Why did the chicken cross the road in a downtown Ocala residential neighborhood?

So it could climb into its covered, properly ventilated, clean and maintained, predator-resistant chicken house that was designed to be easily accessed while providing at least two square feet of living space per chicken.

That’s right, through a new ordinance, the City of Ocala now allows residents to raise a maximum of six chickens per detached single-family residence within the city limits. And the aforementioned coop is all you need to get started.

“We love our chickens,” says Fort King District resident Amanda Scacchi. “We have six and every one is a different breed. All are laying hens, and none of them are for meat…only eggs.”

Scacchi says her hens lay, on average, five eggs per day, which comes to approximately 12 dozen per month. What her family of four doesn’t eat, she gives to neighbors and friends.

“The ordinance doesn’t allow us to sell the eggs, so we give them away,” she explains.

However, Scacchi’s chickens provide much more than just eggs.

“The chickens are very much our pets,” she says. “My two children love them, and each chicken has a name. They play with them just like they would with any other animal. Most people don’t realize that chickens make great pets. They’re quiet, super low maintenance, they eat bugs and are very friendly.”

Scacchi says her chickens were hand-raised from chicks and can be picked up, carried and petted by her children. The family cleans the droppings from the coop area once each week and occasionally lets the chickens out of their fenced backyard so they can range freely in the front yard. Each night the animals willingly go back into the coop, where they’re locked in to keep them safe from predators. Each morning Scacchi lets them out into the fenced backyard while she collects the eggs.

According to the wording of the ordinance, animals can be kept for meat or for egg production, but the animals cannot be processed on the premises. It isn’t specified, but is implied, that if the animals were raised for meat, then they would have to be processed at a properly licensed facility or by the owner somewhere outside the city limits.

“There are hundreds of people in Ocala who are raising chickens at their homes,” Scacchi asserts. “Within two blocks of my home there are at least six houses where I pass by and see chickens in the yard. Hardly anyone knew it was illegal to have them before the ordinance passed, and now many still don’t know that they can go down and apply for a permit to raise them legally. The process is simple and it’s free.”

Ocala is part of a nationwide trend of chicken-friendly cities. It’s an offshoot of the general self-sufficiency movement, in which people want to ensure that their food is raised in a wholesome manner without antibiotics, medicines or other additives. So what exactly does it take to raise chickens in an urban setting?

“Chickens are inexpensive to raise. You have to build a proper coop and keep it clean,” Scacchi says. “The cost of building the coop is the main expense. I feed my chickens organic feed, but I would estimate that you could raise six chickens for less than $10 per month. When you consider how many eggs you get from laying hens, it’s very cost-effective to raise them.”

The Ocala ordinance states that permitted properties will be inspected by code enforcement two times per year. Hens (female chickens) are acceptable, but homeowners cannot raise roosters (male chickens) ducks, geese, turkey, peafowl, pigeons or any other poultry or fowl. The requirements also dictate the chickens be kept in a fenced enclosure, and the coop and fenced run must be at least three feet from neighbors’ property lines. The area must be cleaned regularly and kept free of insects and rodents. No odors should be perceptible at the property boundaries, and the animals cannot create a nuisance in any way.

According to city officials, only two residents have applied for permits to raise chickens within the city limits thus far.

“Honestly, if this ordinance hadn’t passed, we would have moved,” says Scacchi. “It was that important to us. I wanted my children to experience raising different types of animals and learning all about animal husbandry. We had talked about it for a long time, and now, thanks to the city council, it’s possible for us raise them legally.”