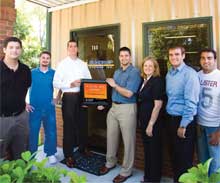 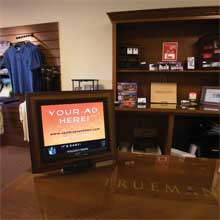 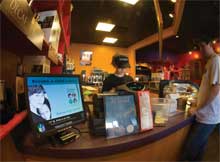 Ben Franklin is credited with saying “Genius is 1% inspiration, and 99% perspiration.” Sundrop System’s first inspiration came last December while its founder, Travis Priest, was renting a ditch digger at the Grand Rental Station in Eustis. While completing the rental agreement, the clerk asked for Travis’s driver’s license: with one deft swipe, the clerk was able to pre-fill the rental agreement with Travis’s name, address, and date of birth, which are encoded on the back of most Florida driver’s licenses.

That simple act, so fast and convenient, started a flood of thoughts. Travis is an experienced high-tech entrepreneur, having co-founded a software company in 1996 aimed at providing low-cost Internet access for children in our nation’s schools while keeping them from the seedier sides of the Internet. Three years later, Symantec, the makers of Norton AntiVirus and other popular software, acquired Travis’s company, creating a more than 18,000% return for his investors.

“In thinking about that transaction at Grand Rental Station, I realized that most transactions between retailers and their customers are actually anonymous,” says Travis. “Retailers often have no idea who their customers really are, and it’s cumbersome for them to find out.”

By the end of January, Travis had enlisted the help of two friends, Jon Wanberg and Mark Coffman, and secured office space in the Mount Dora Commerce Park. They spent February organizing the business and continuing development of the data collection system. In late February, Travis and one of his partners, Jon, made an exploratory sales call to a friend’s business. That visit spawned their second inspiration.

“This business had a digital picture frame at the checkout counter, “ says Jon, “and the owner told us he was charging local businesses a small monthly fee  to display a digitized copy of their business card on it.” Eureka! Within an hour of that meeting, Travis, Jon, and Mark joined the two ideas and the Community Marketing Network was born.

That’s when the perspiration really started. Working furiously, the three partners developed the technology and a business model over the next four weeks and found six local businesses willing to try it out. Sundrop Systems installs a 17’’ flat panel display at the checkout counters and in waiting areas of local businesses willing to host the display. These indoor digital billboards are remotely controlled via the Internet, and a series of 8 ads are fed to the display in a two minute rotation: each ad is on the screen for 15 seconds. There’s no cost to the hosting retailer for the equipment, and in addition, the hosting retailer gets to pick another display in the network in which to display an ad for their store. It’s free advertising for the hosting retailer— no strings attached.

“The advertising service we’re able to offer is highly targeted,” Travis explains. “Retailers can now advertise their products and services directly to the customers of another business that is complementary to their own or has a similar customer profile. You don’t have to put your message in front of 50,000 or 100,000 people in the hopes of finding the few looking for your service: if you’re a flower shop, you can now tell customers of a Tuxedo shop that you sell corsages in colors matching their dates’ dresses.”

Retailers can also target locations in close proximity to theirs, taking advantage of natural consumer shopping traffic. For example, a coffee shop can let the customers of a hair salon know that a light lunch is available after their appointment just a block away.

“The business model is what makes it all work,” exclaims Jon. “We can install the technology at no cost to the hosting retailer and give them a free ad somewhere else at no cost because there is a rotation of 8 ads on the system. We sell the remaining ad slots on the system to other businesses that would like to target our hosts’ customers with related, non-competitive products and services.” It really is a local community of retailers marketing to each other’s customers on a digital network: the Community Marketing Network.

The concept of businesses cross-marketing in each others’ shops is not new. Many retailers already have stacks of business cards and flyers on their counters from other businesses. But this new system has many advantages: card supplies don’t run out without notice, it requires minimal space but can be seen from a distance, the locations are pre-arranged on a larger-scale than individual retailers can negotiate on their own, and the digital displays attract attention by being politely visually intrusive without being annoying to the viewer. As an added bonus, consumers that feel secure in sharing their name and address with an advertiser can do so immediately, which is just not possible with a business card or poster.

But what about the driver’s license swipe? Every indoor digital billboard installed by Sundrop has a magnetic stripe reader attached. If a viewer sees an advertisement on the screen that is of interest, the viewer has the option to swipe their license on the system, submitting their name and address securely to the advertiser through Sundrop’s secure data center. The advertiser can then follow-up directly to that consumer via the postal service.

“Is that safe?” is the first question consumers ask about the system. “Absolutely,” Travis affirms. Here are the facts. The magnetic stripe on the back of your Florida driver’s license contains the following information: 1) Your full name, 2) Your street address, including city, state, and zip code, 3) your date of birth, 4) the expiration date of your license, 5) your height, weight, driving restrictions, and finally, 6) your driver’s license number.

Neither your social security number nor any other sensitive information is encoded on the back of your license. Travis explains, “From an identity-theft perspective, the important piece of information is your driver’s license number. When we read a license, we discard everything but your name, address, and date of birth. We use a well-known mathematical technique called a ‘one-way hash’ to create a unique identifier based on the license number so that we can identify a consumer if their address changes, and neither we nor anyone else can reverse the hash back to the original license number. It’s ‘digitally shredded’ forever before it’s ever stored.”

So, what happens to the data if a consumer chooses to swipe?

“The data is transmitted from that digital billboard over an encrypted link to our secure data center,” Mark explains, “and there it is given to only two people: the retailer who hosts the display, because that is their in-store customer, and to the advertiser to which the customer responded, because that customer expressed an interest in that advertiser.” Sundrop does not sell a consumer’s data to third parties. Travis explains that “We’re consumers, too, and we don’t appreciate untargeted marketing efforts based on the usage of personal data for which it was not intended when it was freely given.”

It’s unusual to find a high-tech company like Travis’s in Lake County, but Sundrop has found early wide-spread acceptance from local merchants. “It’s a great idea,” says Jim Shia, owner of the Health Basket, which was one of the first sites to host a digital display. “Travis had better tell me when he’s taking the company public!” Since mid-April, Sundrop has contracted to install over 80 displays in the area and expects to have over 200 between Mount Dora and The Villages by the end of August.

High technology is a fast business. Travis already has the next three product enhancements on the drawing board, with the first scheduled for release in mid-September. “We’re taking what I believe is the next logical step in interactivity and launching 10 test systems the week of September 12, but I’m not going to spill all the beans right now,” Travis says. “We need to make sure our intellectual property is completely protected, and now that we have these units in the field, creative new ideas are flowing almost on a daily basis. We’re filing related patent applications as fast as we can.”

Businesses can join the Community Marketing Network in one of two ways: at no cost by hosting a digital billboard in their establishment, or at low cost by purchasing advertising space on displays in the network. The free-hosting business model made possible by cooperating community businesses keeps overhead low, which makes purchasing advertising in the Community Marketing Network affordable for even the smallest business.

To join the Community Marketing Network, call Sundrop Systems at 352-729-3124 or visit them online at www.sundropsystems.com. Consumers, you can view ads and respond to advertisers by swiping your license with the confidence that the CMN is safe, private, and secure.