The HOPS’ Spring Heritage Tour welcomes guests into some of Ocala’s most beautiful historic homes. 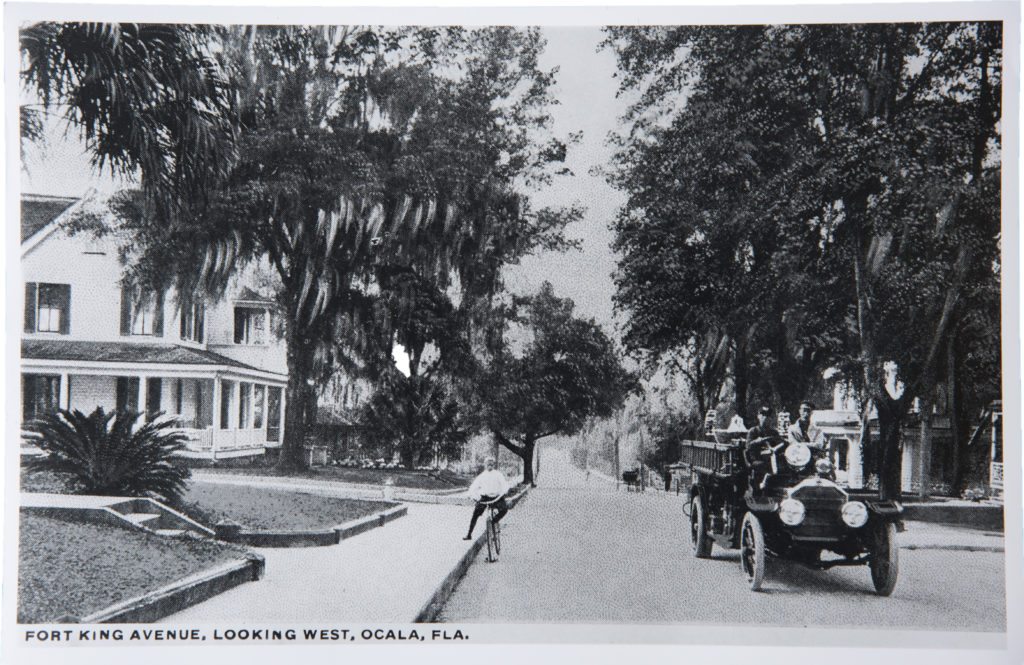 Ever visit a historic site and think, “if only these walls could talk,” or peruse an antiques shop pondering the intriguing stories of earlier lives connected with an especially interesting piece?

If so, you’re exactly the type of person who will appreciate the upcoming Historic Ocala Preservation Society’s (HOPS) Spring Heritage Tour. Of course, you don’t have to be a history buff to enjoy touring the remarkable homes included in this year’s tour. You may just want to learn more about Ocala’s picturesque historic district or be looking for a bit of interior decorating inspiration more up-close-and-personal than you find on your favorite HGTV shows.

You’ll discover that and more on Saturday, March 3, 2018, at the five welcoming locations that are part of the tour, which takes place from 10am to 4pm. Best of all, you can tour the homes at your own pace and in whatever order strikes your fancy.

Tickets can be purchased ahead of time (see info box), or you can buy a ticket on the day of the tour at any of the tour locations. Group rates are available for groups of 10 or more when paid in advance.

A Bit of HOPS History

Since its founding in 1980, HOPS, a non-profit volunteer organization, has been dedicated to the heritage education of the Ocala community and the preservation of historic structures and sites in the Ocala Historic Districts. The projects and programs that HOPS has contributed to are too numerous to mention individually but include such efforts as the downtown gazebo, restoring the Snowden House, contributing to the refurbishment of the First Presbyterian Church steeple and the Fort King Reconstruction project, to mention only a few.

Such projects are funded primarily by tour proceeds and donations from citizens and businesses.

“HOPS is responsible for so much of the preservation of the historic buildings and homes in Ocala and putting different buildings on the National Historic Register,” explains Pamela Stafford, past president of HOPS, board member and chairman of the Spring Heritage Tour.

Although member dues have always helped with HOPS’ projects, for a number of years, the organization held a formal ball as its main fundraiser. When that kind of formal event became passé, the board came up with the idea of offering tours of the very kind of homes HOPS is all about preserving.

The tours have been hugely popular and ticket purchases are considered tax-deductible donations that benefit various HOPS’ projects.

“We have not done a spring tour in several years. We do one fundraiser every year, and for the past several years, we’ve done a Christmas tour, which takes place at night, and we realized people probably would like to see the homes during the day,” observes Stafford.

“We really encourage people to support the home tour; it’s our only fundraiser, and the money goes right back into preservation and education,” she says. “We also do walking tours and school tours throughout the year. For example, a teacher might be teaching Florida history and call to arrange a tour for her class. You can call the HOPS’ office or visit the website if you’re interested in a tour.”

Stafford encourages anyone interested in supporting the historic aspects of our community to consider becoming a member of HOPS.

“Dues are very reasonable, and you’ll be supporting the continuing preservation efforts of HOPS, but you don’t have to put in any sweat equity unless you want to,” she adds with a smile.

Stoothoff points out that although past tours have included some of these other districts, all of the participating homes in the Spring Heritage Tour are in the Ocala Historic District or immediately adjacent to it.

“The age of a home is not a specific requirement to be included on the tour, but most houses in the historic districts were built between 1880 to 1930. To be considered ‘historic’ a building must be at least 50 years old,” he adds.

“Every year the tour improves, and the spring tour is an event you don’t want to miss,” says Stoothoff. “This particular tour includes some newer homeowners as well as those who have been here for many years.”

Locations included in the tour are in fairly close proximity, so you conceivably could walk from home to home, but it’s also an easy drive between them. Either way, wear comfortable shoes (high-heeled shoes aren’t permitted in order to protect floors), and allow a couple hours so you can take your time and enjoy the ambiance of each location.

The tour is self-guided, so you can proceed at your own pace and will be asked to present your ticket at each location. A host or hostess will greet you at each of the stops, mark your ticket and offer information about the home and property. Refreshments will be offered at one of the homes on the tour and is included in the ticket price.

To respect the homeowners’ privacy, photos are not allowed inside the homes, but you are welcome to take photos outside if you like.

Be aware that smoking, pets or outside food or beverages are not allowed inside any of the locations. Homes are generally not accessible to wheelchairs or strollers. If children accompany you on the tour, young children must be carried or hold hands with an adult.

The tour is held rain or shine, so depending on the weather, you may need to bring your umbrella or raincoat. 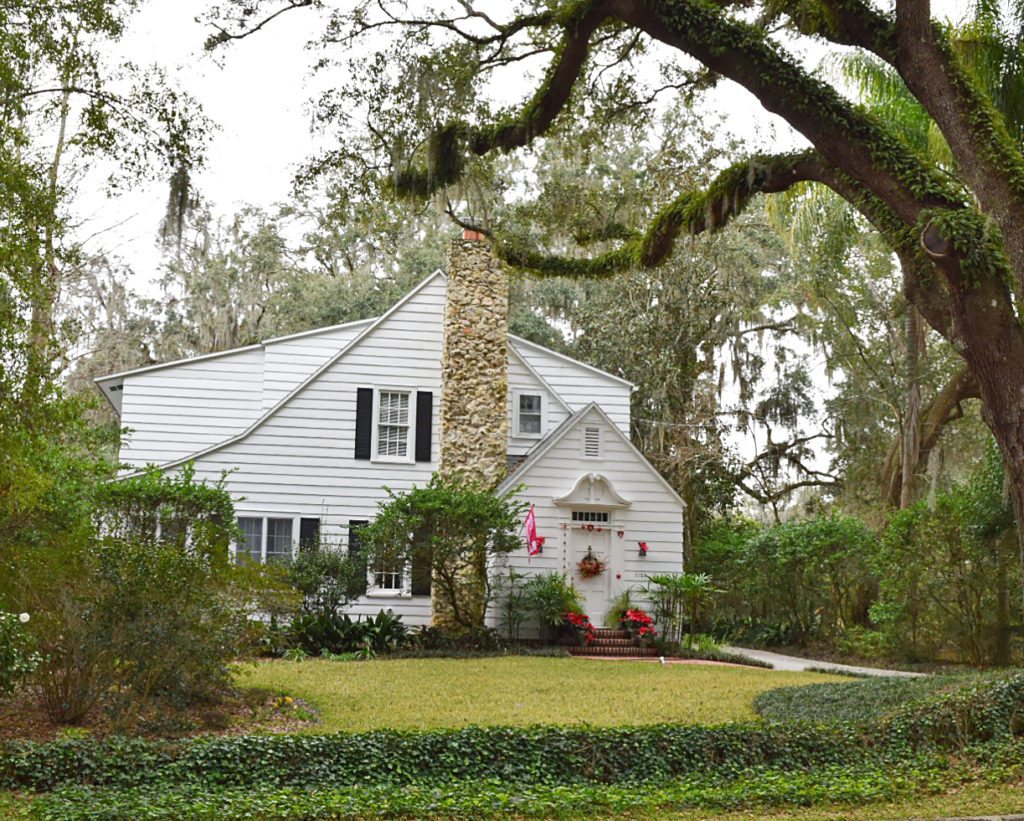 Built in 1926 for John and Coretta Camp Bowman, this lovely two-story home features the Colonial Revival style of architecture with a New England influence. Marion County limerock was used to build the home’s foundation, as well as the chimney. Mr. Bowman was the administrator for Munroe Memorial Hospital, which is now known as MRMC.

This is the second time the Bowman House has been included on the tour, although it’s been at least a decade since the last time. The home is filled with antiques, some of which have been handed down through the family for generations. Many of those pieces have interesting stories attached to them, not the least of which is a pre-Civil-War era half-tester bed, which Jefferson Davis, former senator and President of the Confederate States, once slept in when the bed was on a plantation in Vicksburg, Mississippi.

“The bed was a wedding gift to my husband’s grandparents, Mary Ida Roche and Daniel A. James,” says homeowner Elizabeth Wray.

“When Sherman attempted to take Vicksburg, they used the James’ family home as a headquarters,” says Wray. “When the river was flooding, Sherman and Grant set fire to the house as they were leaving. The family managed to save a few pieces of furniture, including the half tester bed and dining room table. A lot was lost, but some of the portraits and a few other pieces were saved, and some of those pieces are in our home here.” 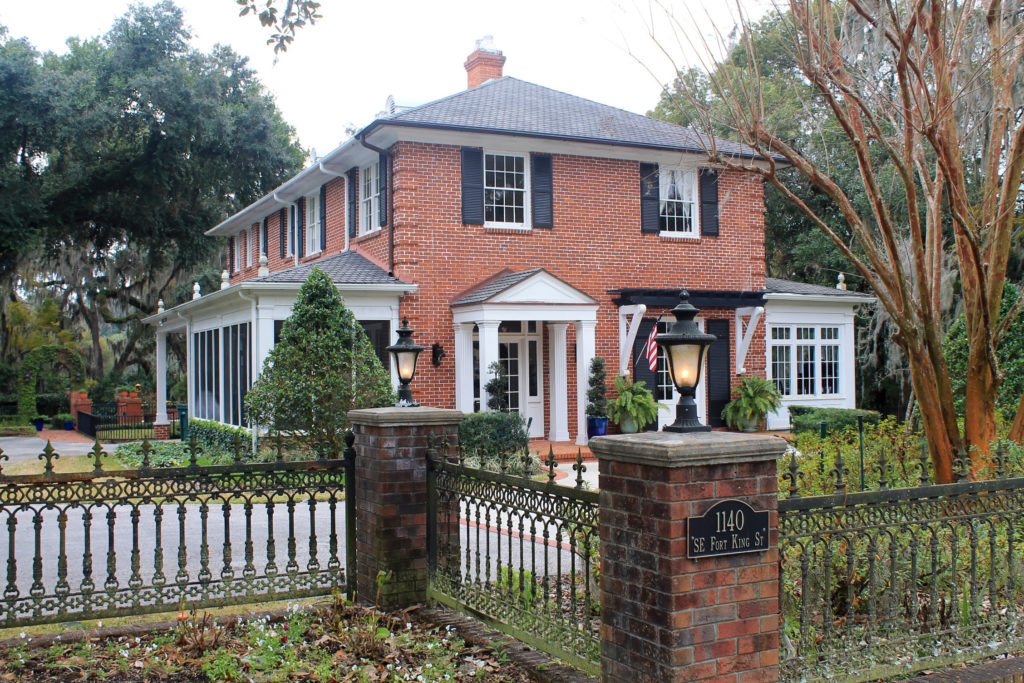 Built in 1907, the Taylor House features Neo-Classical architecture with a French influence. Although the structure started out as a one-story wood frame, the first floor was expanded in 1924. A second story was added and the brick exterior installed.

The home’s namesake owner, James Taylor, actually installed an elevator in the residence. Taylor was the owner of the Ocala Manufacturing Company. In 1927, he deeded land to the City of Ocala for the construction of an airport near what is now Highway 200.

Homeowners Todd Rudnianyn and R.J. Jenkins enjoy the scenic backyard where a pond and variety of sculptures add to the peaceful setting. Refreshments will be served on the back terrace during the tour. 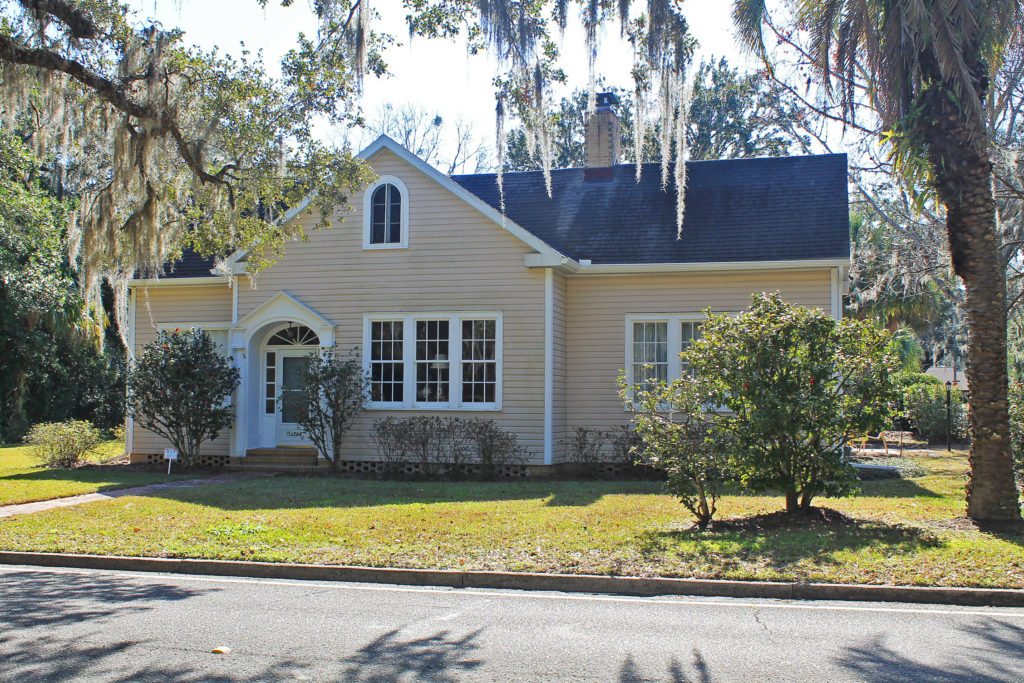 In 1909, this wood frame home was built for Captain J.A. Tucker and his wife. Winifred, and was initially a one-story home.

On January 5, 1931, the home was sold for taxes to Stephen C. McCready for $1,400. Not even a month later, on January 31, McCready turned around and sold it to Dr. E.G. and Justine R. Lindner. It was the Lindners who added the two back bedrooms, breakfast nook and a second story.

“This is the first time our home has been included in the tour,” says current owner Gary Turnley.

The Turnleys have made many memories in the home, as Gary was just 6 years old when his family moved in six decades ago.

Attention men: You won’t want to miss this stop!

Inspired by an early Gulf gasoline station in Weirsdale, Florida, the Albright family decided to create a retro garage where they could display a multitude of collectibles and local antiques.

This replica 1940s garage is just like a full-size station and covers 1,600 square feet. From the unique “Mae West” gas pump to the front door salvaged from Southern Plate Glass to the booths and tables from a former Ocala bowling alley, the station summons a step back in time. Numerous neon signs and other memorabilia add to the ambiance.

And what’s a garage without cars? Adding to the authenticity are an array of antique automobiles on display courtesy of Kingdom of the Sun Antique Car Club.

“This is a one-of-a-kind location,” says Stoothoff, “and has never before been seen on the tour.” 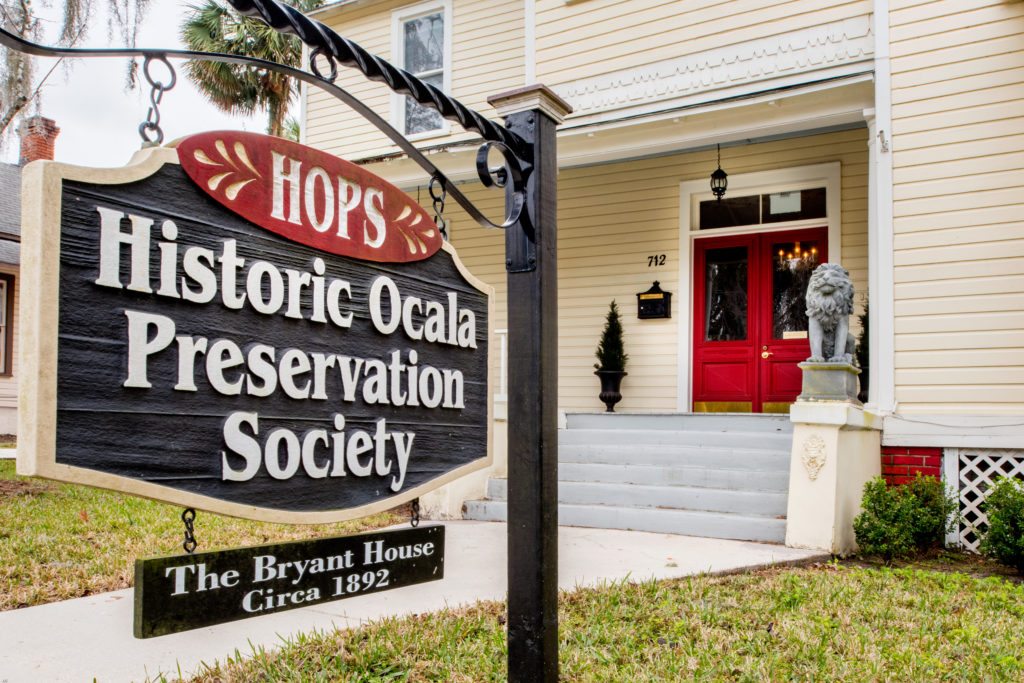 It’s only fitting that the home of HOPS itself is part of the tour, and this stunning wood-frame Victorian is certainly worthy of inclusion. HOPS purchased the home in August 2013 to restore and create a permanent home for the organization. The gracious facility is maintained by the volunteer efforts of HOPS’ board members. Prior to moving into the Bryant House, HOPS’ offices were located in the Snowden House in the Tuscawilla Historic District. HOPS restored this home over a period of eight years.

Built in 1892 by W.R. Bryant, the two-story house features Eastlake and Greek Revival influences and is graced by a large wrap-around porch. The welcoming interior greets visitors with a large front entry hall and bright, spacious rooms.

Mr. Bryant was the grandfather of Cecil Farris Bryant, who was born in Marion County and graduated from Ocala High School and the University of Florida before eventually becoming the 34th governor of Florida.

“The Snowden House had been made into apartments, and there had also been a major fire, which caused significant damage,” recalls Stafford. “Nearly 75 percent of the work on that house was done by volunteers. We took the house down to the studs and saved what we could, including the staircase. It was our headquarters for several years. Then we sold it to Children’s Home Society of Florida, who had been good neighbors of ours and needed more space. We used this money to purchase the Bryant House when it came on the market. Thankfully, it didn’t need as much work as the Snowden House.”

Tickets: $20 advance, $22 day of tour at any tour location, children 12 and under admitted free