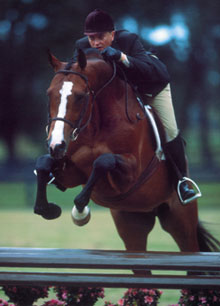 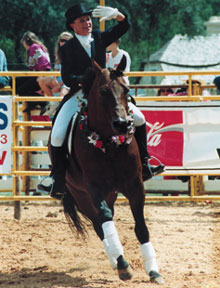 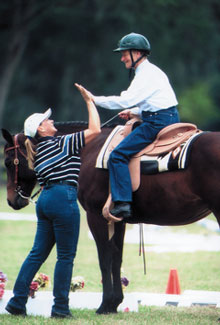 Lynn Palm knows what it means to be horse crazy. A nationally known competitor, trainer and instructor, her passion for horses blossomed into a career that has now spanned three decades.

One of the top competitors in American Quarter Horse Association (AQHA) history, Lynn has a consistent record of World Championship titles in both English and Western disciplines. She has won a record four AQHA Superhorse titles and was the first rider to win the prestigious Superhorse Title twice on the same horse: Rugged Lark. In 1991, she won yet another Superhorse title with a son of Rugged Lark, The Lark Ascending.

In 2000, Lynn was named Horsewoman of the Year by the Women’s Sport Foundation and the AQHA, and in 2003, Equine Affaire, the national equine exposition, honored her with its 2003 Exceptional Equestrian Educator award. Lynn continues to compete, coach and judge. She educates many riders each year through her Palm Partnership Training schools and appears as a clinician at equine industry events across the country.

But Lynn still vividly remembers what it felt like to be a kid with a serious case of “horse fever.”

Born into “a completely non-horsy” family, one of Lynn’s earliest memories is of looking out the window at the neighbor’s barn and paddock, where a black-and-white pinto pony lived. This little sprite of a pony officially started Lynn’s fascination with horses.

Born in Philadelphia, Lynn spent her first years in Kirkwood, New Jersey, before her father’s career took the family to Sarasota, Florida. There, to six-year-old Lynn’s delight, they settled into a neighborhood of mini farms. With a whole five acres just waiting for an equine resident, Lynn’s parents relented to her pleading and bought her first pony, a bay mare Lynn named Sugar. She still owns the child-sized Western saddle that came with that first pony.

As fate would have it, just down the road was a red barn with white trim. It looked like a “picture book perfect” farm and young Lynn was smitten.

“After school and on the weekends, I rode my bike down in hopes of seeing someone on a horse,” she recalls. “I saw a lady riding and after a number of visits on my bike, she asked me to come in and see her horses.”

This casual introduction was how Lynn first met Ms. Bobbi Steele, the talented horsewoman who became her mentor and greatly influenced her future career.

To a horse-crazy girl, Ms. Steele’s life story sounded like a fairy tale. Born and raised on a farm in Illinois, she had run away from home at an early age to ride in the rodeo. Later, she joined the circus and became a performer. She was hired as a rider with Ringling Bros. and made the circus her life for at least a decade. She specialized in riding high-level dressage and also had a broad repertoire of tricks. After Ms. Steele left the circus, she continued doing exhibitions with her own horses at major horse shows across North America. She later retired to Sarasota, which was where Lynn met her.

“When I met Ms. Steele, I was eight or nine years old, but I never really knew how old she was,” says Lynn. “She wanted me to start riding with her and my parents never had to pay for a lesson. She was my mentor and introduced the whole world of horses to me. She always emphasized that the principles of dressage could be applied to any breed of horse and to any discipline, something I still practice today. I rode at Ms. Steele’s farm six days a week for years before she thought I was good enough to enter a show ring.”

It was Steele who helped Lynn train Mocha Dell, the first horse Lynn would ride bridle-less in performances.

In the late 1960s, Lynn begged her parents to send her to Golden Hills Academy, a private Ocala high school with a horse program, owned and operated by the Castro family.

“By the time I was in high school, my parents had accepted the fact that I was determined to follow a career with horses and that college wasn’t part of the plan,” says Lynn. “They took the money they’d saved for college and allowed me to attend Golden Hills in my senior year. After I graduated, Mocha Dell and I got a job at Frontier Town, a Wild West-styled tourist attraction in North Hudson, New York. We performed three shows a day, seven days a week, and even learned to do some trick riding.”

Lynn showed her first World Champion Quarter Horse in 1976, a gelding named Lecanto Raider. (Yes, he was from Lecanto, Florida.) Through the years, she has shown numerous World and Reserve World Champions, but many fans still consider the bridle-less routines she performed with the amazing Quarter Horse stallion Rugged Lark, bred and owned by Ocala horsewoman Carol Harris of Bo-Bett Farm, among her most memorable performances.

“Although I did my first bridle-less routines with Mocha Dell in those early years, it was with Rugged Lark that my bridle-less exhibitions really made an impact,” Lynn says. “Rugged Lark and I started performing together after he won his second AQHA Superhorse title. We began doing bridle-less routines set to music and ended up performing at many major shows, including the National Horse Show and the 1996 Olympics in Atlanta.”

Following Rugged Lark’s official retirement, Lynn felt it was time to direct more of her time to educating riders.

“I’ve always taught and coached, even when I had my own heavy competition schedule, but today my energy is more focused on education,” she explains. “I want to give back to the industry that’s been so good to me.”

Since Lynn established her equestrian schools in 1982, thousands of students have attended. Today, Lynn and her husband, French rider and instructor Cyril Pittion-Rossillon, teach these Palm Partnership Training schools, which are aimed at riders of all levels.

“The word ‘dressage’ literally means ‘training,’ and our schools incorporate dressage principles,” notes Lynn. “Our concepts are designed to put the horse and rider together in harmony using time and patience and training methods that respect the animal.”

Schools are open to riders in all disciplines and any breed of horse. Although a rider doesn’t need to have the desire to compete to attend her schools, Lynn finds that about half the students are active in showing.

“We train seriously, but we play hard, too,” Lynn adds, mentioning that swimming, golf outings, bonfires, and cookouts complement time spent in the saddle.

Lynn’s fondness for the Ocala area has intensified since her year at Golden Hills Academy, and particularly since she and Cyril bought Fox Grove Farm in 1998 from long-time Ocala horseman, Raymond Burr.

“It’s beautiful with the live oaks and rolling hills, and I think the farms here in Marion County are more unique than in other ‘horsy’ areas. There are all kinds of horse people and different breeds, which makes it that much more exciting.”

In between clinics, expositions, and teaching at her schools, Lynn still finds time to show, often riding the two sons of Rugged Lark she owns. She even performs a bridle-less routine on her stallion, My Royal Lark, similar to the one she used to do with Rugged Lark.

Seeing Lynn with her horses, it’s clear that she is most at home around her four-legged partners.

“All through my career, I’ve seen how horses bring out the best in people, and I think it is our responsibility to bring out the best in our horses. Horses taught me what I needed to succeed in life. Whether I had good days or bad days, my horses were always there for me,” says Lynn. “My life revolved around them then, and it still does.”