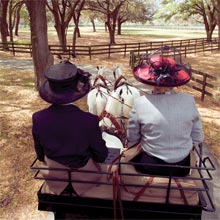 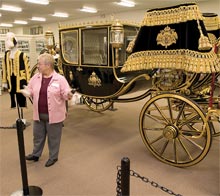 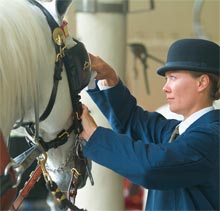 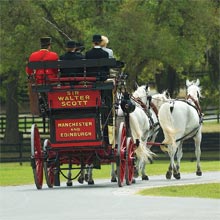 For most of us, the era of modern travel and the days of horse-drawn transportation are two distinctly separate worlds. Yet for carriage collector and driving enthusiast Gloria Austin, these two eras remain permanently entwined. With an eye on the past and another on the future, this energetic woman is determined to preserve the history of the horse and its profound impact on wheeled transportation. And to do so in a most inspiring way.

A lifelong horse lover, Gloria was raised on a farm in Troupsburg, New York, where her father bought and sold dairy cattle. She grew up on horseback, savoring the freedom she found in horses.

“When I got my horse out to go somewhere, my parents never asked me where I was going,” she recalls with a smile. “They figured I’d be safe with my horse.”

Over the past two decades, her fascination with horses and history has evolved into a most remarkable collection of carriages and wheeled vehicles. Fortunately for the rest of us, she shares her passion with the public through the Austin Carriage Museum.

Located on the edge of Lake County, just over the Marion County line, the Austin Horse Park covers nearly 400 acres and is home to the Austin Carriage Museum, as well as Continental Acres Equine Resort. The latter is actually a “B, B &B” (bed, barn and breakfast), where guests can vacation with their equine companions. The facility is also home to driving shows and events, including the popular Austin Carriage Festival, held every December (see sidebar).

One need not be a horse lover to stand amazed at the tremendous collection of carriages Gloria has put together over the past 20 years. The vast majority on display are restored antiques — only six are reproductions. Of the 175 carriages she currently owns, 163 of these may be viewed in the museum’s three different galleries. Another 10,000-square-foot addition is in the works and will be open by mid-2005.

In the European Gallery, the piece de resistance is the elaborate Golden Carriage, a meticulously restored 1850 Austrian coach that Gloria found at a restoration shop in Oregon in the late-1990s. To say the coach was dilapidated was no understatement — a framed photograph of the carriage as it was when Gloria bought it shows the phenomenal transformation.

“It took 18 months to restore, which is about how long it would have taken to build it originally,” she notes.

The stunning black-and-gold coach is displayed with a team of six life-size horses, complete with real horsehair manes and tails that were painstakingly created by artist Don Herschberger of Billings, Montana. Before he built the models, the artist came to Florida to measure Gloria’s own team of Kladruby horses, a breed of driving horses that originated in the Czech Republic.

Another notable display is a well-appointed private road coach made in Paris in 1899. Gloria bought and drove the coach in France in 1999, exactly one century after it was built.

Today we would hail a cab, but in early days those not fortunate enough to have their own road coach relied on a commercial road carriage. In those days of “non-political correctness,” an oversized passenger was required to pay for two seats!

Among the many carriages are “sociables,” coachman-driven carriages, so named because passengers sit facing one another for sociable conversation. There are two Victoria carriages in the collection, named after Queen Victoria, as this style was thought to be her favorite. Driven by a coachman, one of the Victorias features a spiked “urchin bar” designed to keep children from grabbing hold or climbing onto the back of the carriage.

Tires on the displayed carriages range from wood or iron to hard India rubber. Although inflatable tires were seen on French carriages as early as 1847, they didn’t hold up well and didn’t become popular until decades later when the roads improved.

In the Americana Gallery, visitors get a close-up look at the horse-drawn vehicles that helped build our country. Unlike the grand European carriages, many of the American models were more utilitarian and built so that people at all income levels could afford to own them, even if they just had one horse.

The Conestoga Wagon was the “tractor trailer” of its time, made to transport goods in the early-1800s. The driver walked and a slide-out “lazy seat” on one side allowed him to take a break now and then. The going rate was approximately $1 per 100 pounds of goods shipped per 100 miles.

Visitors will see the Chuck Wagon, made famous in black-and-white Western movies, and the Peddler’s Wagon, which traveling salesmen used to sell wares from house to house in the early-1900s.

Looking like it jumped off the silver screen is a Concord Stage Coach, the Western version of commercial transportation. This model had a suspension system to keep the body from falling apart on rough roads and its rocking, back-and-forth motion often made passengers “sea sick.” Sitting next to the driver on the high seat was the guard who sounded the bugle when the coach rolled into town and carried a gun for protection, hence the term, “riding shotgun.”

Not all the vehicles in the museum have wheels. Two intricately detailed “sedan chairs” from the 1700s are on display. These one-person conveyances were carried by men, not horses.

But Gloria’s most unusual acquisition is the 1761 Muletiere, a two-person vehicle without wheels to which a horse was hitched in the front and the back. This enabled passage over simple footpaths at a time when roads were poor or non-existent.

There are also several sleighs, made popular for winter travel when farmers had the most leisure time. While melodious, the sleigh bells attached to the horses’ harnesses were purely practical and intended to let other drivers hear the sleigh coming before it could be seen. Bells were also used during foggy weather. The same practicality was behind the lamps found on many carriages. Rather than light the road ahead of the horses, the lamps were designed to let other drivers see the carriage in an effort to avoid collisions on dark roads.

The museum’s Modern Vehicle Gallery reveals the “missing link” between yesterday’s horse-drawn carriages and today’s automobiles. There are motorized carriages and a dapper, fully restored 1928 Rolls Royce capable of attaining speeds up to 65 miles per hour. Interestingly, the aluminum-clad, wood-frame body on the Rolls was built by Brewster & Co. of New York, one of America’s top carriage manufacturers.

One unique aspect of the Austin Carriage Museum is that it tells both the European and American versions of horse transportation.

“We have 5,000 years of history with the horse for transportation and only 100 years with the automobile,” Gloria points out. “When the Europeans came to the Americas, the Native Americans were living in a stone-age culture. Our civilization was built on the backs of horses. We had to have horses to advance.”

At least three days a week Gloria can be found in the driver’s seat with her team of Friesians or Kladruby Horses. She still drives many of the carriages in the collection and is hard-pressed to name a favorite.

“My favorite is whichever one I’m driving at the time!” she laughs.

Gloria is a walking encyclopedia of knowledge about the horse-drawn era. Speed limits in those days were based on the horse’s natural gaits, she explains. Contrary to all those TV movies that show coaches rumbling across the countryside with the teams at a gallop, the standard gait for horse-drawn travel was the trot. This two-beat diagonal gait is the horse’s most efficient gait and covers eight to 10 miles per hour. A horse in good condition can sustain a trot for eight to 10 miles before tiring, which is why many towns in historic New England are about that distance apart.

Such interesting history and trivia can be found in abundance during the lecture series held at the museum this winter. Starting in November and continuing through March, the series will feature Gloria herself, as well as Linda Beaulieu, museum curator and carriage driving judge, and other speakers. Cost is just $15 per lecture and lunch is available for an additional fee. (Call the office for dates and schedule.)

Although Gloria Austin made her carriage collection available for public viewing for years, the museum did not become a not-for-profit entity until 2001. She plans to leave the museum, carriages, and land intact for perpetuity, and adds, “so that people will not forget the impact the horse has had on civilization.”

Continuous horse performances, museum tours, and all-day activities. Admission is $10 for adults and $5 for children under age 18.

Wednesday-Saturday: 10am to 4pm

Children age 4 and under: FREE