A few years ago, a horse that had been abused and neglected came into Theresa Batchelor’s life at just the right time. Maybe that’s one of the reasons she works so hard to help other thrown-away horses have a second chance at life.

Back in 1997, after surgery to remove a tumor that was nearly severing her spinal cord, Theresa Batchelor was told there was permanent nerve damage and she would never be able to walk again.

Fortunately, Theresa isn’t the type of person who gives up without a fight. With the support of her husband, Bob, daughter, Katie, and son, Joshua, plus some large measures of faith and determination, she proved the doctors wrong. After months of grueling physical therapy, she regained use of her arms and legs, although even now, more than a decade later, she has no sustained feeling below her neck and must look directly at her arms and legs to know where they are in relation to her body (a condition called “proprioception”).

Even after she was able to walk again, the doctors told her to refrain from any activity that might jar her neck. Sadly, she resigned herself to the fact that she would never be able to enjoy her favorite sports again. No more rollerblading. No more horseback riding.

The good news was that Theresa was able to return to her work as a program logistics manager, at least on a part-time basis. The bad news came later, when back and neck pain again stopped her in her tracks. This time, her doctors found three herniated disks at the site where the tumor had been, and advised her that surgery was just too risky. She would have to learn to live with the nearly constant pain. 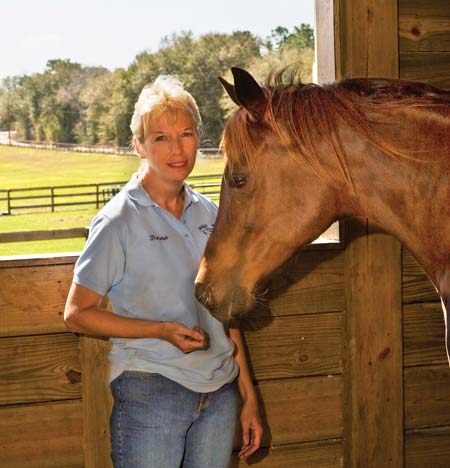 Theresa Batchelor still has physical limitations, but says “Beauty” (with her in photo) is always very careful with her. “She seems to understand she has to take care of me, like I take care of her,” explains Theresa.

Theresa realized that the stressful environment in which she was working was making her physical problems even worse. She decided for her well-being to leave the job—even if she was just short of the 20 years that would qualify her for retirement benefits.

Nevertheless, Theresa was determined to move forward and to be as active as possible. It was around this time that Theresa’s children began to take riding lessons near their Tampa home.

“As soon as I saw them up on the horses, I knew I had to try to ride again,” she remembers. “I asked the barn owner if there was an extra horse I could ride while the kids were taking their lessons. I just had to do it.”

Soon, Theresa was up on “Star,” an Arabian gelding.

“As soon as I was on his back, I felt like my life was beginning again,” she says.

A few weeks later, Theresa heard about an Arabian mare who had been seized from her owner due to abuse and neglect. The county was looking for someone to give “Beauty” a good home, where she could be safe and recover her health.

“I knew I needed that mare as much as she needed me,” Theresa says.

Theresa had to work long and hard to gain Beauty’s trust, but the mare in turn has paid Theresa back many fold.

“I always have to be very careful around the horses,” Theresa explains. “A wrong tumble could put me in a wheelchair again. But Beauty is always so careful with me. She seems to know my limitations.”

Everything began to fall into place after Beauty’s rescue. At first, Theresa boarded the mare at the barn where her children were taking lessons. Then she saw an ad for five acres with a six-stall barn for lease. 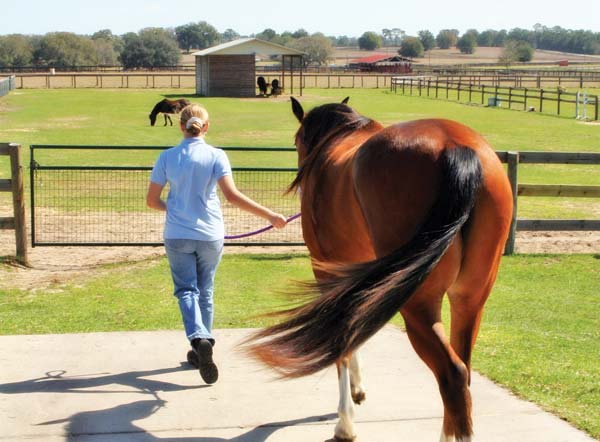 Theresa’s daughter, Katie, leads “Chloe” into a grassy paddock. Chloe was orphaned twice as a foal before she was rescued and brought to Beauty’s Haven. The equine rescue farm is located on 17 1⁄2 acres in Morriston.

“It was only 10 minutes away from us,” she says. “That was very unusual in that area.”

They decided to lease the property, and soon Beauty had plenty of company. Theresa and Bob purchased a horse for their daughter, Katie, to ride. And then, one by one, they took in other rescue horses who needed a good home.

“We didn’t think of ourselves as a rescue,” Theresa explains. “We were simply helping out horses.”

Four years ago, the Batchelors decided they wanted to live in the country full-time, and they wanted to find a place where they could continue their work with neglected horses. When they settled on a 17.5-acre property near Morriston in Levy County, Theresa decided to name the farm after her mare and call it Beauty’s Haven Farm & Equine Rescue. The family lives in a doublewide mobile home on the property near the barn, and three years ago, Theresa received 501(c)(3) non-profit status for the farm, which allows it to receive tax-deductible contributions to help with costs.

Under Theresa’s loving care, Beauty’s Haven Farm & Equine Rescue has quickly become a highly respected horse facility. In the last year alone, the Morriston rescue has rehabilitated and placed 50 horses. Each has a story, many of them heartbreaking.

“We take in some of the worst cases of abuse and neglect,” Theresa explains. “These horses need the kind of care that is very costly and time-consuming. Some of the rehabilitations have taken more than a year before the horse was ready, emotionally and physically, for a new home.”

Those who work with Theresa believe she has a special gift for communicating with the horses, who come to understand they can trust her. With that acceptance, the animals begin their road to recovery.

“Sometimes, people think a horse is crazy or mean, and have it euthanized,” she says. “One of our rescue horses, an Arabian named Magic, had been so badly abused before he came here, he couldn’t trust humans at all. His owner had beaten him. He wasn’t mean or crazy, just afraid. It’s taken a lot of time and understanding, but we believe he deserves a chance at life.”

Theresa is a woman of quiet faith and is immensely grateful for all the support Beauty’s Haven has received. A number of volunteers come once or twice weekly to help with the endless farm work, and people who want to help financially give what they can. Some may only be able to afford a few dollars a month, but every donation helps sustain the rescue’s work.

Some of Beauty’s Haven most ardent supporters are members of an organization called Fans of Barbaro (FOB), a group of thousands of people active in horse welfare issues. They support the late racehorse’s legacy by rescuing horses from slaughter and raising funds for selected horse welfare charities. FOB members have helped with specific Beauty’s Haven rescues, as well as other critical needs like winter hay for the horses.

Currently, Theresa reports, there are 29 horses on the property and one other being cared for at a foster home. Several of the horses have completed rehabilitation and are now ready for adoption. Others are still being rehabilitated. A few (like Gentleman, at right) are sanctuary horses and will always live at Beauty’s Haven.

“It wouldn’t be possible to help the horses the way we have if it weren’t for all the people who help support the rescue,” Theresa stresses.

As distressing and disturbing as some of the animals’ pasts are to learn about, Theresa is convinced the horses can still lead a productive and peaceful life. Her philosophy is reflected in the farm’s motto, “Where Life Begins, Again.”

“I feel very blessed,” says Theresa. “I feel like I’m doing exactly what I’m supposed to be doing.”

By the time “Gentleman” arrived at Beauty’s Haven in late 2006, he had already survived a couple of close calls. Theresa Batchelor, director of the Morriston equine rescue and rehabilitation facility, says that after serving 20-plus years as a draft horse in Pennsylvania’s Amish country, his owners no longer needed or wanted him.

“Like many other horses that are believed to no longer have economic value,” she says, “he was simply thrown away.”

But once at Beauty’s Haven, Gentleman thrived.

Theresa knew eventually the time would come to find Gentleman a loving “forever” home. That’s part of her mission. When someone suggested adopting Gentleman out to another rescue that specializes in draft horses, it seemed like the perfect answer.

In the meantime, everyone at Beauty’s Haven had grown attached to the big, gentle horse. Anne Boris, a volunteer who serves as treasurer for the non-profit organization, was especially saddened when it was time for Gentleman to leave, as were her sons Jax, 4, and Jason, 3.

“Jax had become very attached to him,” explains Anne. “Jax liked to talk to Gentleman, and the horse was very patient with him.”

The day Gentleman left for his new home a few hours away brought mixed feelings for his Beauty’s Haven family. They were sad to see him go, but also happy that he found a safe place to spend his final years. Theresa decided to keep in regular touch with his new home.

“I had a nagging feeling about him,” Teresa says, “but I kept telling myself he was in a highly recommended facility and in good hands.”

Just before Thanksgiving, Theresa received an e-mail with two recently taken photos of Gentleman attached. The sender was a person who lived near the rescue and was concerned about the horse’s welfare. He had been put in an out-of-the-way sandy pasture with other geriatric horses, and the sender believed they weren’t being properly fed.

“When I saw those photos, I started to cry,” remembers Theresa. “Gentleman looked like he had lost hundreds of pounds. He looked so sad.”

She arranged for the horse to be seen by a veterinarian. The report stated the horse was in “an unhealthy condition… had lost a significant amount of weight… and had very little muscle.”

Teresa knew Gentleman needed her help again. The adoption contract she and the other rescue director signed gave Beauty’s Haven the legal right to reclaim Gentleman.

Once back at Beauty’s Haven, Gentleman regained more than 200 pounds and is again the proud, healthy horse he was when he left. Jax Boris is especially glad Gentleman has come back to Beauty’s Haven.