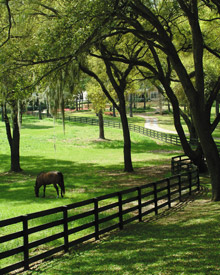 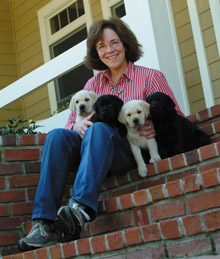 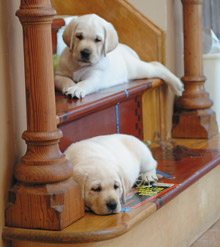 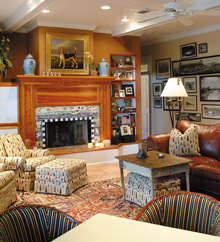 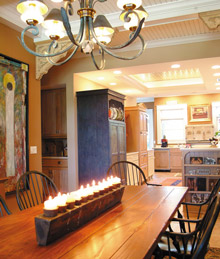 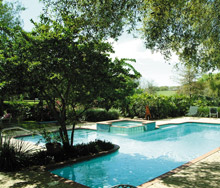 Mary Jane Hunt’s house reflects her fun-loving personality while at the same time meeting the needs of her busy life as a Thoroughbred and dog breeder. Here’s an inside glimpse into this unique Marion County home.

“Horsefeathers!” proclaims the modest sign at the farm’s front security gate. Traveling through the gate and up the drive under stately oaks and past luxuriant landscape, one might wonder at the capricious nature of the name. However, owner Mary Jane Hunt says the humorous name is a perfect fit for her personal design style.

“When I decided to build the new house, I wanted it to be lighthearted, not serious or formal,” says Hunt. “Because I collect primitive artwork and furniture and I also have a lot of family pieces, the mix keeps it whimsical and unexpected.”

In addition to a lighthearted atmosphere, Hunt wanted the house to have a feel for the rural, farm area. Her original concept included a wraparound porch and tin roof, but she had to make some economic trade offs, settling for front and back porches and a shingle roof.

“The house is not true to any one style,” Hunt says. “It’s kind of a farmhouse that works for me.”

Another priority for Hunt was that the new house respect the existing trees and landscape that surrounded the former house which Hunt had torn down. She followed through on this to the point that, when it was necessary to remove some existing cedars, Hunt had them milled and then dried the lumber in the barn for eight months before it was used for some closet interiors.

“Tina did a great job of capturing the views and fulfilling my needs. She listened to me and didn’t come with any agenda of her own.”

Hunt was equally pleased with her builder, Geoff Abbott of Mega Construction, and David Gadlage of Koontz Furniture who worked with her on the interiors.

“Geoff always sent quality crews, and David saved me from myself many times. I would have made a lot of costly mistakes without him, plus he’s a color wiz!”

Hunt, who over the years had mentally stored many of her own decorating ideas, laughs when she remembers that during a meeting early in the planning phase, Gadlage said to her, “Let me get this straight, my job is to say, ‘Yes, this looks great!’”

The result of their collaboration is indeed great! Hunt’s many and varied collections combined with architectural detail, materials, and a unique kitchen truly make the house a feast for the eye.

As with most successful artistic endeavors, focal points immediately draw the eye and create interest. The fireplace in the great room is one such feature and one that incorporates Hunt’s support of Florida artists. Artist Sharon McGinly, now residing in Pennsylvania but previously from St. Augustine, hand painted the tile surround. McGinly is a noted illustrator of children’s books, and Hunt has several of her vividly colored, original paintings, but the fireplace project was the first time the artist had worked in clay. She spent time getting to know Hunt and her family, and she rendered her interpretation of their life in the tiles. The top scene depicts some dogs with Hunt and her mother, the late Betty Hunt, in a boat in a central Florida landscape. The side tiles represent the cats, horses, and dogs that have shared Hunt’s life as well as one of her favorite animals: the pig.

In the study, local equine artist Debbie Fitzgerald turned the wooden door of a Murphy bed into a trompe l’oeil masterpiece, making it not only the focal point of the room, but also a must-see for each new visitor to the home. The scene is of a cat looking through French doors into a bedroom where several of Hunt’s dogs, both past and present, lounge around enjoying the good life. The movement of the scene continues out through a window to the distant pastures. The cat’s body is painted on the door while its tail is on the floorboards, adding to the three-dimensional effect.

The focal point of the master bedroom and high on Hunt’s list of priorities for the house is the 16-foot, built-in bookcases complete with library ladder and clothes storage cabinets below. Hunt, an avid reader, said the library unit was a nonnegotiable item in the house.

The kitchen is truly one of a kind.

“Mary Jane was very gutsy and used very unusual concepts, like in the kitchen where all the appliances are disguised in mismatched cupboards,” says Gadlage. “Mary Jane was a dream client — I couldn’t suggest anything too weird or crazy that she wouldn’t at least consider. There isn’t another house in Marion County like it.”

Some of the other architectural details used in the house include antique pediments, a cypress cupboard, and a heart pine newel post that Hunt purchased from Marleen Oberst’s “The Shop” in Micanopy. The floors in the master bedroom and study are made from heart pine salvaged by the Goodwin Lumber Co. in Micanopy from a John Deere factory in the Midwest.

Gadlage feels the house is a physical representation of Hunt’s outlook on life — outgoing, whimsical, and fun. “Mary Jane is one of the most wonderful people I know,” he says.

To which the unassuming Hunt probably would say, “Horsefeathers!”