Horses have been a constant in Velvet Saulsberry’s life. Today, as the equine programs director at the Ocala-based Thoroughbred Retirement Foundation Second Chances Juvenile Program, she is using her lifelong equine experiences to benefit at-risk youths. 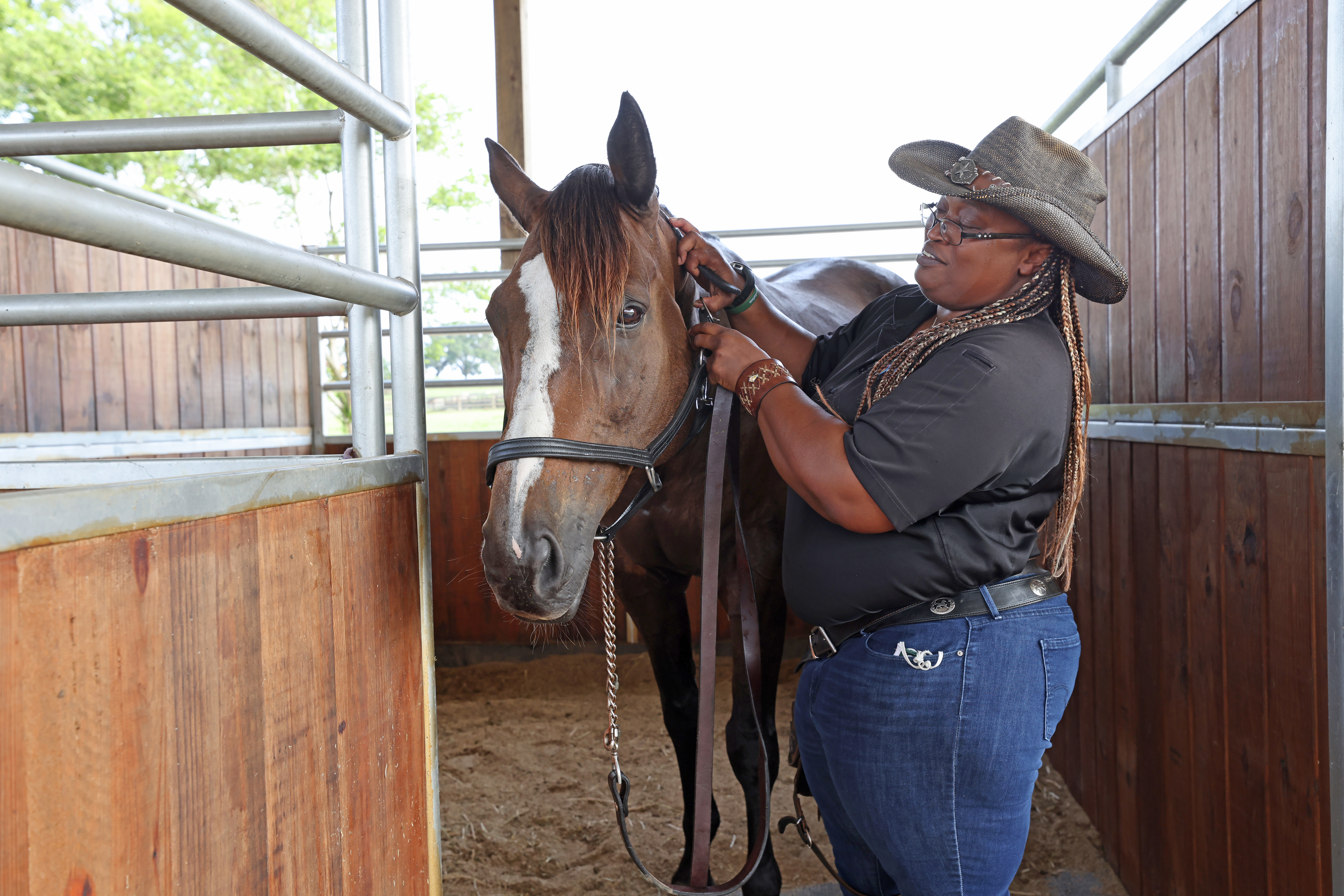 “When I was about 2, my mother started bringing me to my grandfather’s farm while she went to work,” recalls Saulsberry, 46, an animated woman with a penchant for spinning a story. “Well, while my grandfather went about his farm chores, he would put me up on his big ol’ plow horse. They tell me that I would hang on to the horse’s mane while it walked around following my grandfather.”

But even good plans can go awry.

“One day my mother got off work earlier than usual,” says Velvet with a chuckle. “Well, she found me hanging off the side of the horse’s neck, all tangled up in its long, thick mane. The story is that she snatched me out of the mane, gave my grandfather a few choice words and that was the end of that.”

However, it was not the end of Saulsberry’s connection to horses. Born and raised in Pensacola, she notes, “We lived in the rural section of town, where the paved roads ended and the dirt roads began.” The roads were great for riding horses and Saulsberry’s uncle, who had Tennessee walking horses, would often come to visit on horseback.

“I rode my uncle’s horses from the time I was a teenager until I left for college,” says Saulsberry. “When I got to the University of Florida, I became the first Black member of the UF equestrian team.”

While majoring in advertising, with an outside concentration in equine sciences at UF, Saulsberry worked at the farm of a professor who bred various warmblood horse breeds. She also began volunteering at a horse rescue sanctuary.

“I had come to believe that while the world is a beautiful place, it is not always fair,” shares Saulsberry. “Working at the horse rescue farm gave me a sense I could help these horses and put back some fairness in their lives.”

By the time she graduated from UF in 1998, Saulsberry had her first horse. Dondi, a Morgan/American saddlebred cross gelding, had been given to her on a care-lease agreement by that aforementioned college professor. Saulsberry then left Florida to work in various equine positions for the next few years, including at a dressage barn in Virginia. In 2004, she returned to Gainesville, where she had extended family, and her career path veered in a different direction.

“My family in Gainesville were all in law enforcement, not a field that I had ever thought of for me,” says Saulsberry with a shrug. “But it was pointed out to me that maybe I should make my habit of wanting to help official and go into law enforcement.”

Saulsberry applied to the Gainesville Police Department, which paid her tuition to the Police Academy at Santa Fe College. Soon after graduation, Saulsberry was hired by the Marion County Sheriff’s Office (MCSO) in 2006.

“Dondi and I moved to Ocala and I was so happy to be right in the middle of horse country. I was a patrol and detention deputy with MCSO. I also became part of the MCSO volunteer mounted unit,” says Saulsberry, smiling. “And, on my days off, I would do volunteer mounted patrol in the Cross Florida Greenway.”

Salusberry leases Sunny Oaks, a 10-acre farm near the Greenway. When Dondi was retired from riding, he was returned to his original owner. Sunny Oaks is currently home to equines Ariella Wolfsbane, an 11-year-old Morgan mare who had her first foal in June, and Rocbreaker, a 15-year-old standardbred gelding.

After nearly 13 years with MCSO, Saulsberry left in January 2019. By May, her career path shifted again, albeit still involving horses. She was hired by Youth Opportunity Investments LLC as the equine programs director at its Center for Success and Independence (CSI). The latter is a residential program for adjudicated at-risk male youths, ages 12 to 18.

The idea for an equine program at CSI was thanks largely to a matter of location. CSI’s neighbor is the Thoroughbred Retirement Foundation (TRF) Second Chances Farm. For the past 20 years, TRF has operated an equine educational program for female inmates at the Lowell Correctional Institution (LCI).

At the time Saulsberry was hired, it was a case of putting the idea of an actual equine program “cart” before the horse.

“The Thoroughbred Retirement Foundation and the Florida Department of Juvenile Justice had been in discussions for a while,” points out Saulsberry. “I went through three weeks of training with CSI and then began developing an equine program. We had 10 acres, but we had no barn and no horses. I had to get creative.”

Saulsberry reached out to the Ocala/Marion County equine community and explained her plight.

“The response from those in the equine community willing to help was wonderful,” says Saulsberry. “I was able to put the kids on a bus and take field trips to places like Stirrups ‘N Strides, Horse Protection Association of Florida, Gypsy Gold and the Equine Performance Innovative Center. This was a great way to introduce the kids to horses in so many different settings.”

But as the saying goes, there’s no place like home. By the end of 2019, the paddocks and the barn, built by the TRF Second Chances Farm female inmates, were completed on the CSI property. The TRF Second Chances Juvenile Program began quietly due to the pandemic. An official grand opening was held virtually on February 23rd.

Florida Department of Juvenile Justice Acting Secretary Josie Tamayo says, “We are excited to partner with the Thoroughbred Retirement Foundation to offer this unique vocational training to our youth. The equine program provides an opportunity to gain hands-on training while receiving the benefits of animal assisted therapy. This will allow our youth to further grow and build upon their skills to ensure a successful transition back into their home communities.” 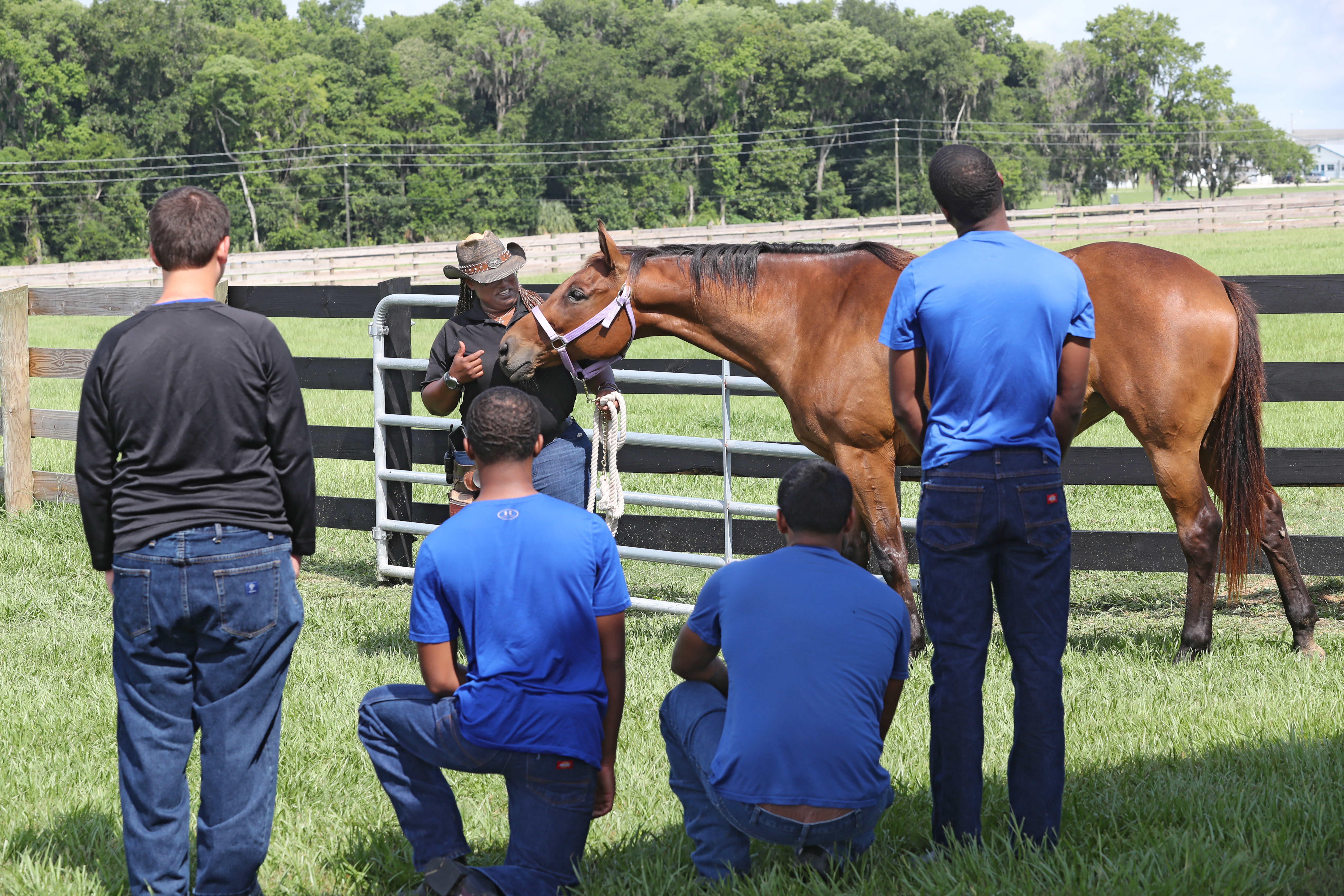 Now that there was an actual physical base for the TRF Second Chances Juvenile Program, it was time for the horses.

“I visited often with the TRF Second Chances Farm female inmates, talking to them about the horses they worked with,” reveals Saulsberry. “They knew the horses better than anyone and I knew what I was looking for in horses for our program. I ended up selecting Fifth Angel, Hurricane Sergio, Hemingway’s Key and Cut of Music to come over to our farm.”

As for the youths who participate in the equine program, they have to have been at CSI for 30-45 days with no issues and pass a risk-assessment evaluation.

“I only take five kids at a time, generally 15 to 18 years old. They get to the barn at 9am, four days a week,” explains Saulsberry. “First, they learn simple basics, like if you open a paddock gate make sure you close that paddock gate. They check the water tanks, scrub them clean and then make sure there’s always fresh water for the horses. These things teach them responsibilities, which most of them have never had.”

And because these youths have likely never been around a horse, Saulsberry introduces them slowly, one horse at a time.

“Fifth Angel is my introductory horse. She is the smallest and very friendly, so the kids don’t feel intimidated from the get-go. By the end of the program, they are working with all the horses,” says Saulsberry. “I explain to them that horses are prey animals and can see us as predators depending on how we act. I teach them about how horses read our body language. This ends up teaching them about our body language around each other as well.”

The kids learn to clean stalls, groom the horses, use side reins and lunge lines. Because of liability issues, the kids are not taught to ride. They learn basic veterinary care from Dr. Alberto Rullan, farrier work from Waldo Raymond Wheeler and have gotten saddle/ground work education from Grand Prix dressage instructor Bernardo Vergara. All three men volunteer their time and Saulsberry notes, “I am so grateful for all of them. I really couldn’t do this without them.”

Pat Stickney, TRF executive director, is also quick to give credit where credit is due, saying, “Velvet has been instrumental to our success getting this program off the ground. Her dedication to helping these young people build better futures is tireless and our horses are fortunate to have her in their lives.”

Saulsberry generally has a youth in the equine program from three to six months. They leave with a certificate in introductory equine science and community service. For Saulsberry, the reward is in seeing the transformation of the kids from the beginning to the end of the program.

“The kids come in with a lot of behavioral issues. They feel invisible and hopeless about their futures,” Saulsberry offers. “But by working with these horses, they learn about responsibility, teamwork, compassion, competency and achievement. I think this gives them a chance to see there are other paths in life beside the one that got them to where they are. My hope is that they leave with hope.”