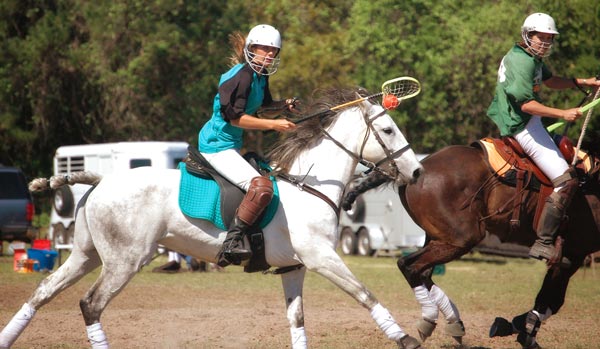 Samantha Stewart and her Cracker horse, Blue, on the move to another goal!

When she was but four years old, Eustis teenager Samantha Stewart began saving her allowance money to buy her first horse. By the time she was eight, she’d saved $1,100 and bought an Arabian/Quarter Horse gelding.

Now 15 and still horse crazy, Samantha was selected this year by the American Polocrosse Association as a member of its national 17-and-under team. Samantha and her teammates spent July traveling through North Carolina, Alabama, and Tennessee, competing against an Australian youth team. Next year, the U.S. team will return the favor and journey to Australia.

“I feel honored that I was picked for the team,” says Samantha, who is a member of the Wekiva Basin Pony Club and the Charlie Horse Polocrosse Club. “I love riding and I love playing polocrosse.”

The achievement of being named to the U.S. team is all the more remarkable considering Samantha has been playing the sport for less than two years.

“Some friends and I were trail riding one day,” recalls Samantha, “and we got to talking with some other riders on the trail. They told us that we should try playing polocrosse. I didn’t even know what polocrosse was.”

And what exactly is polocrosse? Think lacrosse on horseback.

Polocrosse teams consist of three or six members, which can be and usually are co-ed. Riders, who are assigned offensive and defensive positions, carry a 42-inch playing stick made of cane or fiberglass. The stick has an attached racquet head with a loose-thread net to carry the game’s softball-sized ball. While on offense, players toss the ball among themselves with the objective of scoring by throwing the ball between two goal posts. Of course, on defense the mission is to stop the other team from scoring. Like polo, the game is divided into chukkas, or periods of play.

Any breed of horse is allowed in polocrosse, but riders tend to prefer small, quick, and agile mounts. And like their riders, the good polocrosse horses are bold. On all counts, Samantha and her Florida Cracker horse, Blue, are a perfect match.

The official state horse, the Florida Cracker horse is a descendant of the horses brought here by the Spanish explorers. Small and hardy, the breed has been a longtime favorite of Florida cattle ranchers.

“Blue is very athletic,” says Samantha of the six-year-old, 700-pound gray mare. “She’s not afraid of anything. During a game, there’s a lot of contact with the other riders and horses when you’re trying to score or trying to keep someone else from scoring. That doesn’t bother Blue at all. She’s never gets tired and she’s always ready to play another game.” 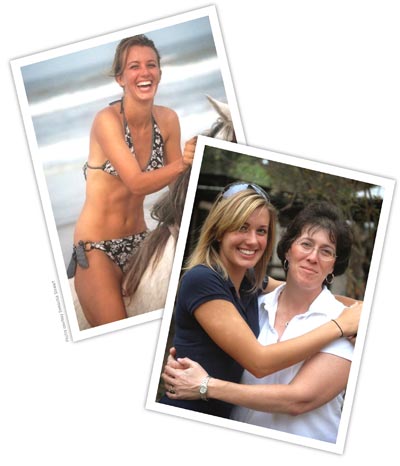 Samantha and Blue are regulars at Jamie and Debbie Zito’s Charlie Horse Ranch in Summerfield. Members of the American Polocrosse Association, the Zitos and Greg Russell have been coaching Samantha since she began playing polocrosse. A member of the Charlie Horse Polocrosse 16-and-under development team, Samantha will also ride the Zitos’ Quarter Horse, Cutter, during the USA-Australia games. The Zitos’ 70-acre ranch has three polocrosse fields, including a lighted one for nighttime games. Polocrosse games are played every Wednesday and Sunday, open to players of all levels.

“Samantha is our team’s great young hope,” says Jamie Zito. “The key is to put a good rider and a good horse together. Samantha and Blue are a great match. We expect great things from Samantha for many years to come.”

Samantha’s mother, Leslie Patterson, is happy with her daughter’s passion for all things equine.

“Samantha has always been horse crazy,” says Leslie, a business sales rep who has also started playing polocrosse at a beginner’s level. “Having horses, being in a pony club, and playing polocrosse have given her discipline and focus. And she’s having the time of her life. I am very proud of her.”

In addition to Blue, Samantha, who is homeschooled, also owns “Bella,” a four-year-old Friesian/Thoroughbred cross filly, and “Jewel,” a 14-year-old Quarter Horse mare. Not surprisingly, she’s thinking of making horses her vocation as well as her avocation.

“I really want to go the University of Florida,” says Samantha. “I’d like to get a business degree to help me run my horse business. I’m not sure yet exactly what that’ll be, but I know that horses will always be part of my life.”