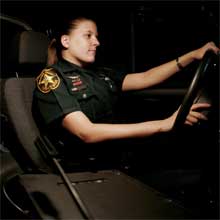 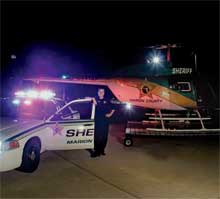 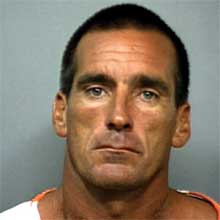 A DUI stop at 1:20am has gone very wrong. In the middle of the sobriety tests, the suspect suddenly attacks the deputy. A struggle ensues; the deputy uses a Taser on the man and wrestles him to the ground. I breathe a sigh of relief, thinking it’s over. I maybe even smile, thinking, All right, I’ve gotten a little bit of excitement to write about on my ride-along.

But instead of being over, it only gets worse. The man is only momentarily debilitated by the Taser, not long enough for the deputy to handcuff him, and now the fight intensifies. As the deputy tries to regain control, the man’s white T-shirt rips apart, he scrambles to his feet, and runs. The deputy is in quick pursuit into the darkened neighborhood, both figures disappearing from my sight. I’m left sitting in the patrol car, stunned and wondering what, if anything, I should do. Should I try to use the radio and call for backup? I know better than to get out of the security of the locked patrol car. What if I hear a gunshot? What if the man comes back and the deputy doesn’t? It’s amazing how the human brain can quickly process a situation, even an improbable situation, in a few seconds that feel like an eternity.

Then like a nightmare come to life, the man runs out of the darkness back toward his car, jumps in, and starts the car. My heart is pounding. Where’s the deputy? Hurt? Worse? Another surge of relief as the deputy races up to the car, reaches into the driver’s side window with the Taser. But to my dismay, the car starts to pull away! My pulse is racing now: He’s going to drag the deputy! The same thought must have gone through the deputy’s mind, too. I let out a tense breath as the deputy steps away from the car just in time before it speeds off.

The deputy runs back to the patrol car, jumps in, is calling for backup when to our surprise, we see the man’s car make a U-turn and head straight for us! I put my hands on the dashboard and brace for a collision. At the proverbial last moment, the car veers away from us, screeching tires leaving a spray of gravel and dust. The deputy steers the patrol car around in pursuit, lights flashing. But when we reach the main intersection, the suspect’s car is nowhere to be seen. He had to have turned right off into one of the side streets. We take off down the nearest, searching while the deputy communicates with the dispatcher.

No sight of him as we loop back around to the main intersection, pause for a moment to get our bearings, and anticipate a backup unit saying the car has been spotted. Another car, not a patrol car, pulls up next to us. A man gets out and tells the deputy that someone has just crashed into a fire hydrant right up the road. It has to be the suspect.

Off we go again, pulling in right behind the car that has indeed crashed into and come to rest on top of a fire hydrant. Water is spraying from the fire hydrant beneath the car, a pond forming that will quickly turn into a lake and then a river flowing down the highway. The deputy first calls in our location and situation before cautiously approaching the car.

But the car is empty, except for the deployed airbags. The suspect has fled on foot, likely into the nearby neighborhood.

Now we have company, lots of company. Sheriff’s deputies, a supervising sergeant and captain, a K-9 unit, Ocala Police Department officers, firemen. The scene becomes surreal looking as all the patrol cars’ flashing red, white, and blue lights brighten the wee hour darkness. Up above, a half-moon in a star-lit sky adds to the illumination.

I stand there in the middle of it all, watching the deputy take off with the K-9 officer into yet another dark neighborhood. I shake my head in wonderment at how a ride-along with a young female deputy for an article on women cops has turned into quite a story indeed.

At 23, Marion County Sheriff’s Deputy Heather Queen is an athletic, fresh-faced, All-American girl who looks like she could’ve just graduated from high school yesterday. She has lively light blue eyes and wears her nearly waist-length ash brown hair in a long ponytail. Despite her youth, there is a calm confidence about her. And because of her youth, she exudes boundless energy. Her nickname in high school was Queenie; her fellow deputies call her that, too.

Heather always wanted to be a cop.

“I don’t know where I got the idea,” she says before the 6pm to 6am patrol shift briefing. “But I knew that I was going to be one.”

And while Heather doesn’t know where this desire to become a cop came from, she can tell you why: “I want to be involved, to help people, and make a difference.”

With unwavering determination and a little touch of fate, Heather got a head start on her law enforcement career. The star goalie for the North Marion High School soccer team took the Criminal Justice Course offered there; at 15, she enrolled in the MCSO Junior Deputy Explorer Program. After high school, she bided her time with a variety of odd jobs until she was old enough to enroll in a police academy program.

“You have to be 21 to buy your own bullets while you’re in training,” she explains. “The minute I turned 21, I was signed up in a program.”

Enrolling in the law enforcement program at Withlacoochee Technical Institute, Heather admits “the training was tougher than I’d thought it would be.” Surprised but undaunted, she completed the nine-month program and graduated in May 2003. She immediately applied with the MCSO, volunteering with the Emergency Squad and ATV Unit while waiting to be accepted. On November 2, 2004, the call she had been waiting for all her life came.

She had been accepted.

“I was so excited,” she says, smiling from the memory even now. “I just started screaming and jumping up and down. My family thought I had gone crazy.”

That key moment for Heather was shortly followed by another. “The first time I put on my deputy’s uniform, strapped on the belt, and then looked in the mirror, I said, ‘All right, I’m a cop.’ It gave me goose bumps.”

After a three-month, four-part phase-in period, Deputy Heather Queen was in a patrol car of her own and on the road. Now on the job a year and a half at this writing, she is part of the patrol unit responsible for Marion County’s Northwest District, Sector 3. While she knew she would have to earn the respect of the other deputies, she never felt she was treated differently because she was a woman.

“I never felt any kind of prejudice toward me at all,” she says. “I’m sure it was tougher for the women deputies in the early days, but that hasn’t been the case for me at all. Yes, I had to earn the other deputies’ respect and trust, but it’s that way with every rookie, not just with the women deputies.”

A goal-oriented adrenaline junkie, Deputy Queen is dedicated to a career in law enforcement. And she has plenty of ambition to go along with that dedication. Her goals include becoming a K-9 deputy and the first female SWAT deputy. She has already accomplished a first for a female deputy, recently being certified as a part-time helicopter observer with the MCSO Aviation Unit.

“The plan is to do anything and everything I can as I move up the ranks,” she says confidently. “I love being a cop and I’ll always love it. I plan to retire with a smile on my face.”

After a 30-minute search, the K-9 is unable to track down the suspect. By now, deputies have located the man’s girlfriend and brother. The former is brought to the scene, where she files a statement saying her boyfriend allegedly stole her car while they were playing pool at a nearby lounge.

Nearly two hours after the DUI stop, all that can be done has been done. The deputies start to clear the scene, a county engineer has shut off the fire hydrant, and a tow truck is on the way to haul the wrecked car to impound.

A BOLO (Be On The Look Out) alert is issued for the man and Deputy Queen will apply for an arrest warrant. Instead of going to jail on a DUI charge, the man will now face much more serious charges when apprehended.

For Deputy Queen, it was just another night doing the job she loves. It was also a reminder that when you’re a cop, there is no such thing as a routine call or a routine stop. In the blink of an eye, it can turn into a life-or-death situation.

But the most important thing on this night is that Deputy Queen went home safe and sound. For her, there will be another tomorrow to catch the bad guys. Guaranteed.

Editor’s Note: The suspect, Andrew Bento, was arrested by MCSO deputies two days following the incident described in this article. He was charged with battery on a law enforcement officer, felony fleeing and eluding, resisting a law enforcement officer with violence, aggravated assault with intent to commit a felony, and DUI. Deputy Queen was present when Bento was booked into the Marion County Jail. Bento pleaded guilty to all charges and was sentenced to 20 years.