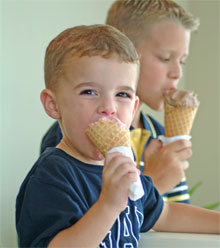 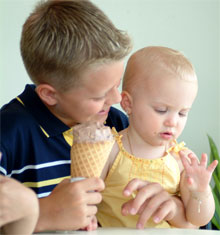 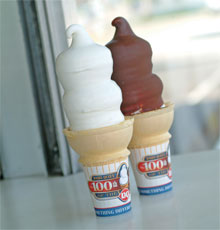 Nothing hits the spot on a sweltering summer day quite like a cold, creamy dish or cone of ice cream. As I hurry to finish the ice cream before it melts, it brings back memories of chasing after the big, colorful ice cream truck, its cartoon-like music emanating throughout the neighborhood, as I tightly clutched my quarters. Ah, those were the days!

No matter what your particular reason for loving ice cream may be, it has been a perennial favorite amongst children and adults alike for more than 400 years. That’s right, 400 years!

According to the Website pastrywiz.com, ice cream as a dairy delight probably originated in the 1600s. The concept of flavored ices goes back even further, but no one is sure exactly when. We do know that the chef of Charles I of England made ice cream a staple of the royal family’s table.

Depending on which version of the story you come across, either the chef had a classified recipe for ice cream and the king paid him a handsome reward to keep it a secret, or the chef was threatened with death if he divulged the recipe. Either way, once Charles I was beheaded in 1649, the chef shared his secret ice cream information. Soon nobility in Europe and the rest of the world knew of, and enjoyed, “crème ice.”

Of course ice cream as we know it has come a long way since its inception. One of Marion County’s newest ice cream parlors, The Marble Slab Creamery, is causing quite a buzz among the ice cream-eating community (It was voted “Best Petite Restaurant” in this year’s Taste of Ocala.)

Ever mumble to yourself that the toppings on your sundae or ice cream cone are just that — only on the top? Tools in hand, the staff at the Marble Slab makes sure that’s never a concern.

Using a sheet of frozen metal, topped with a slab of marble, the employees at the Marble Slab neatly and efficiently fold each customer’s chosen mixings right into their ice cream, guaranteeing even distribution. This is affectionately coined, The Marble Slab Way.

“The slab is kept at minus 3 or 4 degrees to ensure that the ice cream won’t begin to melt when the flavors and toppings are being folded,” owner Charlie Patel says.

Let me tell you from first-hand experience, the ice cream at the Marble Slab is even better than Ben and Jerry’s. (In my humble opinion, a feat that’s hard to accomplish.) I tried the vanilla ice cream with fresh raspberries folded in and the sweet and sour tastes blended perfectly together. Of course, in order to give this story the proper attention it so rightfully deserved, I couldn’t stop at just one sample. One of my all-time favorite snacks is peanut butter, so when I saw peanut-butter-flavored ice cream on the menu, I knew that’s what I had to try.

I was happily surprised by the rich flavor and smooth texture of the ice cream, which, by the way, did taste exactly like peanut butter.

Everything at the Marble Slab — from the hand-dipped cones to the ice cream itself — is made not only from scratch, but also on-site.

The process of making the homemade treats begins with only the finest ingredients — Swiss cocoa and chocolate bars for the chocolate-based desserts and a special vanilla extract as the base of the sweet cream mixture for the vanilla.

In the immaculately kept kitchen area of the parlor are huge freezers set to temperatures only those of us from the north are familiar with.

Once the various flavors are made, each container is placed in one of these freezers where it will stay for 24 hours at temperatures near 25 degrees below zero. This process ensures a safe product and kills any food-born bacteria.

“All of the ice cream in the freezers tonight will be for sale tomorrow,” Charlie’s daughter and co-worker Priya says. “We sell out of the ice cream so fast that it’s never here for more than a day or two. Our customers are guaranteed a fresh product every day.”

Following the 24-hour deep freeze, the frozen-solid ice cream is then moved to a different freezer where it’s thawed at a bone-chilling minus-2 degrees.

“If we didn’t do this step, we wouldn’t be able to scoop out the ice cream,” Priya adds.

Okay, so now you know a little about the basics of making the Marble Slab ice cream, now let’s talk selection.

Besides the staple flavors like vanilla, chocolate, and strawberry (along with favorites like cookies and cream made with real Oreos and cookie dough ice cream) customers can also try these unique flavors: amaretto, cheesecake, peppermint, rum, mango, birthday cake, and chocolate Swiss, just to name a few!

The toppings (or mixin’s as they’re called at Marble Slab) are almost endless and include a huge variety of nuts and candies.

As if all the ice cream choices aren’t enough to satisfy your sweet tooth, customers can also choose from a wide variety of specialty dessert items, including smoothies, latte shakes, strawberry shortcake, and, of course, old-fashioned floats. On this particular day, and after much indecision, Louise Hoffman decided she would try just that — an ice cream float.

As the young clerk handed her a huge glass and the rest of her root beer from the bottle, Louise smiled.

“This is all for me?” she asked. “Wow! Normally after they make you a float, you don’t get the leftover soda, too. I guess here you get it all.”

And after taking a sip, she said, “And it’s delicious, too.”

Her sister, Gertrude, added that her hot fudge sundae was “one of the best I’ve ever had.”

Five local places to get your dairy delight!

Family-owned and -operated for the past seven years, the Frosty Spot also offers a complete selection of deep-fried foods. 307-2552

Ms. Steve’s offers the ultimate in convenience with its drive-through-only policy. Try one of their old-fashioned peanut butter shakes! 245-7705

Just as the name applies, this chain restaurant is famous for thick, creamy milkshakes, made with — You guessed it! — real milk! Can’t decide which flavor to try? Don’t! New this season is Steak ‘n Shake’s side-by-side shake. Choose any two flavors and have them poured together. 438-0057 or 873-1994.