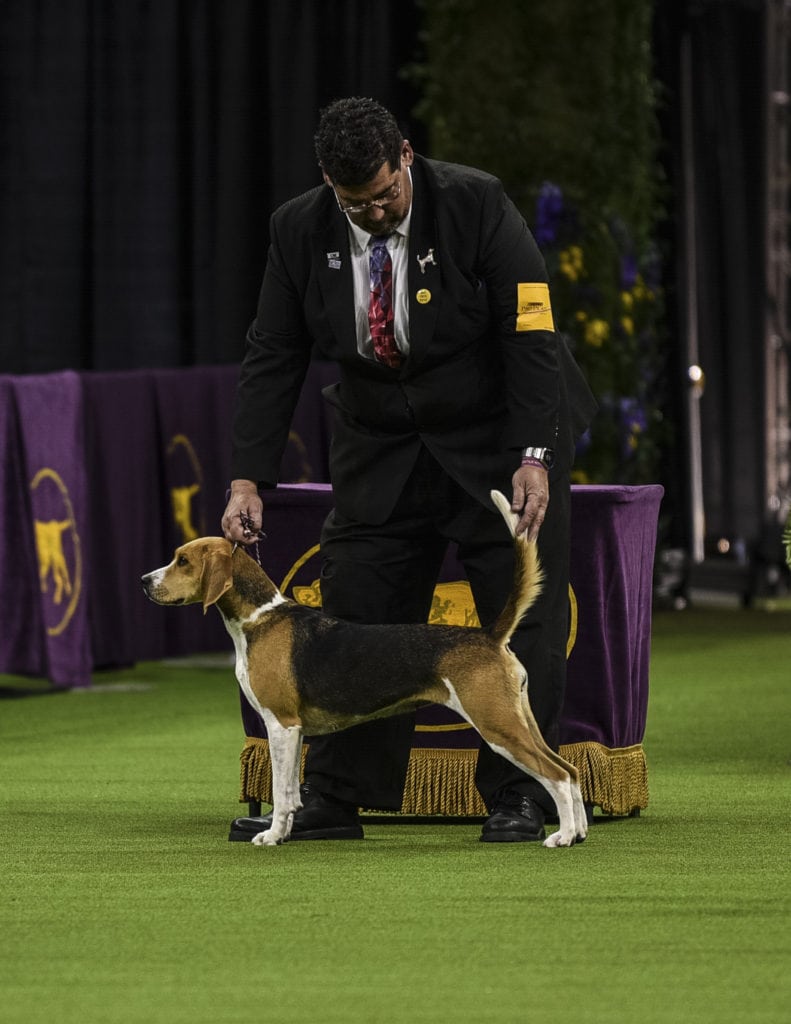 Emmy is a rare breed who has claimed rare dog show success.

According to the American Kennel Club, only 33 harriers were registered in 2017. The harrier was developed in England to hunt hares. A member of the hound group, the harrier is described as resembling a large beagle or a small foxhound.

Officially, Emmy’s registered name is Champion Blythmoor’s Jump at the Chance. And she has lived up to her moniker, making the most of every opportunity in the show ring. Emmy has won a long list of awards, most notably the highly coveted Best of Breed at the Westminster Kennel Club Dog Show on February 12 at Madison Square Garden.

Sharing Emmy’s path to stardom are Ocala residents Mike and Phyllis Gowen, who started out just looking for a pet.

“When Phyllis’ beagle, Wiggles, died, she was heartbroken. Phyllis wanted to get another small, 13-inch beagle like Wiggles, and I wanted a larger 15-inch beagle,” says Mike, who with his wife operates Digital Magic Designs, a graphics and multimedia design firm. “Phyllis remembered seeing a harrier while watching the Westminster dog show and thought that might be a compromise. We found a breeder in Oregon and bought Emmy when she was 8 weeks old in 2014.”

There were no plans to show Emmy, but an invite to an Orlando dog show changed things.

“The Harrier Club of America had Emmy in their “Meet the Breed” booth. Hound experts kept raving about her being such a great representative of the breed,” says Mike. “We started thinking maybe showing her would be a fun thing to do. I was very fortunate to get great show handling mentoring from Aaron Wilkerson, one of the best in the business. By her third show, Emmy was a star in the making. Besides her great conformation, she has personality plus and knows how to get the judge’s attention.”

In their Volvo SUV, aka the “Harrier Taxi,” the Gowens hit the dog show circuit big time in 2017. Some 80 shows and 26,000 miles later, Emmy had been to Westminster and back.

“The whole Westminster experience was amazing. Emmy handled the whole thing better than we did,” says Mike. “Never did we think when we started this that we’d end up at Westminster.”

Next up for 4-year-old Emmy is motherhood. She’s to be bred to Champion Guernsey’s Grimms Rumpelstilzchen, aka Rummy.

“But the plan is to continue showing Emmy. Harriers hit their prime from 5 to 6 years old,” says Mike. “Emmy has brought such joy to our lives.”

Wiggles would be pleased.