In sports, two axioms are almost always true. One is that fans have irrationally exuberant expectations for backup quarterbacks. The other is probably the most difficult to achieve in sports played at the highest level, and it’s soon to be Gator backup QB John Brantley’s mission: 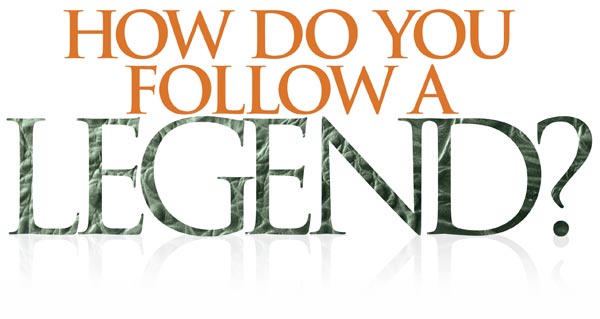 Three years ago, Ocala Style highlighted the great expectations facing then-Trinity Catholic quarterback John Brantley [“The Best Ever?” by Andy Campbell, September 2006], who had just completed a stellar junior season, leading the Celtics to a state title. In the months following the article, John answered the question by taking his team back to another state championship appearance and eclipsing the Florida high school state high-water mark for career touchdown passes.

The quarterback he erased in the record books, by one touchdown no less? Tim Tebow.

Fast forward to the present and not much has changed. John is still in Tebow’s shadow, serving as the understudy to arguably one of the best college quarterbacks to ever play the game. Yet the time spent away from the action has served John well and certainly hasn’t tempered the enthusiasm among Gator fans for the now-redshirt sophomore. 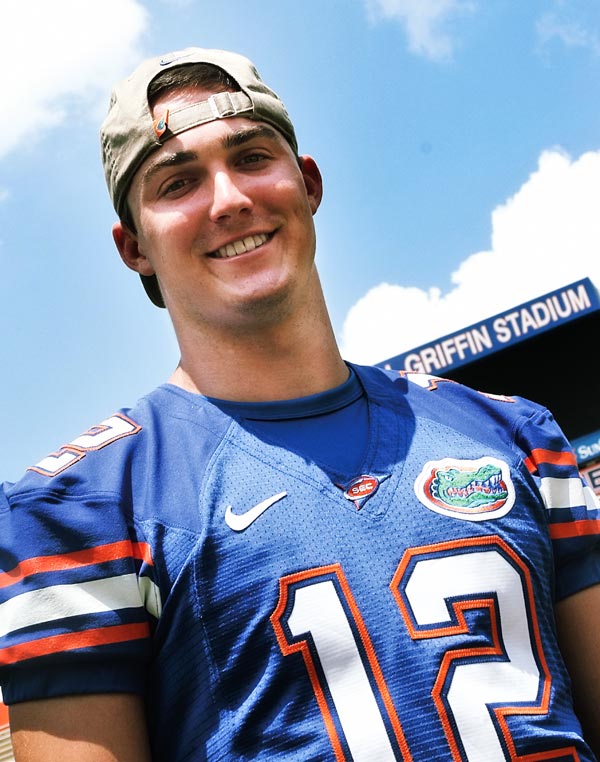 Ask Gator fans around Marion County about Brantley and they’ll talk—a lot. In fact, they may even tell you that the passing game could be even more explosive after this upcoming season, once Brantley gets the full-time gig and those Tebow-led fullback dives get tossed from the playbook.

After winning two titles in three years, a Heisman Trophy, and with the Gators entering this season as the prohibitive number-one team in the nation, Tebow has set the bar exceedingly high, and could possibly go down as the greatest Gator ever. Add to that a potentially stellar senior-year coda and suddenly John’s follow-up attempt isn’t getting any easier.

Yes, following a Gator legend is tough. Just ask Ron Zook, who had the unenviable task of replacing renowned UF coach Steve Spurrier. The troubles were many, on and off the field.

But while the road following a legend is filled with potholes and mines, it’s not impossible to navigate. In John’s case, his resume is stellar. From growing up with a rich football lineage and helping elevate the Trinity Catholic program to a state power under the tutelage of former Gator great Kerwin Bell to his success at the prestigious Elite 11 camp as a high school senior and all the accolades that came his way afterward, John couldn’t do much more to prove himself. Yet just a few months ago, in front of the Gator Nation at the annual Spring Game, John did just that, wowing onlookers with a 14-for-23 aerial display that included three TDs and 265 yards.

The lore of that performance will only grow, as team officials later revealed that John hit the field each time with a torn tendon in his right ankle. He underwent surgery shortly thereafter.

“Playing in the spring game was important for me, since I’d missed the last one,” he explains simply. “I learned so much.”

But Coach Meyer will need him to learn even more if John hopes to lead one of the elite offenses in the college ranks.

“Johnny’s biggest question mark was to not pout when he has a bad play or get so angry with himself that it takes two series to get it out of his system,” says Meyer. “I would see him drop his head, bite his lip, or not focus on the next play. I need to know that he can move on.”

As John prepares for his first real significant action on the field in 2009 and readies for a full-time role the year after, he knows his time is coming very soon.

“I’m really looking forward to this year,” he says. “I’ve been told how much playing time I get is up to me.”

“His raw talent was undeniable. I knew that he would be a valuable asset to our team, that he belonged here and would contribute,” Meyer shares. “Brantley is as natural a passer as I’ve had—and we’ve had some good ones.”

One of the biggest things John has learned is patience. It’s hard to imagine a talented player sitting the bench much, if at all, growing up, but for two full seasons he’s done just that on the Gator sidelines.

“I knew Tim was in front of me, and I expected to sit, learn from him, and be ready when I have my chance,” he says. “It has matured me in a lot of ways.”

John Brantley Sr. envisioned this scenario playing out just this way when he and his son made the decision to commit to Florida three years ago. As a former Gator QB and current head coach at Trinity Catholic, Brantley understands the intense commitment needed to go from high school superstar to college athlete.

“To play in a conference like the SEC, he was going to have to get adjusted to the speed of the game,” the elder Brantley says. “We wanted to get acclimated to the academic, mental, and physical aspects. We’re on our plan.”

Another benefit? This understudy period has given John, once lanky and wiry, time to pack on additional muscle in order to handle the rigors of hopefully playing every Saturday. While he will never be confused with the hulking Tebow, John has packed 20 pounds onto his 6-foot, 3-inch frame and now tips the scale at 215. 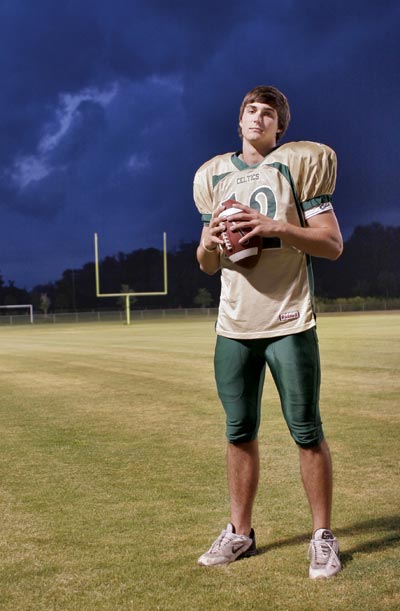 Despite all the waiting, this is 2009 and a year of dizzying projections for the Florida Gators. Above all that, though, is the friendship of these two college quarterbacks. John knows this final lap with Tebow is something he’ll always cherish.

“We spend a lot of time together,” he reveals. “I’ve been to his house; he’s been to mine. Whether we’re watching film or playing video games, Tim is out-of-this-world intense, a great leader. Hopefully, that’s rubbing off on me a little.”

The Heisman-winning quarterback certainly believes so.

“He already possesses those little things that are impossible to teach,” Tim says. “He’s not necessarily a running quarterback, but he is athletic and will do whatever he needs to in order to make a play. He’s going to be great.”

John Sr. sees his son’s role being a bit larger this season.

“We know this is Timmy’s senior year, but I do think he’ll get a few more meaningful snaps to prepare for next season, especially since two of the first three SEC games in 2010 will be on the road at Tennessee and at Alabama. One of the first two games is at home to a very good USF team.”

With just one year of eligibility remaining for Tim Tebow, Coach Meyer has identified what he’s seen in John that gives him reason for optimism.

“His professional approach is much better,” says the coach. “The seriousness, the attention to detail, the fact that he knows he’s this close to going in a game—it’s pretty serious. I expect a lot.”

The Gators’ amazing recent run has not only yielded league and national championships, but also bountiful hauls on the recruiting trail. So when John does get the keys to the offense, his job of running that high-octane machine should be easier, thanks to a handful of potentially explosive playmakers. Speedsters like Jeff Demps and Chris Rainey, as well as future stars like freshman Andre Debose, considered the “next Percy Harvin,” will be scoring threats from anywhere on the field.

“We have the fastest team in America,” John says. “Our goals will not change.”

While current quarterback Tim Tebow will break in the newcomers this year in an attempt to repeat as national champions, he knows he’s playing one last round with what should ultimately provide the core of John’s team.

“Obviously, I’m a bit more vocal on the field, but Johnny’s equally as intense,” Tim explains. “As his confidence in himself grows and he begins to recognize the confidence his teammates have in him, he’ll feel more comfortable as a leader.”

And whether John’s moment in the spotlight will come at various times this year or in 2010, following Tebow’s expected debut in the NFL, the Brantleys are optimistic about the future.

“Having the Brantley name, people look for more,” suggests his father. “But Johnny’s success will be about getting the ball into the playmakers’ hands.”

“It’s going to be tough to follow Tim,” admits the younger Brantley. “But I’ve tried to learn as much as I can so we can continue to meet our expectations as a program and not have a setback when he’s gone.”

Yes, it’ll be a challenge to follow a legend, probably the most difficult assignment in any sport played at the highest level. But if anyone can do it, John Brantley Jr. will. One thing’s for certain, his dad—who has bled orange and blue for decades—knows his son will be ready when his number’s ultimately called.

“Johnny’s dealt with pressure his whole life,” he offers. “He’ll be fine.”