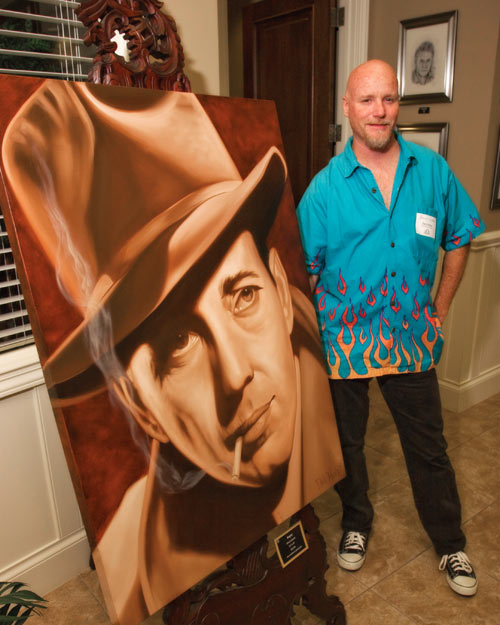 Dale Henry’s oil painting of country music legend Willie Nelson stops people in their tracks. From across a room, the piece can be easily mistaken for a photograph. But upon closer inspection, viewers realize this is indeed a painting and a marvel of its artist’s skill.

The Willie Nelson piece is perhaps his signature image. The original is large—three feet by four feet—but smaller giclée images can be purchased. Other large works with smaller giclées include paintings of Johnny Cash, Stevie Ray Vaughan, Heath Ledger as the Joker, as well as other contemporary icons.

Henry says he was drawing before he could write. He was born in Phoenix and then lived in Tehran, Iran, for four years, where his stepfather worked for General Electric. He returned to the U.S. in the mid-‘70s, moved in with his father, and completed high school in Colorado. 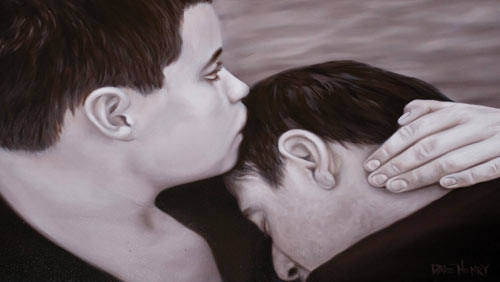 “I was lucky to end up in a school with a very good art program,” says Henry of the only art training he received.

After high school Henry moved to Texas and roomed with an old friend from Iran. He worked various jobs and drew cartoons and fantasy images in his spare time. People he knew began to recognize his talent and asked him to draw pictures of their children.

“It was the first time I was ever paid for being an artist,” Henry says.

He learned to make a good living with his artistic skills through freelance artwork and sign painting. He started his own business and built up his skill set, finding the best artists to work with to learn additional techniques such as airbrush painting, hand lettering, and eventually large-scale muraling.

Henry is well-known for his decorative painting, both in the U.S. and around the world. He brings his enormous talents and skills to each of his projects, and locals have likely seen some of his commercial work around town. He created the bridge artwork over Highway 441 at Spanish Springs in The Villages, and his artistry is also on display at the new Gateway Bank in Ocala.

“We had not been happy with the look of the outside of our bank building, which was under construction at the time,” offers Gateway Bank CEO Tom Ingram. “I thought hiring an artist might be the answer. Dale’s work is intriguing and explosive because he captures the essence of his subjects. Needless to say, we liked what we saw.” 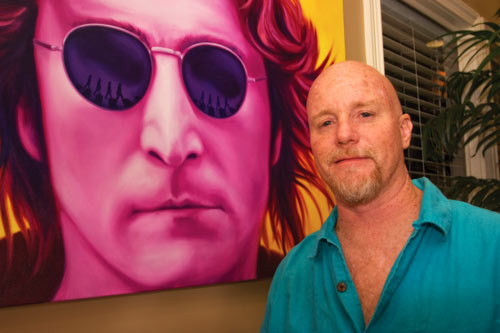 These days, Dale alternates between commercial work and fine art. Sometimes he’s able to combine the two. He recently completed a Sistine Chapel-type painting on a domed ceiling in a Lake County estate home. For nearly two months, he painted on scaffolds and ladders with his arm extended above his head, and although he stopped frequently to rest, he could only work a few hours a day before becoming stiff. From the experience, Henry can truly say he appreciates what the original Renaissance artists had to deal with.

A bit of a Renaissance man himself, Henry not only paints but also writes screenplays and even helped build his own home last year. He admits he’s happiest, though, when he’s working on his fine art.

But Henry has an even more straightforward explanation of his visual style.