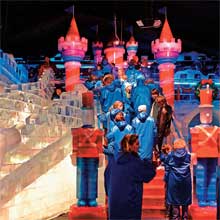 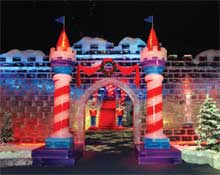 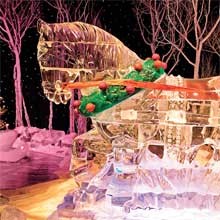 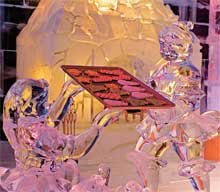 Using a staggering two million pounds of ice, each holiday season, the Gaylord Palms is transformed into a chilly winter wonderland. Santa’s Workshop, lazy polar bears, a Nativity scene, and a crystalline forest with a working waterfall are just a few of the beautiful exhibits — all carved out of ice. Frozen within these sculptures are lights that create a magical glow from deep within the ice.

I’m from the Midwest, so the thought of a holiday display surrounded by ice didn’t faze me one bit. As a matter of fact, I didn’t even bring a jacket! Of course, this turned out to be a mistake.

The “Florida Fridge,” as it’s referred, is actually an 18,000 square foot temporary structure that’s put in place just for this event. It’s believed to be the only structure like it in North America. More than 5,000 blocks of ice (each weighing a hefty 370 pounds) were hand-carved by teams of artisans from China. The artists are from the City of Harbin Tourism and Development Commission, where an annual ice festival draws onlookers to the capital city of Heilongjiang Province.

After my husband and I picked up our tickets, we were directed through a set of heavy double doors. Once inside, although not freezing yet, there was a noticeable temperature change. The closer we got to the actual exhibit, the faster the temperature dropped. I was beginning to think I was going to leave this exhibit with a nasty cold when I noticed my saving grace — a sign that read “parka pick-up.” Before entering ICE, each visitor is given a floor-length, heavily insulated, blue parka. It was somewhat funny to watch us all trying on our newly acquired coats, which everyone accepted with a look of gratitude and a heart-felt thank you.

Walking through the last hallway before the exhibit, I readied my pen and paper to take copious notes as we explored the sculptures. This proved pointless as I quickly discovered that ballpoint pens don’t work when the temperature is a frigid nine degrees Fahrenheit. That’s right, nine degrees! I felt bad for those people on vacation who were wearing shorts and flip-flops. I wondered how long it would take for their toes to thaw out.

Santa’s Workshop is the first room we encountered, and it was amazing. Intricately carved toys sat next to their real-life counterparts to highlight some of the great detail that went into each one. There were sandcastles, model cars, and stuffed animals. Lots of elves busily worked to complete even more toys. Mr. and Mrs. Claus sat nearby in their kitchen, resting in front of a crackling fireplace. The ice was so carefully carved that you could clearly see Santa’s wide smile.

Andy and I could hear shouts of laughter coming from the next room, so we headed that way to explore. We discovered a huge castle with three ice slides. The red-nosed people zooming down the slides, eyes watering, looked like they couldn’t care less about the cold. They were having a great time!

“I feel like I’m ten years old again living in New Jersey,” says Paul Macorn, a Clearwater resident who was visiting the exhibit with his wife and two small daughters. “It’s downright cold in here. The kids are loving this, too. They’ve been down the slide three times.”

Children and adults alike sprinted up the red-carpeted steps to the slippery slides and took turns racing down. After watching a few rounds, we couldn’t resist the temptation and took our own turn on the slides. It’s amazing how fast you move on actual ice — there’s carpet at the end though, and that provided for a pretty abrupt stop! It’s also amazing how fast the cold can go right through you. Sitting down on the ice, it felt like my body temperature automatically dropped as uncontrollable chills set in.

As we continued our trek through the icy halls, we came across my favorite part of the exhibit — the tranquil ice forest. It featured a horse-drawn sleigh (carved out of ice, of course), ice skating bears, and a real waterfall that cascaded down an ice mountain. An abundance of photo opportunities are strategically placed throughout the exhibit, but be warned, some cameras can’t withstand the cold weather. Disposable cameras, along with cold-weather necessities like socks, hats, gloves, and scarves are available for purchase from a vending machine just before entering ICE.

As I was beginning to think that my fingertips couldn’t take the cold anymore, we entered the last room of the exhibit. The room showcased beautiful sculptures that could easily pass for delicate panels of stained glass. In what could only be described as a cathedral, an angel rested comfortably amid a colorful backdrop. The life-sized nativity scene in the center of the exhibit was carved out of crystal-clear ice and was completely mesmerizing.

Walking at a leisurely pace, we finished the exhibit in about 35 minutes. Guests are more than welcome to double-back and take a second look — if they can stand the cold!

As we exited ICE, there was a large table set up with dozens of boxes of Kleenex tissues. We were also each given a coupon for a complimentary hot chocolate in the Gaylord Palms atrium, just what we needed to warm our bodies from the inside out. As we walked back to the car, the feeling began to return to our toes and fingers. While many rave about Florida’s year-round warm weather, sometimes, especially around the holidays, I need a touch of winter.

And that’s just what the ICE exhibit provided, a 30-minute escape to the frigid North Pole, frozen toes and all.