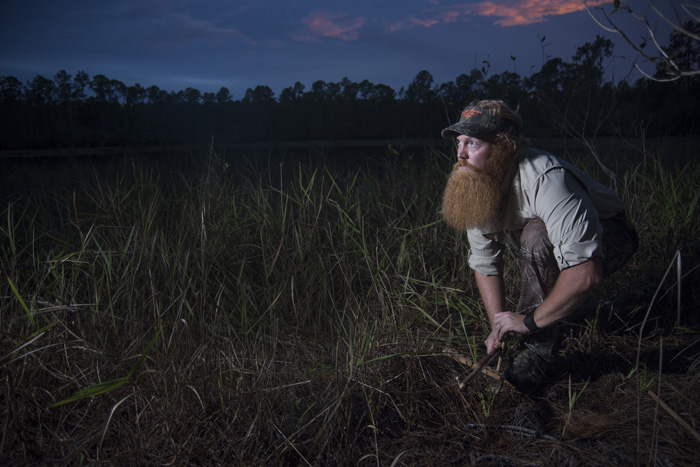 There’s nothing scarier than the unknown.

Sating that fear is at the core of survival training. So in a world that can appear increasingly volatile, plus a Florida climate that through hurricane or flooding could turn inhospitable overnight, survival training can make a lot of the unknown known.

Many people are simply intimidated by the idea of survival training. But Steven Claytor, a survivalist who runs the North Florida Survival School in Ocala, cools that concern.

“Many people think they can’t spend a weekend out in the wilderness in a tent—much less build their own shelter, start their own fire using nothing but sticks or eat edible wilderness plants,” he says. “But if you have the physical strength to do some light hiking, I guarantee that you can complete my course.”

In other words, once students get over the fear of the unfamiliar, confidence follows.

“What most people fear is the unknown of the wilderness. They assume there will be snakes and spiders everywhere and bears constantly tramping through their campsite,” Claytor says with a smile. “There are plenty of dangers in the wilderness, but by using some common sense and caution, you can easily avoid the dangers of the terrain, wildlife and insects.”

So no, survivalist living doesn’t mean you have to let your beard grow long or build a fortress tucked in abandoned woods like in Doomsday Preppers. In fact, much of survival training can be accomplished with some straightforward, sober preparation. 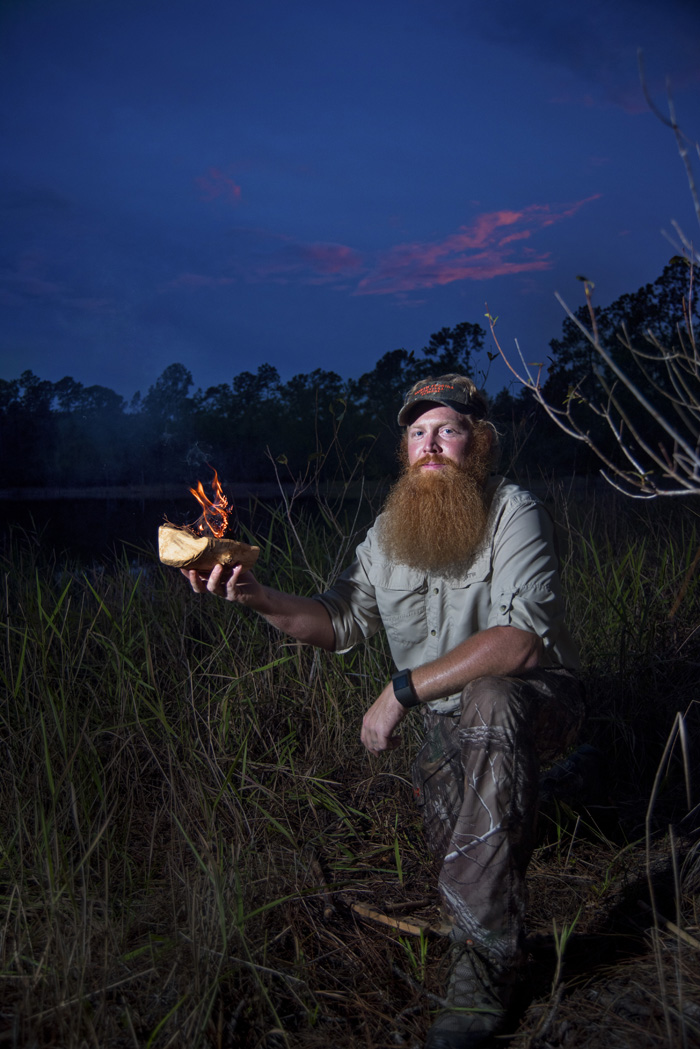 That’s where the North Florida Survival School helps. Claytor has been teaching primitive wilderness survival and doing prepping consultations for three years, following a lifetime of passion for the subject. He trained in Arizona under veteran survivalist instructor Cody Lundin, best known as a host of the Discovery Channel show Dual Survival.

Claytor’s school offers two main classes for students. The Weekend Warrior course is held in the Ocala National Forest over a weekend. Maximum class size is six students, with a cost of $250 per student (family/group discounts are available). The weekend covers a number of basic survival strategies, including building a shelter, making a fire, identifying edible plants, finding and purifying water, and signaling for rescue.

For the weekend, students need a gear bag, which can be compiled on their own or purchased ready-made from the school. The class teaches students how to survive in the wild on the strength of virtually nothing but their own wits.

“This course builds confidence and independence,” Claytor says. “It’s a must for any hunter, hiker or camper and is a great way to give your Boy or Girl Scout some serious, real-life experience.”

Claytor has helped scores of people become Weekend Warriors and has seen firsthand the changes in his students.

“I guarantee once you’ve completed this course, you’ll be a different person,” he says. “Once you tell your friends you’ve completed it, they’ll look at you with a new level of respect. And they will also want that same confidence and self-reliance they’re seeing in you.”

A cornerstone of Claytor’s teachings, and the most important component of outdoor survival, is limiting your exposure to the elements.

“Most people die from their bodies getting either too hot or too cold,” Claytor says. “Here in Florida, the heat and humidity are a more constant threat to survival. A hat providing shade, long-sleeve clothing that provides breathability and lots of water and shade during the hottest part of the day are all great ways to keep hyperthermia at bay.”

Claytor also runs an Advanced Survival course that extends beyond his starter class in both skill set and duration. Advanced Survival is a weeklong instructional that takes the lessons Claytor offers and forces students to put them to use.

For the first four days, the group learns survival skills at base camp in the woods. Over the last three days, students leave base camp (and their survival gear) behind and survive off the land with Claytor.

“This course is not for those lacking in courage,” Claytor says. “We will be eating bugs, snakes, native plants and whatever else we can find.”

The good news is that upon completing the course, there is virtually nothing a student will be unprepared to tackle in the wild. Specific challenges to meet include building a shelter out of natural materials, making a fire with primitive tools (sticks), finding edible plants and wildlife, preparing and cooking plants and wildlife, finding and purifying water, signaling for a rescue, trapping and weaving. Claytor also guides students through the challenges of thermoregulation (staying warm or cool enough) and mental survival.

“My goal is to not just teach people things that will help them in a bad situation but also encourage them to share this information with their friends, family and loved ones,” Claytor says. “I want to teach as many people as I can to be self-sufficient so they will never have to depend on their government, neighbors or anyone else. It’s just all part of being a responsible adult.”

The Advanced Survival course holds a maximum of six students and costs $950, with group discounts available.

In the area of emergency/disaster circumstances centering on your home, Claytor offers preparedness consultations. No mere book instruction, Claytor comes to your home for a personal powwow regarding your family’s emergency preparations, plans, stores and equipment. If you have too much or too little of an item, Claytor will let you know. By the end of the consultation, there’s a clear list provided for homeowners regarding what’s needed and where to purchase it.

“One thing you don’t want to do is rely on a pre-made emergency bag you might find at a retail store,” Claytor says. “They will let you down with cheap gear that you may not even be familiar with. When it comes to your life, your survival, you need to know what’s in your bag and how to use it.”

Claytor believes the worst thing we can do in these turbulent times is ignore the basic skills necessary to keep ourselves safe in crisis.

“Too often, folks stick their heads in the sand or think they can learn what they need by just watching shows on TV,” he says. “There is nothing better than actually having one-on-one education, where someone can answer any question that pops into your head. 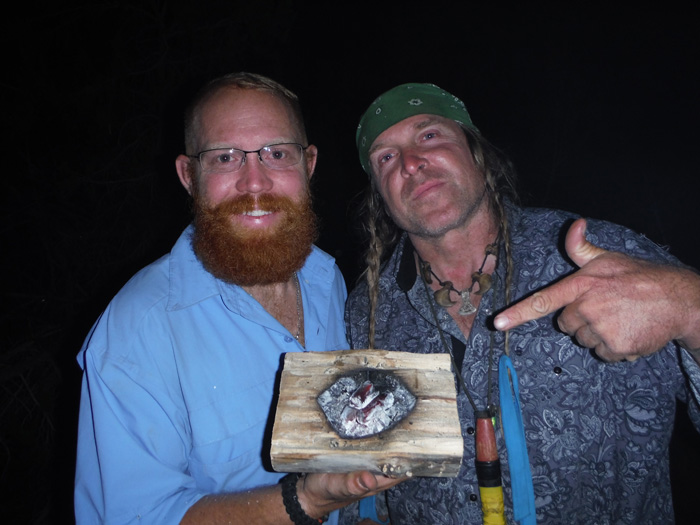 “Plus, practicing with someone there who knows what they’re doing makes a huge difference. You can talk about it or even plan and make preparations on your own, but without an experienced professional, you never know where you might be going wrong or what you might be missing.”

As Claytor says, having basic survival skills is part of responsible adulthood. And he’s proud to be able to lead a growing group of Floridians toward self-sufficiency and grace under pressure.

“Many of the lessons I teach can apply not only to practical and wilderness survival but also to everyday life,” he says. “Water purification applies when lost in the woods, after a hurricane or flood, or even in a country that may not have the safest water. An emergency bag that you keep in your car can help you in the case of an accident, can help someone stranded on the road or can be grabbed if you decide to take a spontaneous hike.”

It might not be enough to make you laugh in the face of a crisis, but having survival training under your belt means there’s nothing you can’t take on.

Every family is going to have different needs, but there are a few basics that overlap:

Food: You need both canned and dried. Steve like’s beans and rice for beginners, along with some freeze-dried veggies. And don’t forget you’ll need a way to cook it if the gas and/or power are out.

Water: Between 2-4 water cooler-sized jugs are the minimum.

Shelter: Keep a few large tarps. They can be used to make an improvised shelter, or to put over a leaking area of a roof or window after a storm.

Light: Have a few good flashlights around the house and a small box of good candles. Twice a year, when you move the clocks forward or back, change the flashlight batteries.

Hygiene: This is often overlooked. You’ll need water and possibly personal wipes. The easiest way to get sick quick is to be unclean.

First aid: Compile your own first-aid kit; do not depend solely on a store-bought kit.

Entertainment: Having some books or games to pass the time can not only keep the kids from giving you a nervous breakdown but can greatly aid in helping them get through a tough situation. A good game brings a family together, distracts from the difficulties at hand and gives everyone a bit less fear and anxiety. And maybe keep a surprise toy or stuffed animal for the tiny ones.

The list can go on and on, but these basics could get you through at least a few days.

The two most important tools in survival are a cutting edge and a way to make fire. If you have those along with some training or skills­—or even some old-fashioned ingenuity and common sense—you can create other tools that can improve your situation. But a checklist could be different for every person.

Other than having a knife and a way to make a fire, if you take medication, always have backup medication. Similarly, if you have severe allergies to something as simple as a bee sting, make sure to have an Epipen.

A 55-gallon trash bag can be used as a poncho or to carry items, collect water, make an improvised shelter, mark your trail (by cutting into strips and tying to tree branches) and even be twisted and made into cordage.

If you’re going on a hike, take a buddy—or at least let someone know where you’re going and what time you plan to return. Make an imprint of your boot on some aluminum foil over a soft cushion, in case you get lost and the print is needed for search and rescue. And if you don’t mind the weight, take plenty of water (or a small water filtering straw—Steve loves the Sawyer Mini), enough food and a small flashlight to last a day or two.