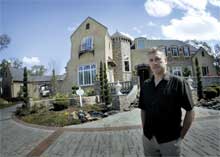 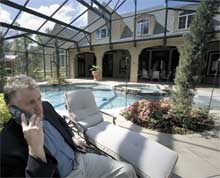 On his way to creating custom multi-million dollar homes, Lady Lake-based builder Phil Mastrosimone Jr. took a circuitous route. And surprisingly, one with a musical detour.

Mastrosimone grew up in Jamestown, New York, as the son of a builder. It seemed a given that he’d likely follow his father into the profession and carry on the family business. But a PTA meeting threw those plans slightly off key.

“I was in the fifth grade and my mother Sue and I went to a PTA meeting together,” recalls Mastrosimone, now 44. “The music department had all these instruments at the meeting that the kids could try out. I picked up a trumpet, gave it a try, and that was the beginning of my musical aspirations.”

Despite never having shown any musical inclinations prior to then, Mastrosimone proved to be a natural. He was soon performing with the school orchestra, garnering first chair all through high school. Mastrosimone split his summers between going to music camps and working with his father, Phil Sr., in the construction business. He became a talented carpenter, using his creativity on unique wood and metal trim work.

“I was still thinking I would go into the construction business once I graduated from high school,” says Mastrosimone. “My father had other ideas. He worked hard all of his life and he wanted a different life for me. He was the one who kept encouraging me to pursue a musical profession.”

The career decision became easier when Mastrosimone earned a music scholarship to the D’Angelo Department of Music at Mercyhurst College in Erie, Pennsylvania. While studying classical music, he performed with the Erie Philharmonic and Cleveland Orchestra. In 1985, he graduated with a Bachelor of Music degree in Music Performance.

“My dream was to become a studio musician,” says Mastrosimone, “and off I went to New York City. My sister Mary was working there for Jim Henson, the creator of The Muppets, so I had a place to stay. Mr. Henson even offered me a job working in the mail room. But I was determined to spend my time going to auditions.”

Five months later, Mastrosimone discovered that New York City was a tough place to get a music career started.

“You know the line about if you can make it here, you can make it anywhere?” he says. “Well, I found out how true that was. It was unbelievably tough and competitive. I decided that maybe a career in music just wasn’t going to happen for me.”

Fortunately, Mastrosimone had another profession to fall back on and returned to working for his father on a construction project in Fruitland Park. When that job was done and not wanting to go back to New York, he added a variety of other positions to his resume. He was a salesman for a phone company supply company, a greeter at Disney World’s Tomorrowland, and he worked in Disney World’s staff shop crafting fiberglass set pieces.

“It was an interesting time in my life,” says Mastrosimone. “Then I met and went to work for Dion Hundley, a contractor in Kissimmee. He became my mentor and encouraged me to start my own custom trim company.”

Mastrosimone did just that in 1993, then obtained his builder’s license in 1996 and founded Mastrosimone Construction, Inc. shortly after. A year later, he did his first million-dollar project with the custom remodeling of Rick Silanskas’ home. Mastrosimone credits Silanskas as another one of his mentors and the two are now good friends.

“After Rick’s house, the word spread and one house led to another,” says Mastrosimone. “We’re very proud of the work we do. Last year, three of our homes in the Lake County Parade of Homes got perfect scores. I was told that was the first time that had ever happened.”

The latest Mastrosimone creation is a 7,000-square foot European-styled home. The house is currently the centerpiece of the 70-acre Windsor Green development in Lady Lake. Mastrosimone is partners with Dr. Kim Etheredge of Leesburg in Windsor Green.

“With this house, I decided to really show my clients what I could do,” says Mastrosimone, who currently calls the house home with wife Rosemarie, and blended family of sons Ryan (3), Chris (17), Phillip III (17) and Mason (15).

“My wife and I go back and forth about hoping it sells and hoping it doesn’t,” says Mastrosimone. “It’s become home to us.”

For his next major construction project, Mastrosimone is venturing into an entirely new area. He and Silanskas are scheduled to go to Russia for mission work.

“We’re going to build a couple of orphanages there,” says Mastrosimone. “I’ve been very fortunate in my life. And I believe we all have to share our good fortune and give back.”