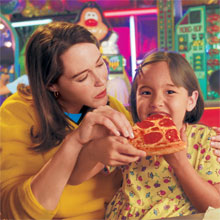 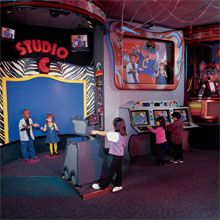 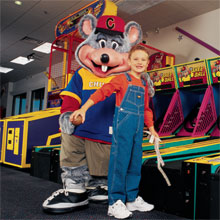 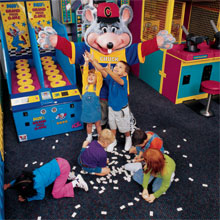 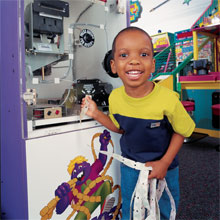 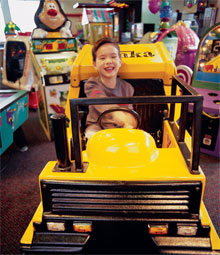 One of my favorite things to do as a child was to spend an afternoon or evening at Chuck E. Cheese with my friends and family. We moved to Ocala from Wisconsin when I was just 10 years old and that same year, the Chuck E. Cheese here in Ocala closed its doors. Needless to say, I was devastated. So, alas, I continued to grow up in Ocala, without the joy of a Chuck E. Cheese restaurant. Fortunately, kids in Ocala won’t need to suffer the way I did — a Chuck E. Cheese has recently opened in the Barnes & Noble shopping center on SR 200.

Okay, so I might be acting a tad bit melodramatic, but Chuck E. Cheese was a blast growing up. Like I said, I hadn’t been to the restaurant in 20 years, so when the new Ocala restaurant opened, I grabbed fellow co-worker Steve Codraro and headed out for some much-needed stress relief (not to mention pizza). Forget the whole mantra of “where a kid can be a kid,” Chuck E. Cheese is where an adult can be a kid!

Like many things, Chuck E. Cheese has changed over the years, but if the smiling faces and happy voices of the children and parents enjoying the facility were any indication, it’s just as much fun as it’s always been.

As Steve and I walked into the restaurant, we were greeted by a friendly employee who proceeded to stamp our hands with a black-light activated “51.” I later learned that all group members who enter the restaurant together are stamped with the same number, ensuring everyone in the group leaves together. This “Kid Check” system, as it’s called, is a wonderful safety measure for parents and children.

I first noticed that the menu has changed significantly. Of course, pizza is still the featured item, but it’s been joined by a variety of sandwiches including a grilled chicken sub ($4.99), an Italian sub ($4.99), and even a hot dog ($2.49), among others. A salad bar is offered and includes a variety of fresh vegetables and dressings.

“It’s a simple salad bar,” Steve says. “The food is definitely geared towards the children, but it’s very fresh and well-attended. An employee is always making sure the presentation is nice and the salad bar is stocked.”

A variety of Super Saver Deals are also available that include a large pizza, soft drinks, and, of course, game tokens.

For the main course, Steve and I opted for a cheese and pineapple pizza. The pizza was tasty and hit the spot after a long morning. But let’s face it, you don’t go to Chuck E. Cheese for the food. As we took our seat in one of the colorful booths that line the exterior of the play area, I finally got a chance to look around.

I was excited to see that some of my favorite games and activities were still a part of the restaurant. I think it’s safe to say that I was quite adept at Skee-Ball when I was younger (now called Rockin-Bowler).

Joe Robertson, who was visiting Chuck E. Cheese with his 6-year-old daughter and her best friend, tried his luck at Skee-Ball, a game he said he hasn’t played in 30 years.

“It’s funny,” he laughs. “Skee-Ball is much smaller than I remember. And now, I’m good at it,” he says as he hands his daughter the ten or so prize tickets he won.

Another of my favorites, air hockey, is also still around. I challenged Steve to a friendly game, but he declined. I think he was scared.

Tracy George of Ocala, who brought her 8-year-old daughter Carla (whose favorite game, by the way, is also Skee-Ball), and her two nieces to Chuck E. Cheese, remembers spending time in the restaurant as a child.

“The last time I was at a Chuck E. Cheese is when it was open in Ocala before,” she says. “Now it’s an experience I share with my daughter.”

One of Tracy’s favorite memories of the restaurant was aggravating her brother — who just happened to work as the mouse himself. That’s right! He was the man behind the Chuck E. Cheese mask. Of course, as a mother, a trip to Chuck E. Cheese is all about her daughter now.

“One thing I especially enjoy about Chuck E. Cheese is the security at the door,” she says. “To me, it means nobody can walk off with my child. For Carla, this is probably the fifth time we’ve been here since it opened. She never gets tired of it.”

And it just might take multiple trips to play all the games. Let’s see, there’s Nick Toons Racing, Blast City, Jambo Safari, Line Drive, the Star Wars Trilogy Arcade, The Simpsons Pinball Party, and Cruisin’ World, just to name a few. (If you need an explanation on any of these games, just ask your child.)

In the past, I remember an extensive Chuck E. Cheese animatronics extravaganza with Chuck E. and all his friends. The lights would dim throughout the restaurant and you would know it was time. Okay, so the show is slightly smaller now — just Chuck E. gone solo — but that’s okay, he is the star of the show after all!

Next to Chuck E., three oversized video screens correspond to what he sings. Another neat feature is the blue screen that allows kids to dance and sing while appearing on the televisions with the big mouse.

Just like in the old days, Chuck E. Cheese prize tickets are a hot commodity and can be traded for a variety of prizes. Steve and I came to the conclusion that the prizes today are far more impressive than the small plastic toys we had to choose from. With the right amount of Chuck E. Cheese tickets, kids can choose from an EZ Bake Oven, a keyboard, a Play-Doh set, or the Grand Puba of all prizes, a mini Monopoly pinball machine.

Before we knew it, Steve and I had spent over two hours exploring the restaurant and reminiscing about our childhoods. We could have stayed longer, too, except unedited stories and unscanned photographs beckoned us back the office. For the young — and the young at heart — Chuck E. Cheese is a fantastic way to relax and unwind.