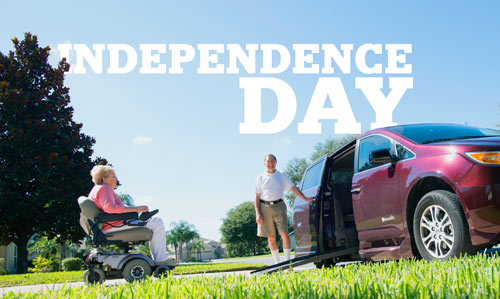 State-of-the-art vehicle modifications by an Ocala firm help the disabled regain their ability to drive.

The metal building on Sixth Street in Ocala looks industrial, but it’s where independence is restored and lives are changed. To the people who thought driving was a thing of the past or never even possible, Paul and Nancy McGuckin might seem like miracle workers.

The couple has owned and operated Advanced Vehicle Modifications in Ocala since 1997. It’s more than just a business to them, however. They describe it as part art, part science and part calling.

“I’m supposed to be doing this work,” explains Paul, who has a background in electronics. “I’ve always been good with my hands, and I know how to build a vehicle. We’re affecting people’s lives and changing their lives for the better.”

The key to their success is building a vehicle around each and every customer’s special needs. Basic vehicles designed for the disabled are usually wheelchair accessible, but Paul takes designs to much higher levels.

“Every disability is different,” says long-time AVM customer David Ashcroft. “Every vehicle has to be custom built around the person. Paul gets to know you and finds out what you need.”

Paul’s modifications are much more than attaching a wheelchair lift to a van or truck. Often, the vehicle’s floor has to be lowered to accommodate headroom when someone is seated in a wheelchair. Yet, the vehicle must still have enough clearance to go over speed bumps or railroad tracks. Other high-tech modifications include voice activation systems and electronic mobility controls that allow a driver with limited mobility to steer with as little as one finger. One customer, a war veteran, has no arms but still steers using his foot in his customized car filled with futuristic-looking electronics and a voice scan.

“Drive-by-Wire” systems sense the driver’s movements with a steering input device—such as a joystick, yoke or wheel—and those movements are converted into a digital electronic signal. The signal is transmitted to intelligent drive modules, which command electromechanical motor systems to steer the front wheels. The same method of controls can be applied to the braking and acceleration.

Often, though, it’s the simple things that can make all the difference in the world to a driver. Paul recalls an elderly lady coming in because she could not buy gas. The arthritis in her hands would not allow her to reach in and turn the gas cap. He “invented” a special device that would help her loosen the cap.

“Just seeing the looks on people’s faces when we finish the work is very exciting,” says Paul. “We give them the ability to live independently again.”

Safety is the No. 1 concern for Paul, who has earned credentials and accreditations from the National Mobility Dealers Association’s Quality Assurance Program. In 2011, Paul was only the 20th person in the United States and the second in Florida to earn the Seating and Mobility Specialist designation. Association members also must adhere to the safety standards of the National Highway Traffic Safety Administration.

“The fact we’re doing this in Ocala surprises most people,” he says. “But unless you need it [modifications for a disability], you never see it.”

When talking about safety, Paul points out that his customers are among the safest on the road.

“The disabled are more cautious. They lost the ability to drive and gained it back,” he says. “They respect the privilege of driving more than anyone else on the road.”

Paul and Nancy, as well as their team of long-time employees, have created an environment where customers are treated like family. The high-tech and state-of-the-art systems bring in customers, but it’s Paul’s winning smile and empathy that keep them returning.

“How can I have a bad day when I work with people who have to go through all this just to be able to drive or ride comfortably?” Paul asks. “We don’t think of it as selling but rather problem solving. 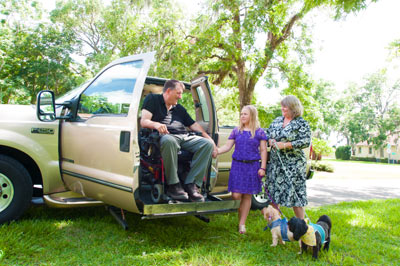 Brent Griffin says growing up on a farm helped him learn to deal with challenges. His upbeat tone of voice also signals that he is an optimist. He matter-of-factly describes the day in 1996 when he was building a sun shelter for his horses at his farm in Webster when the unthinkable happened.

“I only fell 7 feet, but it was just the way I fell,” he remembers. “I was in the hospital for nearly three months, but I was lucky. I had a good job with insurance and great co-workers who even collected money to pay my mortgage.”

A spinal cord injury left him as an incomplete quadriplegic and wheelchair bound at age 26. He has limited mobility in his left arm.

“The accident wasn’t a bad thing because I ended up back in Ocala, where I met my wife, Tammy,” he says. “We have been married 13 years and have a daughter, now 10.”

He also met Paul McGuckin right after moving to Ocala in 1998. He went looking for a customized van but saw Paul working on a pickup truck when he arrived at AVM. For a former farm boy, the truck just seemed to be the right fit.

“With a diesel truck, you can get 500,000 miles,” Brent said of his decision to go with a Ford 250. “More importantly, with diesel, you can run the air conditioner for as long as you want. If I had a flat tire, I could keep running the air until AAA arrived.”

He says that the truck lets him come and go as he pleases.

“When you don’t have a car, you are always relying on someone to pick you up or wait for you,” he says. “A vehicle truly gives you independence.”

Modifications to Brent’s truck included dropping the floor by 4 inches to accommodate his 6-foot-2-inch height. A remote control opens the doors and brings out the lift. A lock bolts down his wheelchair, and he has hand controls for the gas and brakes.

“It’s amazing what Paul does over there,” Brent, now 42, says. “I’m still driving the same truck, and I consider Paul a friend. He got in the business for the right reasons… to do something to give people their independence back.”

A former jockey, David Ashcroft did not let his injury keep him from traveling and even pulling a modified fifth-wheel camper that accommodated his wheelchair. Paul McGuckin has built several customized vehicles for him over the past 20 years, including his current Ford 250 truck.

After David broke his neck in a 1981 horse race in South Florida, he found there weren’t many options for vehicles for quadriplegics.

“I was tired of vans, so when I met Paul I told him he was going to build me a truck,” he remembers. “Paul puzzled over it and then did it.”

David believes that truck was the first one in North America to be handicapped accessible.

“We were on the cutting edge,” he says with a laugh.

David, wife Lisa and their two children traveled out West in that truck and even pulled a fifth-wheel camper equipped with a wheelchair lift installed by Paul. Now that the children are grown, they don’t camp any more.

“Driving was the easy part,” he remembers. “Getting set up after you arrived could be a challenge, but today, it’s much easier than it used to be.”

He’s also driven to Chicago and New York, putting about 150,000 miles on his previous modified vehicles. Today, he uses mechanical hand controls with power assist. Braces hold his hands in place so that he can maneuver the reduced-effort steering and braking controls.

“Even before this newer technology, Paul’s work was amazing,” says David, who owns Ashcroft Properties. “It’s given me a ton of independence; most places I can go by myself. I’d be miserable if not for Paul.”

As director of communications and marketing for United Way of North Central Florida, Kim Faenza must have reliable transportation. And that transportation must be handicapped accessible for this young mother who has spinal muscular atrophy, a genetic form of muscular dystrophy.

“Driving equals independence for me,” says Kim. “Without that ability, I wouldn’t be able to work like I do.”

She jokingly describes the modifications on her 2012 Honda Odyssey as the “Ferrari” package. “It has everything I need,” she says. “This is my first vehicle that has been fully modified from start to finish.”

Kim found AVM more than 15 years ago when she was looking for a certified dealer after moving to Gainesville from Ohio. She had gone to others in Orlando and Jacksonville, but Paul’s credentials and reputation brought her to Ocala.

“There is a lot of trust that goes into working with someone who modifies your vehicle,” she explains. “It’s very high tech, and they must know what they are doing. Paul and his team have all the certifications.”

Paul is still adding some modifications to the brand-new van, and that requires coordinating schedules with her husband, Claudio. On the days when he can’t drive her to work, she must get a handicapped accessible taxi. And that, she says, can be very expensive.

“With this modified van, I can go wherever I need to go,” she says. “My life is much more meaningful because I can be independent.”

Al Wunsch has a different perspective on the AVM modifications to his new Honda van—that of caregiver. Suzanne, his wife of 51 years, has MS and is confined to a wheelchair. She doesn’t drive, but Al must be able to get her in and out of the vehicle with ease.

“We originally had a Ford Expedition with a lift arrangement that included a sling,” he describes. “The lift had become difficult, and she hated that sling.”

The Expedition was followed by a 2008 Toyota van with a ramp, which was more comfortable for Suzanne. The new van he bought from Paul in May, though, has really made a difference for both of them.

“Now she doesn’t mind going somewhere,” he says. “It has an easy-lock system for the wheelchair. The technology has changed a lot in the last five years, making it much easier and safer for the caregiver, too.”

Al has been an AVM customer since 2003, and it’s not only his automotive vehicles that Paul has modified. He built a platform for the couple’s golf cart so that Suzanne could enjoy riding in it as well.

“Paul has helped me out on a lot of different things,” says Al. “His modifications have had a major impact on our lives. We can get around to places like the bank and doctors’ appointments, and Suzanne even goes bowling with the MS Club.”