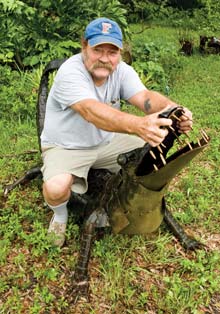 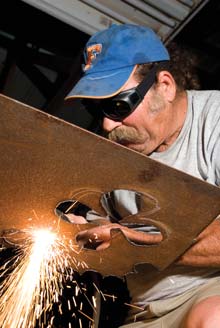 Astride his life-sized steel alligator, metal artist Ralph Waters will tell you that this is as close to alligator wrestling as he cares to get. The retired 63-year-old welder and longtime Sparr resident creates an eclectic assortment of metal sculptures, ranging from simple flower boxes and candle holders to medieval knights and African tribal figures.

“It’s an obsession,” Ralph says of his art. “I don’t want to waste my talent.”

The walls, shelves, and workbenches in the tiny cluttered workshop abound with Ralph’s metal sculptures. Much of his work, some of which has been exhibited over the years at various area art shows and at local galleries, including Brick City and CFCC, will probably be given away to family and friends.

“I’ve not been successful monetarily,” he says of his hobby. “But I’ve always had people give me a pat on the back.”

Ralph’s creative side got little nourishment as a child. There was, he says, absolutely no encouragement from his father, who was also a welder.

Although frustrated, Ralph followed a practical course. He says the image of becoming a starving artist led him to pursue a career in construction, first working in South Florida, then The Villages. In 1970, he decided to establish both his home and general repair and fabrication business in Sparr. His work centered mainly on the horse industry, making stall doors, gates, and horse feeders.

A number of years ago, a medical disability finally forced him to retire and turn his business over to his son, Sean. The move had one positive aspect—it freed Ralph up to be creative when, as he puts it, “the creative spirit moves him.”

Most of his work has a mythological and historical inclination. But when it comes to subject matter, Ralph’s not above jumping around.

“Whatever inspires me,” he says. “Often I see something in the metal before I start. Sometimes I just like to build ‘blank.’” 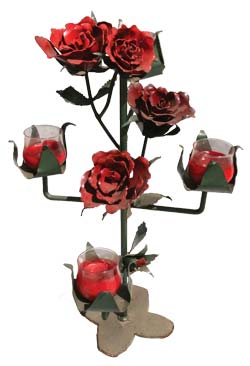 For the moment, that “blank” is flower boxes and floral candleholders. Ralph outlines the flower pedals in chalk on a sheet of 10-gauge metal, then dons a pair of welder’s goggles and cuts them out with a Plasma cutting torch. Using a hammer and anvil, he bends each pedal into shape, rubs them smooth with a wire brush, then spot-welds them on steel round stock or pencil rods. He then spray paints the finished product with the appropriate colors.

His miniature Zulu warriors are also fashioned from scrap metal. He uses a gold leaf paint to outline the edges.

“This gives them a look of brass,” Ralph explains. “In reality, they’re painted.”

As for the gator, Ralph says he saw the shape in a piece of eight-inch diameter curved steel pipe.

“I split the bottom of it and opened it up,” he says, adding that most of his artistic ideas come from pieces and shapes of scrap pipe, left over from shop jobs or scrounged from scrap piles.

For years, Ralph has drawn roadside interest in his work. Beneath the rusting, vine-covered “Iron Works” sign outside his business, boxed in by storage sheds that his son sells, he displays a life-sized metal horse and a centaur. There is also a winged dragon, a sea serpent, and a Zulu warrior hidden in the garden.

Ralph’s not sure where he inherited his creativity but he refuses to ignore it. “We are called to use our talents,” he says. “It’s something I love doing.”