How many times have you been compared to a parent? You’ve got your “father’s height” or your “mother’s eyes.” And who hasn’t scrutinized a new baby, searching for that one obvious characteristic that is “mommy’s” or “daddy’s.” The science of genetics is an ever-evolving field that has fascinated both scientists and everyday individuals alike for centuries. Traits like tongue-rolling or eye color are fun to trace back through the generations.

But today’s technology has taken us miles beyond mere ear wiggling. Genetic testing has opened up a world of answers… and a world of questions.

Perhaps you recall endlessly plotting traits on Punnett squares during your Genetics 101 class. Thanks to the original geneticist Gregor Mendel and his famous pea plants, we learned that traits are passed on genetically rather than being a product of environment.

Here’s a quick refresher. A very basic example is hair color. One gene is responsible for the color of your hair. Each gene is comprised of two alleles, one inherited from your mother and one from your father. When those two alleles combine to form your hair color gene, one is expressed (dominant) while one is not (recessive). So, a blonde mother and dark-haired father would not produce a child with light brown hair. Rather, only one of those two alleles would be expressed.

It can become quite complicated when you begin to factor in different traits, but in laymen’s terms, this is basically how it works.

And this is true for many observable characteristics such as hairline, dimples and freckles. Other traits, such as attached earlobes, left- or right-handedness, hair texture and tongue-rolling, were once thought to be the product of a single gene, but more recent research has lead geneticists to believe a number of inter-related genes may be involved.

Single-gene traits are just the bare bones of understanding how genetics works. As with most fields of science, advancements in technology quickly led to a greater understanding of which traits might have been passed on from Grandma and Grandpa.

“Tests for single-gene disorders have been around a while, and there are thousands of them,” explains Diana Moglia-Tully, a certified genetic counselor and manager of the Clinical Genetic Counseling Service at Ocala Health.

Single-gene disorders are the result of a single mutated gene. In some cases, just one copy of a muted gene is necessary for a disease to develop, while in other cases, a child would need both copies of the muted gene, one from mom and one from dad, to exhibit the characteristics of a particular disease.

There are approximately 4,000 single-gene disorders that geneticists know of, and that number grows almost daily.

“As more genes are discovered, so are more diseases and more tests,” says Diana.

It Takes Two… or Two Hundred

Single-gene disorders would lead you to believe that identifying the risk of disease development was easy. However, that’s anything but true.

“There is no simple answer,” says Diana in regard to inherited diseases. She explains that although it’s true that cancers are indeed the result of gene mutations, there are many factors that come into play when you look at such complex conditions.

“Cancer is something people think is always hereditary, and some can be, but there are a number of factors to consider,” says Diana. For example, she points out that sometimes cancer is the product of the environment. A perfectly healthy individual with no family history of cancer can develop the disease based solely on exposure to toxins or cancer-causing agents.

At other times, a person could have a family history of cancer and even have the genetic make-up that leaves them vulnerable to cancer, yet never actually develop the disease.

So what do you look for if you think cancer may be a genetic trait? Diana says, “look for anything that makes you go ‘hmm’.” For example, if a person continuously develops new cancers, they may carry a gene that leaves them susceptible. If an individual develops cancer at a very young age, it may be due to genetics.” 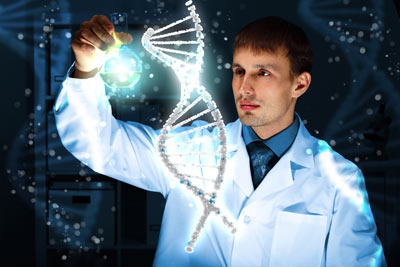 Have you ever been told “you’ve got your mother’s temper” or “your father was a clean-freak, too?” Psychological conditions like depression and obsessive-compulsive disorder are what Diana calls “multi-factorial.”

“There is cross-over between genes and environmental factors,” she says. Yet determining the cause of a specific psychological condition is extremely complex.

“You may inherit a tendency toward depression, but your environment may dictate whether or not you actually become depressed,” she says, noting that there isn’t a clear-cut answer.

The same is true for conditions like obesity and various eating disorders; however, research is just in the beginning stages.

“There are genes that are currently linked to obesity, but there are so many that can play a role,” says Diana. She adds that the specific genes for hunger and satiety and how they affect the brain are very complex and that a person’s environment also plays a role in one’s eating habits.

“It’s proven that obese parents are more likely to have obese children, but is it because of genetics or because of food choices? There just isn’t a clear answer yet,” she says.

To Test Or Not To Test

If the answer to the likelihood of developing a disease were clear-cut, the question of whether to undergo genetic testing would be simple. However, Diana explains that genetic testing is a complex process that not everyone is a candidate for.

“Everyone looks at things differently. Some want to know their risk, and some don’t,” she says. She explains that although genetics is an exciting and ever-evolving field, sometimes even the experts are overwhelmed by the constantly changing information.

“Even testers don’t fully understand what genes mean all of the time,” she says.

“We can now test a whole panel of genes involved in a specific cancer, but determining how many and which ones to put on that panel is a difficult decision,” she says.

Deciding whether to undergo testing is a personal decision with many factors to consider. Furthermore, understanding those test results can be a daunting experience. This is where Diana’s role as a genetic counselor comes into play.

“We are the translators between doctors and patients,” says Diana. She explains that as the field of genetics has evolved and the complexity and availability of tests has grown, the role of the genetic counselor has expanded.

“It’s a very psychological and emotional experience for the patients,” she says. Genetic counselors are not long-term counselors; rather they usually meet with a patient just a handful of times. Diana refers to this process as “going on the whole journey” with them.

The first step is a consultation.

“We evaluate a family history to decide which tests may be appropriate and who in the family should be tested,” says Diana. She explains that the family history’s “puzzle pieces” can help determine if certain cancers along the lines were more likely due to genetic mutations or products of the environment.

The second step is patient education. Diana explains that the answers aren’t always black and white, and counselors will help patients understand just what “positive” and “negative” results mean.

Finally, the counselors discuss the treatment options or lifestyle adjustments available. Diana notes that counselors are not physicians, but patients often have so many questions that doctors simply don’t have the time to answer each one.

“I’ve had patients ask what they could do with their three dogs while undergoing treatment because these are the kinds of questions they think about,” says Diana. By the way, she helped the patient find dog walkers.

Physical characteristics, personality traits and even diseases and disorders can often be traced back through the generations. As technology evolves, there’s no telling what our genes will uncover for us. For some, the need to know is all-important, while for others, personal and ethical reasons keep them from seeking out certain tests. There is no clear-cut answer as to who should or shouldn’t be tested, but for now, there are a few steps people can take if they are considering genetic testing.

Pay attention to early-onset or recurring diseases; these may be genetic.

Talk to a counselor before you make any testing decisions.

Single-gene disorders can be:


Examples of single-gene disorders include: