The small, chocolate-brown stallion eyes the visitors from a distance, more disinterested than wary. But the two mahogany-colored, pony-sized mares trot eagerly across the pasture to say hello. They gently nudge the guests with their soft muzzles, hoping for a treat and shamelessly accepting all the petting they can get. Once living wild on an uninhabited North Carolina barrier island, these Shackleford horses have adapted quite well to domestication on this Dunnellon farm.

“While they really are ponies in size, the Shacklefords aren’t obstinate like most ponies can be,” says Bob Cubbage, a freelance photographer and retired audio engineer who owns the 40-acre Cubbage Patch farm. “Actually, if I can mix up the species, they’re more like a dog when it comes to temperament. They bond well with people and are very willing to please. They’re just a joy to be around.”

Four years ago, Cubbage had never even heard of Shackleford horses. Now he owns six and serves on the Foundation for Shackleford Horses’ board of directors.

Cubbage and his friend, Jan Cross, were visiting friends and family in Beaufort, which is just off the coast of North Carolina, when Cross, a former racehorse jockey and currently a teacher at Dunnellon High School, spotted the horses.

“I was standing out on the second-story deck, looking out to the Outer Banks islands,” recalls Cross. “I saw these ponies on the shoreline. I got really excited and asked about them. When we were told they were called Shackleford horses and were descendants of the Spanish explorers’ horses, we just had to find out more about them.”

As it turned out, there were some Shackleford horses at a nearby farm that were up for adoption. Cubbage, who grew up on a New Jersey farm and had ridden horses as a youngster, went along to see the horses out of curiosity.

“When we got to the farm, there was a young girl leading this little pony out of the barn,” remembers Cubbage, an imposing figure at 6-foot-4-inches. “The girl turned the pony loose in the corral. The pony took one look at me, turned around, and went back in the barn. I figured the pony had never seen anyone as big as me.”

Still curious, Cubbage walked into the corral and soon the pony came back out of the barn.

“This time, she walked right up to me, nuzzled me, and then dropped to the ground and rolled over on her back like a dog,” he says, smiling at the memory. “I had never seen a pony do something like that. Well, next thing I know, I’m adopting her. Then, of course, I had to adopt another one so she’d have a companion.”

That first pony was actually a six-month-old filly who Cubbage named Serena and who has since grown into a beautiful red bay mare. Her companion was “Hugo,” a young chocolate-brown stallion. The Shackleford herd at Cubbage Patch now also includes “B’Ophelia,” “Deckne,” “Smooth,” and “Paladin,” all born on Shackleford Banks. Hugo has also become a father, siring “Prissy,” whose mother is an adopted Utah mustang named “Piper,” and “Springsteen,” whose mother is a rescued Welsh pony named “Marie.”

The farm is also home to Cross’ retired Thoroughbred, a Rocky Mountain Horse, a Quarter Horse, a second adopted mustang, a brahma, a zebu, and three dogs. Obviously animal lovers, Cubbage and Cross have also become great advocates for the Shackleford horses.

“These horses have survived on the Outer Banks islands since the 16th century,” says Cross. “Their ancestors came from Spain and were the horses Columbus brought with him. Those first Spanish explorers came ashore off the coast of North Carolina with those horses. The people left or died, but the horses stayed. They are the mustangs of the east.”

Today there are approximately 110–130 horses on Shackleford Banks, a nine-mile-long island east of Morehead City and Beaufort. Part of Cape Lookout National Seashore, Shackleford Banks is accessible only by boat. As they have for hundreds of years, the horses roam the island’s meadows, dunes, and marshes. Many are born on the beaches during low tide, and only hours later, the newborn foals and their mothers swim across the narrow channels back to the main island. When they are not near fresh water, they go to the shore and dig holes, drinking the water that seeps in.

In July 1998, then-President Bill Clinton signed into law the Shackleford Banks Wild Horse Protection Act. The Foundation for Shackleford Horses, on which Cubbage serves as a board member, co-manages the Shackleford Banks herd with the National Park Service. Three times a year, several horses ranging from six months to two years old are removed from the herd and brought to two holding farms in Beaufort. There they get checked out by a veterinarian and are socialized for two to three months before being offered for adoption.

“Despite being born in the wild, the Shacklefords adapt very well to people,” says Cubbage. “They make wonderful pets.”

Cross plans to promote the Shacklefords as hunter/jumper ponies for children. To that end, she’s broken Paladin to saddle and will use him as the poster pony for the effort.

“Shacklefords are very tractable and very smart,” says Cross. “They learn quickly and are very athletic. I think they’ll make great riding horses. Once someone meets a Shackleford, they fall in love with them.”

Want to See Them?
Check out the Shackleford horse during the Parade of Breeds on April 19 at the Florida Horse Park. Visit flhorsepark.com for more information. 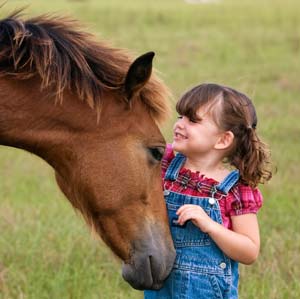 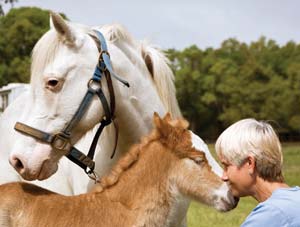