It’s a… seaplane? Yes, if you’re traveling through the quaint downtown streets of Tavares and happen to glance up, you might catch a glimpse of a seaplane dipping through the clouds before making a splash landing on Lake Dora. At least that’s what city leaders are hoping for with this $8.4 million marina makeover.

Shielding the sun from their eyes, the people relaxing on the shores of Lake Dora in Tavares look up to the sky, watching with curiosity as a pilot lines up his small plane for final approach. The engines buzz as the plane begins to descend. A nearby windsock indicates that there is a stiff breeze and at the last second the pilot pulls up, aborting his landing. After circling around for a few minutes, the pilot lines up once again, and this time he goes for it. As he lands on the runway a massive splash of water rises into the air. No, this isn’t your typical airplane.

“There’s just something about the adventure, romance, and pioneering spirit of a seaplane,” says Tavares City Administrator John Drury. “Everything all-American is wrapped up in them. I don’t care who you are, when you see a seaplane splashing in it sends chills up your spine.” 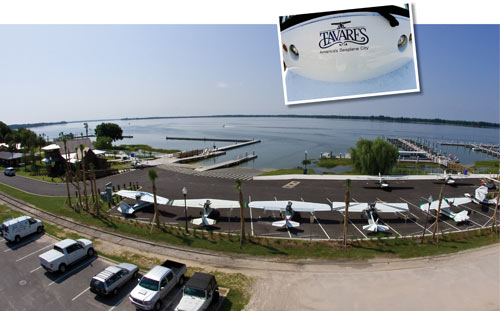 The Tavares Seaplane Base from the rooftop of nearby restaurant, Al’s Landing.

While you may have never witnessed the flight of a seaplane personally, their popularity dates back decades. In fact, the first manned seaplane flight took place in Paris in 1905. Did you know that after Alaska and Minnesota, Florida is home to more registered seaplanes than any other state? Tavares’ city officials did, and they took advantage of that fact by building and opening one of the country’s newest airports—the Tavares Seaplane Base.

“Seaplanes have a long history here in Tavares and Lake County,” says Drury. “The first documented flight off the shores of Tavares was in 1914.”

Drury adds that Clara Adams, a passenger on that very first flight, went on to become known as “the maiden of maiden voyages.”

“She flew on the Hindenburg’s maiden flight to the U.S. and she was the first [woman passenger] to fly around the world,” says Drury. “She was on every inaugural flight she could get on and she made sure The New York Times knew about it.”

Clara Adams had a dream that someday Americans would use airplanes as an everyday means of travel. Well, it appears that some dreams really do come true.

For residents and lawmakers of Tavares, their dream was to enliven their tiny town and find an identity for the city of Tavares. Mission accomplished. The new slogan, “Tavares: America’s Seaplane City,” is already showing up on signs, T-shirts, and official letterhead.

“In order to create something special for the people of Tavares to be proud of, we wanted to create a niche-and-wow success,” says John. “Seaplanes are both niche and wow.” 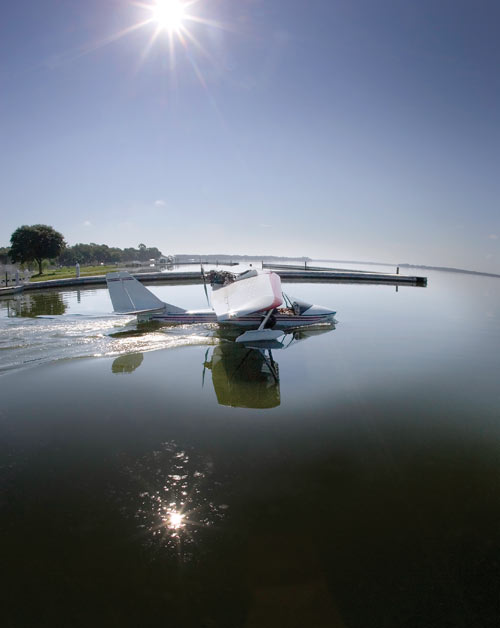 Three years and $8.4 million—that’s how long city officials have been working on bringing the seaplane base and marina to life and how much it cost to make it a success.

“From bidding to design to construction it took three years and three days to get to the grand opening,” Drury says. “It’s been a long time coming.”

Designers and city planners have created a base that has “seaplaners” throughout the region raving.

“The buzz has been created and we’re seeing more and more planes splashing in,” says Bill Neron, Tavares’ economic development director. “It really is a sight to see.”

And what’s not to be excited about? A virtual runway approved by both the Florida Department of Transportation and the Federal Aviation Administration ensures boater and pilot safety. Special docks have been installed to secure the parked planes. Seaplane ramps allow pilots to pull their planes quickly and effortlessly from the water to transfer them to a different location, and then there’s the fuel.

“The fuel is huge,” says Drury. “A plane or boat can pull up, pay at the pump, refuel, and be on their way without the hassle of leaving the water.”

“This is a great set-up here,” agrees SeaRey plane owner Bob Toerner. “A bunch of us seaplaners are on the Gator frequency on the radios and talk to one another. Before long a bunch of us are splashing in and meeting for a quick lunch. We call it the $100 hamburger.”

According to Neron, that’s just the kind of response the city was hoping for. The project, he adds, includes three distinct areas, including the marina, a special events area, and Wooton Park. And that’s just the beginning. With the surge in interest in the downtown area, restaurants and other businesses have been popping up one after another.

“The business community is really responding to the marina,” says Neron. “Several years ago Main Street was far more vacant. Three years later, we have 22 businesses and seven new restaurants and they’ve come to us in the midst of an awful economy.”

One of the highlights is Progressive Aerodyne, a seaplane manufacturing company that promises to bring high-paying jobs to the area. Another new company, Jones Brother Aviation, will offer seaplane tours as well as flight training for seaplane pilot certification.

“We’re seeing more and more interest in the downtown Tavares area. Who knows? Maybe the future will include scenic seaplane tours and air charter service to the Keys and the islands,” says Drury. “Tavares is on the map.”

Drury is clearly excited by the transformation Tavares has undergone, but he’s also excited about the thought of climbing aboard another seaplane one day.

“My first ride was in 1986 in Tampa off Davis Island,” he recalls. “I was flying on a low-wing amphibious. We were coming in for a landing and hit full power, water splashing up everywhere like a speed boat. I looked out of the window and water was at head level. It was amazing. Before I knew it we were turning from a submarine into a boat. It’s quite an experience. I still get chills thinking about it.

“Yeah, I think I’ll be working towards getting my seaplane license,” Drury adds with a smile. “I’ve been bitten by the bug.” 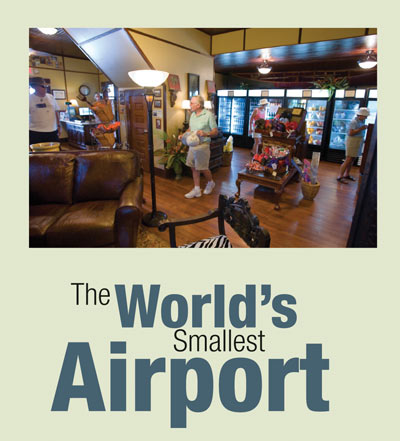 At just 1,500 square feet, the Tavares Seaplane Marina’s airport is roughly the size of a small three bedroom house. Affectionately referred to as the Ship’s Store or the Prop Shop, the building is a replica of the old Captain Melton Haynes home, the Woodlea House. The original home was destroyed by arson not long ago.

Although small with just three full-time employees and three part-time marina technicians, the Tavares terminal operates much like a larger airport and includes a virtual 1,500-foot runaway for seaplanes landing on and taking off from Lake Dora. The runway is approved by both the FAA and the FDOT. The terminal building also serves as the marina’s communications hub. A computer terminal supplies pilots with the latest weather data and flight plan information and the store also sells aviation and marine fuel—not to mention memorabilia, candy bars, snacks, and beverages.