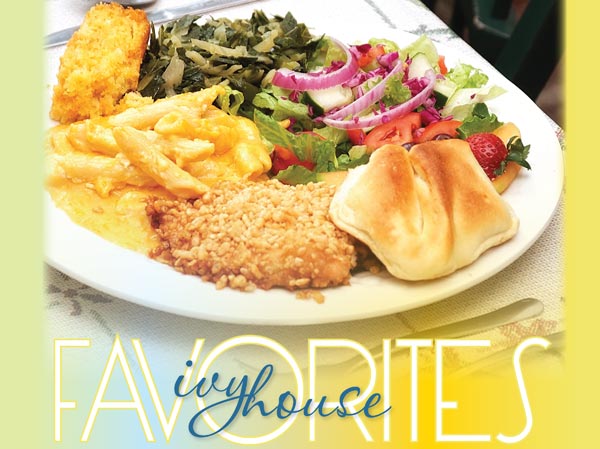 Dip chicken in the melted butter; then roll in crushed Rice Krispies. Bake in a shallow baking pan at 325–350 degrees for 20–25 minutes or until golden brown.

“My sister Dot, a counselor/teacher in Pensacola, gave me this recipe,” says Mimi about her signature dish. “My sister hated to cook, but this was so simple—and good—that she couldn’t resist. This has become an Ivy House favorite and is requested for many special occasions.”

Boil noodles as directed on package; rinse and drain. Cook a little al dente. Pour into a 9×13 sprayed baking dish. Mix eggs, flour, and milk together; add the cheeses and pour over noodles. The milk should almost cover the noodles. Add a little more, if necessary. Cut butter into small pieces and dot the top. Bake 45 minutes at 325 degrees.

Wash greens at least 3 to 5 times, according to how clean they are. Cook collard greens and ham in water with salt and pepper for at least one hour, or until tender. (Cooking time depends on the age of the greens when they were picked.) Add a little more water if needed to keep greens covered while cooking. This also makes a good pot liquor. Add chopped cabbage and boil gently for another 20 minutes. Serve hot with buttermilk cornbread, baked golden brown in a black skillet with lots of butter spread on top.

“My mama cooked fresh mustard greens the same way, but used sliced white bacon instead of ham hocks,” says Mimi. “After they were done, instead of adding cabbage, she mixed some of the pot liquor with plain meal and dropped it by the spoonfuls into the gently boiling greens to make dumplings.” 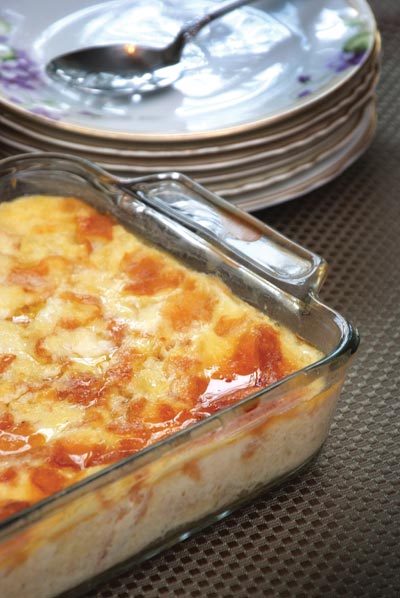 Toss together bread crumbs and pineapple and place in a casserole baking dish. Combine eggs, sugar, and butter and pour over pineapple mixture. Bake uncovered at 350 degrees for 30 minutes.

“This dish is especially delicious with ham,” notes Mimi. “For convenience, the casserole can be assembled and refrigerated overnight before baking.” 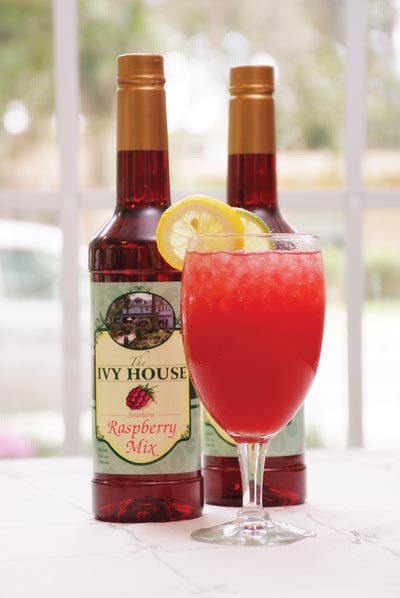 Bring water to a boil and add tea bags. Remove from heat and allow to steep approximately 30 minutes (longer will not adversely affect the brew). Remove the bags and add the remaining four ingredients. Stir until well mixed and sugar is dissolved. Adjust sugar to your taste. Makes close to one gallon.

“This recipe was created by my firstborn and is a signature drink in our restaurant,” says Mimi. “No one can make it like my Ann.” 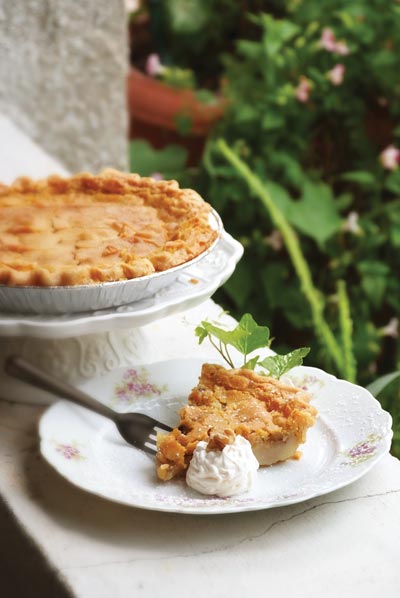 Cream butter, sugar, and vanilla together. Add eggs, flour, and salt. Beat well. Sprinkle chopped walnuts on bottom of crust. Fold in buttermilk and pour mixture into crust. Bake at 300 degrees for 30–35 minutes or until set. 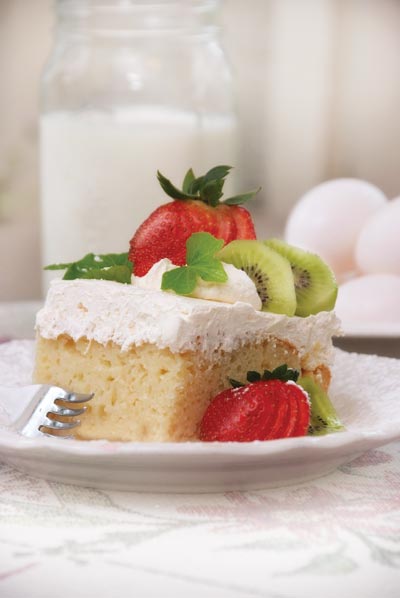 Mix and bake cake as directed on package in a 9×13 pan. When you remove from the oven, poke holes in warm cake. Mix the two milks and pour over the warm cake. Allow to cool in the refrigerator for at least 2–3 hours.Spread the Cool Whip over the cake and sprinkle coconut over the top. This cake may be garnished with slice strawberries, blueberries, kiwi, or any other favorite fruit.

In print: Gracefully Southern features 237 pages of down-home recipes that have made The Ivy House a must-visit restaurant. $30. 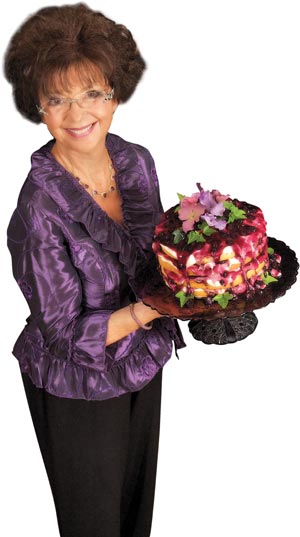 Consistently named by several statewide magazines as one of “The Best Places To Eat In Florida,” The Ivy House has earned its high reputation thanks to memorable home cooking, friendly service, and a cozy atmosphere.

Founded in 1993 by Marjorie Hale, The Ivy House is owned by Mimi (as she’s known by family and friends) and her daughters, Ann, Myra, Evelyn, and Waica, all of whom are active in day-to-day operations, along with several granddaughters. Patrons know they can rely on the restaurant to dish up the kind of meals they once enjoyed for Sunday suppers at Grandma’s house. Those same patrons will be elated to discover Mimi has at long last corralled many of her favorite family recipes into a stunning cookbook, aptly titled Gracefully Southern.

Actually, customers have been begging for just such a collection for years, and the finished project is well worth the wait. You’ll want to set aside a couple of hours and find a comfy chair to page through this appealing book, which includes family stories and photos, tidbits, and history, in addition to a substantial array of tasty recipes.

Now that the cookbook is out, Mimi and her daughters aren’t worried their popular establishment will be any less busy. You may be able to whip up their famous Milk Cake and Baked Krispy Chicken at home now, but sometimes we all just need to be pampered and let someone else do the cooking. When the urge strikes, you’ll still know exactly where to go.