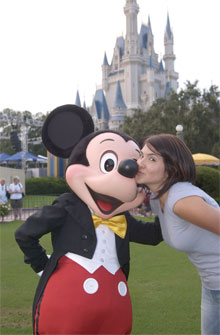 That’s what started my recent phone interview with the talented young singer from her Brentwood, Tennessee, home near Nashville. She said her yard offers plenty of room for the ever-growing little guy to run around. Jaci and husband Darren Potuck have enjoyed spending time together in their scenic country home since exchanging vows last September.

But it’s a break that won’t last long.

With a recent CD, Unspoken, still receiving lots of airplay and a new one, Beauty Has Grace, due in stores November 9, Jaci is also scheduled to begin an extensive fall tour, including a September 11 stop at Night of Joy, Disney World’s annual Christian mega-event.

Over a leisurely conversation, Jaci revealed a sharp wit, an uncanny knack for impersonations, and a strong commitment to her ministry of music. It was a very natural exchange.


How many times have you performed at Night of Joy?

A lot. I don’t know why they keep having me back! (laughs) I would think that they’d be like, “OK, no more Jaci Velasquez.”

As you start rehearsals for Night of Joy, is there a new song you’re really looking forward to playing live for the first time?

A song called “Tonight.” It’s really cool to see what people think of the new songs.

But quite a test.

Yeah, and scary. Writing a record is kind of like putting all your kids in a beauty pageant and watching people judge them to decide which one’s the prettiest. Or if they’re pretty at all. It’s a bit unnerving, but a brilliant feeling when the fans know every word.

Is there a “classic” Jaci Velasquez song that you really enjoy performing, even after all these years?

Yes, there’s one I’ll probably always perform: “On My Knees.”

Thank you. Even to this day, people still know that song and always request it.

Well, it was a huge Christian radio hit…

I know. I can’t believe that. You’d think that they’d be like (mimics a corporate-sounding voice), “OK, that’s enough Jaci Velasquez, that’s enough of ‘On My Knees.’ I think we need to move on.” (laughs) Honestly, it makes me feel very blessed. Even though I’ve been doing this for 10 years, it still feels like I’m a new artist.

I’ve listened to plenty of your music and I must say one of the things I like best about your career path so far is that my favorite songs — “Center of Your Love,” “On My Knees,” “Adore,” and “Every Time I Fall” — are so different from each other. You’re hard to categorize.

I appreciate that. That’s probably been the one thing that’s kept my career going. When you go against the flow, you can achieve and really surprise people.

When most artists come up, they’re competing against everyone else, but after a string of hits and achievements you end up just competing with yourself. You have to keep it interesting.

You’re right. People start saying (affects a Valley Girl accent), “This is so not like the second record!” (laughs) You know what I mean?

Good accent, by the way.

As a Christian artist, have you ever been subjected to any really strong pressure to have a mainstream crossover radio hit? Stacie Orrico [“More to Life”] has to be feeling that right now.

Honestly, it’s really hard on her and I think she gets a little frustrated. I will say, I did get pressured early in my career and for some reason I never did it. But there are times when I’d wished I’d had, because in the Christian market, there’s only so far you go and then you hit a plateau. And you can only go down from there.
Ultimately, I didn’t want to do a mainstream record because you hear the horror stories of people saying (again with a Valley Girl accent), “Did you hear she did a mainstream record? We’re never going to buy her CDs again!”

Sure. “Baby Baby” by Amy Grant has to be the classic example of that. I mean it’s been 12, 13 years later, and she still gets questions about that choice.

It’s such a crock. I feel like we waste our time as Christians on the things that really don’t matter. For me, the songs I’m writing are a bit about stretching ourselves as Christians and challenging us to look beyond what we see.

Yeah, I noticed on Unspoken that you wrote a lot of the material. Some songs dealt with some very personal issues.

Oh, yeah. It was like one big therapy session!

At least you get a CD contract out of the deal.

I know. I don’t have to pay a psychiatrist. I just get to write songs.

I was actually listening to your last CD when you called and I noticed in the liner notes that the title cut was written by U.S. Sen. Orrin Hatch. Have you met him yet?

He’s a very cool guy. I sang at the White House three times during Former President Bush’s time in office — I think. (pauses) Was it three? Yeah, it was three times.

Well, that’s saying something when you can lose track of how many times you’ve sung at the White House.

I know! (laughs) It’s totally awesome. When I was a little girl, I told my mom that one day I was going to sing at the White House before I was thirteen. I actually sang there for the first time when I was 12, so I beat my goal by one year. I’m scheduled to sing at the Republican National Convention in New York next month.

I know, even though it is political and I’ve never been political at all. Ever, ever, ever.

Well, for most Christian artists, it makes sense to be involved with Republican causes. It’s not like you’re going to be some political activist or protester or something. Do you know what song you’re going to do?

One of the Spanish/Christian songs because I know he’s looking for the Latin vote. So, I’m going to sing and hopefully get those Latinos back into the Republican Party.

Is your mom going to tape it?

I’m sure! She’s good at that sort of stuff.

You started in the industry very young, signing your first record deal at 14. What’s it been like literally growing up in front of all your fans around the world?

It’s a beautiful thing, but it’s also kind of weird.


It has to beautiful when it comes to the music because they relate to it in such a positive way. But your fans can’t extend that into your life.

They feel they really know you and have a right to judge your life, like you’re theirs. But overall I feel really blessed, like I’m living a Cinderella story.

As far as your music goes, for people not familiar with Christian music, how would you compare your sound? Is there someone in the secular market you admire?

I’d say my records are like morphing Celine Dion, Gloria Estefan, and probably Jonatha Brooke. If you put those three together, you’d get the sound of my records and what I’m like as an artist. Now, with this new record…

Vocally, it’s reminiscent of… (asks husband in background a question) Christine Dente from Out of the Grey and Shea Seger and a little bit of Norah Jones. That’s actually my true singing style. I’ve always done the big ballads, but I’ve had to work really hard to do them because my range is really small.

Then you’re choosing your material well, because I wouldn’t have described your singing that way at all.

I mean, Amy Grant has a small range and everyone knows that.

Right. But for this new record, put together the weirdness and the drum sounds of the Flaming Lips, pull in the programming style of the Cardigans, and possibly the upright piano of Coldplay.

So there’s a chance at some crossover potential with this one?

There’s really nothing like this in the secular or Christian markets, so it could totally flop. Critics will probably love it. We’ll just have to see if the fans really like it, too.

Back to Disney World. It has to be a great place to play, but the sets for Night of Joy are a little shorter. How do you prepare for that?

It’s actually a bit easier because the pressure’s not on just you. It’s very relaxed. Where it gets tough is the night before, during sound check. Disney World is wonderful about keeping the magic alive and not letting people see what it takes to put on some massive show, so we’re all working our rear ends off at 3 or 4am. One year, the artist before me went over their sound check by, like, three hours. By then, the band and I were asleep on the floors of our dressing rooms, and at 5am they came to get us. It was crazy! But the show itself went off without a hitch.

Is there camaraderie with the other acts?

You don’t see anyone — it’s such a bummer! The only time I’ve ever seen other artists is when I do an autograph session the day before. You really just end up hanging out with family. And isn’t that what Disney World is all about?

Performances will take place at several stage locations between 7:30pm and 12:30am with popular attractions also available each evening. Advance tickets are $36.95-$79.95 and one-day tickets on event days — if available — are $41.95. The event has been sold out in advance in recent years. Guests can get tickets or more information by calling 407-W-DISNEY or by visiting disneyworld.com. Schedule highlights: