Cory Pool is a man of many accomplishments. At just 34, he is the vice president and chief financial officer of the Jenkins Auto Group, president of the Humane Society of Marion County, and president of the Ocala/Marion County Domestic Violence Center, not to mention that he serves on the board of trustees for Central Florida Community College and was recently reappointed to a two-year term on the City of Ocala Community Development Advisory Committee. How’s that for keeping busy?

“I’ve been very fortunate with living and working here,” Cory explains. “Being involved is my way of giving back.”

No matter which board or committee Cory serves on, he gives every effort 100 percent of his focus and attention. 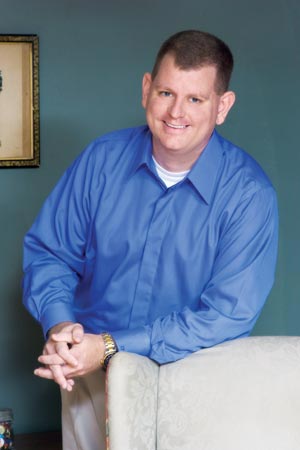 “I feel very strongly about all the committees I sit on,” he says. “Abuse victims and animals can’t really speak for themselves, so it’s up to us to be a voice for them.

“Unfortunately we’re finding that as the stresses of unemployment and bills take their toll on people, our 68-bed facility is filling up,” Cory adds about the domestic violence shelter. “We operate 24 hours a day, 365 days a year and offer victims not only a safe shelter, but also case management, counseling, job training, and tutoring programs for both the women and children.”

Unlike the domestic violence center, which receives federal, state, and local grants to operate, the Humane Society of Marion County’s over $900,000 annual budget is raised through donations alone. Cory served as treasurer for the no-kill shelter before being elected president.

“A number of years ago, the Humane Society had some well-known financial problems and a lack of vision,” he says. “The executive director and Board of Directors have managed to turn this facility around, adopting out more than 1,500 animals last year and operating in the black.” Cory himself is an animal lover and the proud owner of two horses.

“Lucy, my three-year-old mini is a princess and doesn’t have to do anything but play, but I like to get out there and ride my eight-year-old Quarter Horse, Onyx.”

Appointed by Governor Crist to serve on the District Board of Trustees of Central Florida Community College, Cory, along with six other individuals, oversees the college’s role in the community, including how dollars are spent.

“I’m a firm believer in the benefits of a community college,” Cory says. “The college interacts with many different agencies and serves as an integral part of our community.”

He plays a similar role with the City of Ocala Community Development Advisory Committee. As Chairman of a five-member board appointed by the city council, Cory and his fellow board members determine how best to spend federal grant money that flows into our community.

It’s no wonder that with all Cory does to make Ocala a positive place to work and live, he has no intention of leaving. As a matter of fact, he’s surrounded by family and friends in Ocala.

“I’ll admit I was one of those people that wanted to leave Ocala as soon as possible after school,” he says. “But my advice to anyone would be to give Ocala a chance. We have a vibrant community that’s a great place to live and raise a family. I love to travel and visit places all over the world, but coming back home to Ocala always gives me a great sense of contentment.

Cory adds that no matter what your age, setting goals for yourself is critical.

“It gives you something to strive for,” he says. “I have a plan for the next 30 years.”