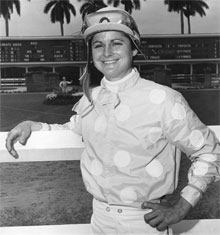 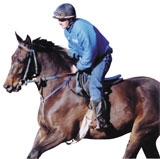 Ocala Style recently caught up with Thoroughbred racing’s first winning female jockey. Her breakthrough career established many firsts and netted almost $6 million. Now out of racing, but raising a family and running a training farm in Citra, her life hasn’t slowed down at all.

Then and now, Mary Russ Tortora says she was just in the right place at the right time.

Mary still blushes when her riding feats are mentioned to her. “I was just in the right place at the right time,” she says. But also very competitive, she describes those years as “better than her best.”

She spent the summer of 1982 with her soon-to-be husband Rick Tortora and trainer Roger Laurin on the New York circuit. “It was a great experience,” she recalls. “I got to ride at Aqueduct, Belmont and Saratoga.”

After riding from 1980 to early 1986, and now Mary Russ Tortora, she took time off to start a family. Three children, including one set of twins later, she returned to riding.

It was as though she’d never been gone. Her first comeback win was on Boots ‘n Buck in the 1993 Fast Hilarious Handicap at Gulfstream Park. It was a good year that included nine stakes wins and $1.4 million in earnings, both career bests. But it ended badly with a spill and an injured shoulder.

“I still thought I’d come back and ride,” says Mary, “but my daughter had been at the races that day and saw when I fell. It bothered her to see her mother get hurt and she asked me not to go back. I didn’t.”

Her totals for seven years worth of riding: 520 wins, 25 stakes wins, three graded stakes wins, and $5.9 million in earnings.

As consummate a mother as she was a jockey, it wasn’t a difficult decision for Mary to make. And it wasn’t as though there wouldn’t be horses in her life. Having married Rick Tortora, son of trainer Manny Tortora, she was involved with a family whose business was Thoroughbreds. A partnership — Manny and Jackie Tortora, Steve and Beverly Tortora, and Rick and Mary — established Equitor Farm in 1989 just outside of Ocala in Citra. Steve and Rick co-manage the commercial boarding and training operation.

Now 50, Mary Russ Tortora has the best of all worlds. She’s up at 4:30am at the training barn and galloping horses an hour later. When the galloping is done, there’s usually a couple to swim, then there are other assorted barn chores before lunch. Afternoons are usually filled with household duties and the kids’ activities.

The twins, Barbara and Richard, are 17 now, while younger brother Justin is 14. Barbara is a Florida High School Rodeo Association state champion; she went to the national finals last year and made it to the final round in barrel racing, pole bending, and goat tying. Richard and Justin are both on their school wrestling teams. Justin has started galloping and has dreams of becoming a jockey.

For the Tortora family, there’s always a rodeo or a wrestling match to go to. There aren’t very many trips to the racetrack, but they watch a lot of TVG.

After dinner, it’s back to the barn for night haying and watering. It’s usually 10 o’clock by the time things have settled down.

“The days go by very quickly,” says Mary, “but I wouldn’t change a thing about my life.”

There’s one other asterisk in the Mary Russ Tortora story. In 2003, she was inducted into the Calder Race Course Hall of Fame, joining previous inductee Manny Tortora. They are likely the first and only father-in-law and daughter-in-law tandem Hall of Fame inductees.

“I’ve been very blessed,” Mary concludes. “I’ve had a great career as a jockey and I have a great family. I couldn’t ask for anything more.”