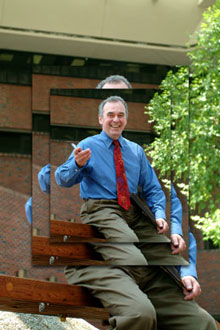 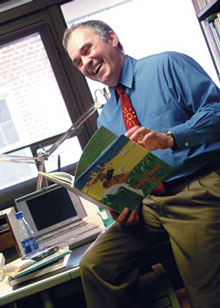 John Cech spends at least part of every day in the world of childhood. He thinks about things that many adults tend to overlook or forget: from the old mainstays of growing up like Gumby, yo-yos, and kazoos, to the bright new things commanding the attention of children today like the Baby Einstein recordings, video games, and the latest Harry Potter movie. He scrupulously researches the latest candy, tests this year’s crop of toys, pours over stacks of picture and comic books, and interviews those who are making exciting theater, music, and art for children. He talks to people from all walks of life about their favorite children’s books and why these works mattered so much to them. In short, he takes the things of childhood very seriously.

It’s all in a day’s work for John Cech (pronounced “check”), the host and producer of Recess! , a three-minute radio program that airs weekdays on WUFT-FM out of Gainesville and is made available to public radio stations throughout the country. Recess! examines the cultures of childhood, past and present, in our backyards and across the world. On June 30, the program aired its 1,000th show.

Recess! is designed for adults, to inform them about the complex, dynamic cultures that affect children: “What they’re hearing and what they’re seeing,” says Cech, Professor of English at the University of Florida and director of its Center for Children’s Literature and Culture.

Recess! is meant to evoke childhood for adults, from the lighthearted sounds of children playing at the beginning of the show, to the familiar sound of a ringing school recess bell that signals the end of each three-minute segment.

One show this spring explored the history of hopscotch. Another revisited the intricacies of the game of marbles. Some segments revealed the childhood memories of today’s artists, from The Highwaymen to Anna Moo. One of the back-to-school segments that aired this summer offered a glimpse into how young people learned to write 5,000 years ago.

While the spirit of Recess! is upbeat and engaging, Cech has serious reasons for producing the show, now completing its fourth year on the air. He believes that through the program he can be an advocate for children and their concerns in our culture. Connecting through the radio program with adults who make decisions about children’s lives is one way of doing that.

“I felt very strongly from the beginning that this program was needed,” he says. “It asks adults to think about childhood for three minutes every day and, hopefully, to reflect on how at least some parts of childhood remain with us throughout our lives.”

Recess! grew out of a series of radio segments on children’s culture that Cech had done in the 1980s for National Public Radio’s All Things Considered. When he became director of the University of Florida’s Center for Children’s Literature and Culture five years ago, he felt it was important that the center have a special project. So, four years ago, Recess was born.

“It was a labor of love,” he explains, “because of our commitment to children in the Center, and as part of the long-term goals of the University of Florida, which has made children and families one of its priorities.”

Cech’s wife Eve is also a producer for the program; and a number of other experts from the university, the Gainesville community, and around the country provide their voices and ideas for the show. In a nod to their own childhoods, the biographical sketches of Cech and his cohort of contributors feature a current photograph as well as a childhood one on the Recess! Web site, www.recess.ufl.edu

Today, the show is offered via satellite uplink to almost 500 public radio stations across the country and airs regularly from Jacksonville to Alaska, Mobile to Duluth, San Francisco to Georgia, Pensacola to most of the state of Montana, to name just a few of its listening areas.

To gather ideas, Cech talks to teachers, librarians, parents and, of course, children; he scours the children’s book and music sections of bookstores when he travels, and he sifts through dozens of magazines, journals, and newspapers every month. He is an author himself, having written children’s books and plays; a novel for adults; many articles for leading national publications like The Washington Post’s Book World, The Christian Science Monitor, USA Today, and The New York Times Book Review; and a number of scholarly books, including one about Maurice Sendak, author of Where the Wild Things Are.

Cech’s children’s books include My Grandmother’s Journey and Django, two titles available at area public libraries (see sidebar). My Grandmother’s Journey is a story based on the extraordinary life of Cech’s mother-in-law, who was born in pre-Revolutionary Russia, survived the Russian Revolution, Stalin’s purges, and Nazi imprisonment before taking the final step of her journey to America.

Cech frequently shares his knowledge and enthusiasm for children’s literature with audiences in the area. He visited Ocala last spring, meeting with teachers and students at the Madison Street Academy of Visual and Performing Arts and presenting workshops for them on the creative writing process. He also provided a program one evening for the Parent-Teacher Organization on some of the latest and best books for children — from a children’s history of rock and roll to a collection of stories and poems for young people that reflected on the tragic events of September 11th.

That night, Cech, dressed in a dark sport coat, a striped tie and brown shirt, looked at first like your average dapper professor. But one glimpse into his dancing eyes revealed a man who himself hadn’t lost the wonder and excitement of childhood, especially when he offered the youngsters in the audience some tips on writing.

“If you want to be a writer,” he told them, “you’ve got to be curious about everything, right down to wanting to know who painted this room, and what’s the color puce, and where the butterflies go in the winter.”

Perhaps above all, Cech is an indefatigable spokesman for the creative potential that resides in all children. That’s one reason he is bringing to Gainesville next spring an exhibit of photographs by Jacques-Henri Lartigue, a French photographer who took remarkable pictures as a boy in the early 1900s. He would like to change the thinking, among both children and adults, that just because “you’re a kid” you can’t do “really wonderful work.”

“There is that spark in every single child,” Cech continues. “That’s the challenge we have as parents, as adults, as society — to find that incandescence, to help nurture it.”

And what about that kazoo?

Cech celebrated this unusual instrument last January on National Kazoo Day. The kazoo originated in Africa, he recalled, “where it was made from a cow’s horn with a thin, vibrating membrane made from egg shells of spiders covering the hole. It was used to disguise the human voice in storytelling and rituals.”

And the yo-yo? It was used as a hunting device in the Philippines.

Recess! touches on the familiar and the unique aspects of childhood and is meant to give adults a pause, a kind of recess for a few minutes during their busy lives.

“We hope the programs will reach people in ways that invite them to let their thoughts and memories linger, for just three minutes every day, on the lasting importance of childhood.”

Lynn Peithman Stock is a freelance writer and desktop publisher who has lived in Ocala for 11 years. She has a bachelor’s degree in journalism from the University of North Carolina-Chapel Hill.