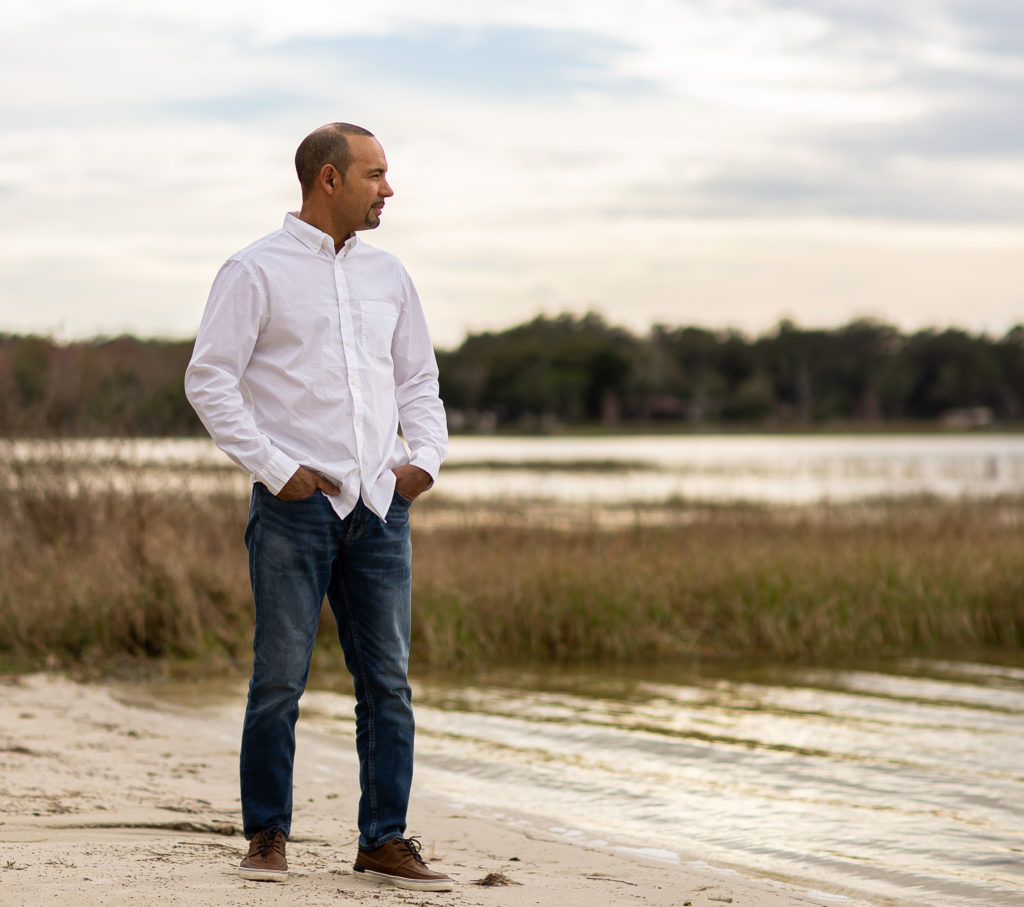 Rudy Perez’s American dream began 30 years ago when he was a teenager in Cuba. His path to a better life—built with his own two hands—started with a harrowing journey across the ocean.

As many struggled to find hope during a global pandemic last year, Ocalan Rudy Perez reached the pinnacle of his American dream: in February, he and his fiancée purchased and renovated their own home. In September, they celebrated his birthday with a fun-filled weekend getaway to Clearwater Beach. In November, Perez proudly voted for the first time in his life. Later that month, he married the woman of his dreams in a beautiful outdoor ceremony attended by family and friends. The year ended on a high note: a relaxing vacation with his new wife and his 13-year-old son in the Great Smoky Mountains.

Perez doesn’t take those milestones for granted; the happiness he’s found in life at age 49 is immeasurably more than he dared imagine growing up as the son of a single mother in impoverished communist Cuba.

When his best friend asked Perez to help him build a raft to emigrate to the United States, his answer was “no way.”

“That’s crazy,” the 20-year-old Perez told his lifelong buddy, Alejandro Torres. Sure, he shared the desire for a future that included the basic necessities they lacked, such as more than one set of clothes and shoes and enough food to eat. And, like most young men, he longed for a career path that would lead to owning his own car and eventually his own home, with the means to raise a family of his own. But Cuba, in those early days of its Special Period, was no place for a young person’s hope. After the collapse of the Soviet Union in 1991, the northern Caribbean island nation no longer received exported Soviet food and oil. Groceries were scarce and power outages became the rule rather than the exception. Their close-knit families and communities were the only thing sustaining the spirits of the resilient Cuban people. And Perez had no intentions of leaving his mother and his family. 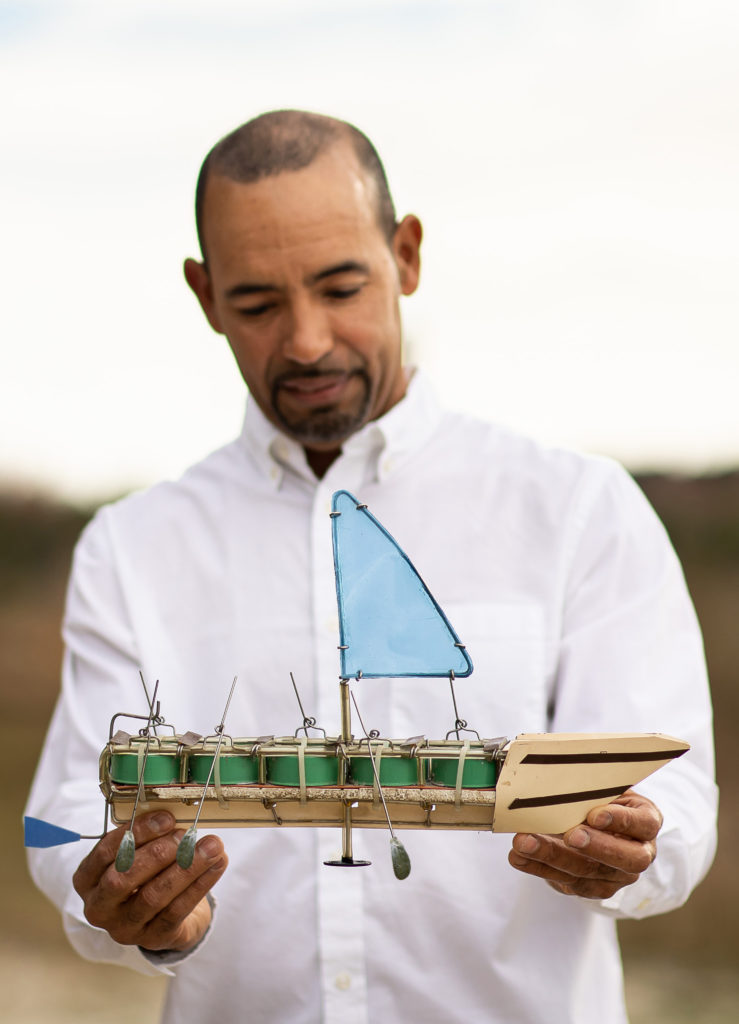 But when his friend began the illegal process of constructing a raft in his parents’ home just a few doors down from the house where Perez lived with his mother, he knew that even though he wouldn’t be going along, he couldn’t say no to his best friend’s request for help.

“He said, ‘I can’t do this without you,’” Perez remembers.

It was risky; just building a raft was illegal, and there was no way they could complete it without stolen parts.

“If they catch you, you’re going behind bars for a long time,” Perez explains. But, he admits, “we did a lot of crazy stuff just to survive. We stole stuff to eat…because we had no choice.”

Over the next year, as he spent less time reporting for his mandatory Army duty and more time helping his friend secretly build an illegal raft in his family home, Perez began to realize Torres was right. There was no future for him in his homeland. He pushed the heartbreaking thought of leaving his mom to the back of his mind, focusing his inventive brain on engineering and constructing a seaworthy raft made of salvaged and stolen water pipes, refrigerator insulation and tractor-trailer inner tubes, which would carry seven men safely across the Straits of Florida to freedom.

When their departure day finally arrived, Perez was so nervous he could hardly eat when he sat down for dinner. He and Torres had successfully constructed their raft in secret and recruited five other men to join them—not an easy thing to keep quiet in their tight-knit neighborhood. Perez hated lying to his mother but he didn’t want her to worry. He was famished after working nonstop since dawn, but could hardly gulp down a bite.

“I’ve got to go; I’ll be right back,” he told his mom, jumping up and grabbing his book bag, which held the few items he would take on his journey to a new life. He waited to say “I love you” until he turned toward the door so she wouldn’t see his tears. He knew his devoutly traditional mother would never condone his illegal activity and it would break her heart if she knew he was leaving. 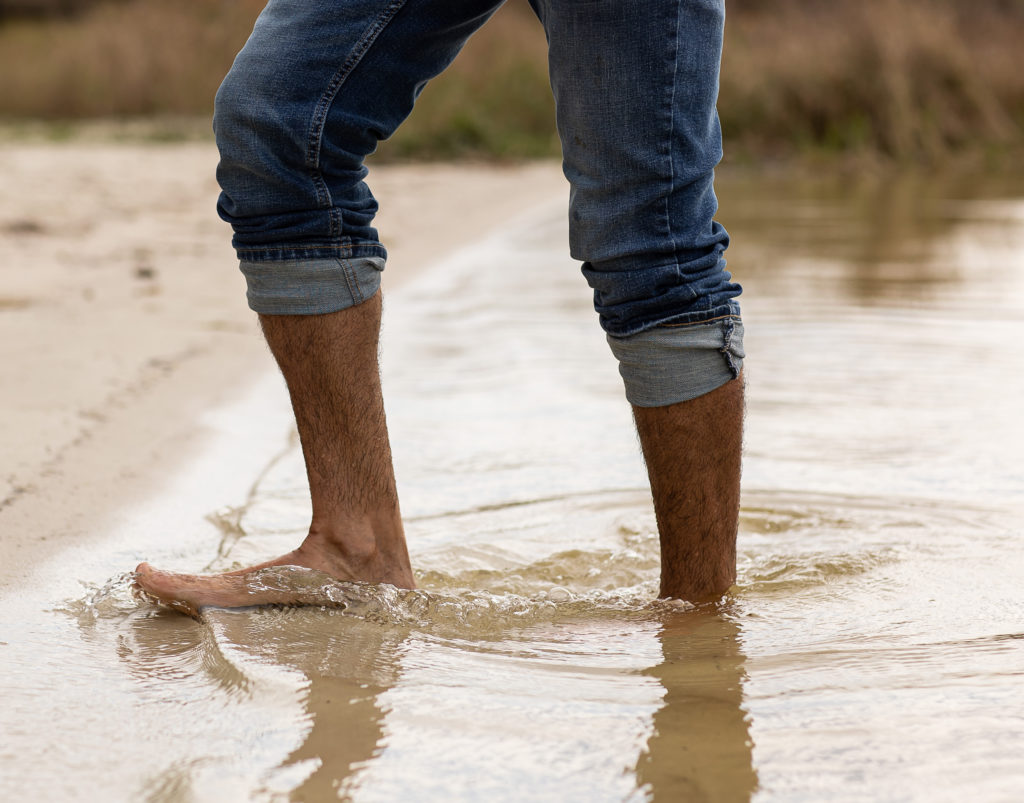 It was Wednesday, June 24, 1992. Perez, Torres and five other men had decided to depart at 6pm. They were counting on the northward summer wind to carry their small raft, with its homemade sail and rudder, to Florida. They knew a straight line from Havana to Key West was 90 miles but they had no idea how long it might take to get there. Their only navigational tool was a compass they had stolen from a container ship. They would concentrate on heading north and hope for the best. What they hadn’t counted on was the severity of the rainstorm that had begun the night before.

They were running on adrenaline that first night. The farther they paddled away from the harbor, the lower their chances of being spotted by Cuban officials and arrested. By the wee hours of the morning they were so tired they had to close their eyes and rest. They woke up in daylight with a view of the coast—the Cuban coast. The wind had shifted while they were asleep and they had drifted back nearly to their starting point. Once again they pointed the bow north and paddled as hard as they could, resolving to make sure someone stayed awake at all times to navigate.

It was still raining that first morning at sea. The wind picked up and was now carrying them in the right direction. Perez had designed their lightweight raft to float atop the waves, like a long, narrow kayak. The novice sailors were seasick riding 10- to 20-foot swells. They were soaked to the bone and shivering in the whipping wind. The stormy sky remained dark all day. At dinnertime on Thursday they had their first meal since leaving dry land 24 hours before. Not knowing how long their journey would take, they rationed their scant supply: eight ounces of water a day per person and four ounces of expired, canned hot dogs, tamales or sardines.

Buoyed by a little food in their bellies, they hunkered down for a second night at sea. The men took down the sail and wrapped it around themselves for warmth and protection against the driving rain.

“We couldn’t even sleep because the waves were really, really bad and the lightning was like daytime,” Perez remembers. “We’d hold the frame from the raft. Like that movie The Perfect Storm—I won’t watch it,” he adds.

The thunderstorm raged on through the second night and as dawn broke Friday morning, Perez remembers relaxing just a little. 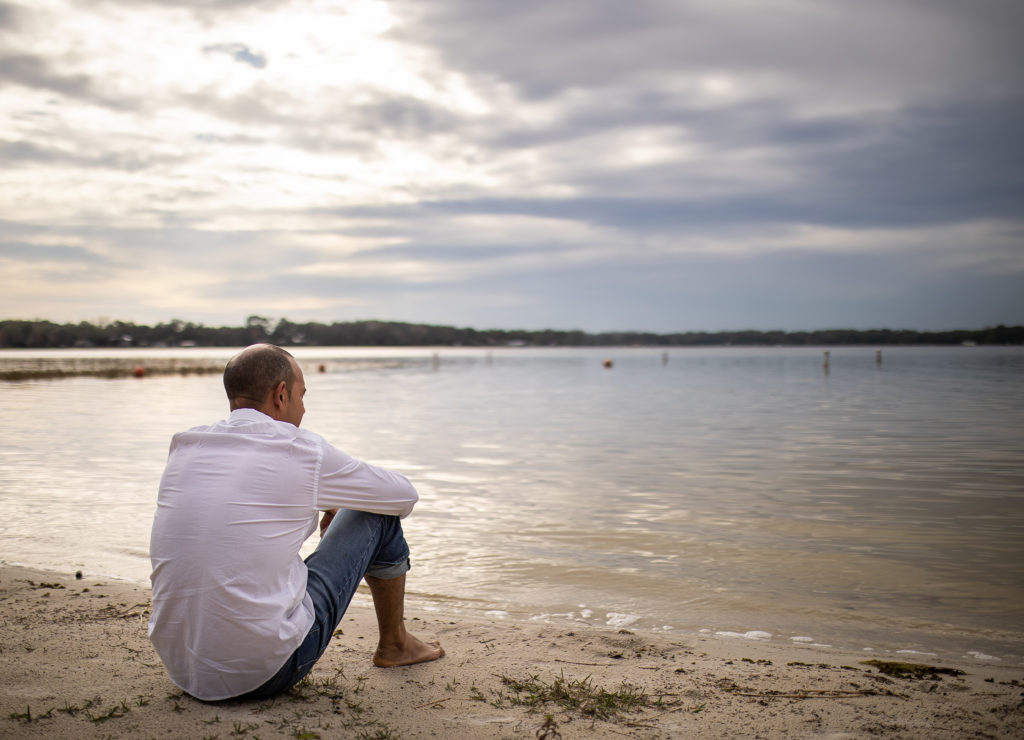 “I started to feel safe because I knew my raft was not going to break into pieces,” he recalls. “We passed through the hard part. We’re still here.”

They put the sail up and rode the strong wind northward all day, cold and uncomfortable.

On Friday evening, a pointy fin in the water, way too close for comfort, scared the guys into quickly pulling their arms and legs into the raft. The large shark passed by and, relieved, they ate their meager, cold dinner with the driving rain pelting their faces.

“That was the worst night,” Perez remembers. “The waves were really high, the wind so strong. I thought, ‘If we pass through this one, we’re going to be OK.’ We couldn’t sleep that night…it was rough.”

But as the storm raged on, they noticed a new phenomenon that lifted their spirits: the sky wasn’t quite as dark ahead of them as it was behind them. They were seeing the faint glow of lights from the Sunshine State on the horizon.

At dawn on Saturday morning, the rain finally stopped. The waves were calmer.

“Wow, look at that sunshine—it’s beautiful,” Perez remembers someone saying.

When they began to see butterflies and ducks they knew they were nearing land. They would reach Florida on their fourth day at sea.

“Everybody that morning was happy because we knew we were safe,” Perez recalls. “Nobody wanted to get breakfast; everybody was excited because we expected somebody to rescue us. So now we were emotional inside.”

Around midday, they spotted a few fishing boats in the distance and one headed towards them. It was piloted by a Spanish-speaking doctor from Miami who gave them food and cold drinks while he radioed the United States Coast Guard. 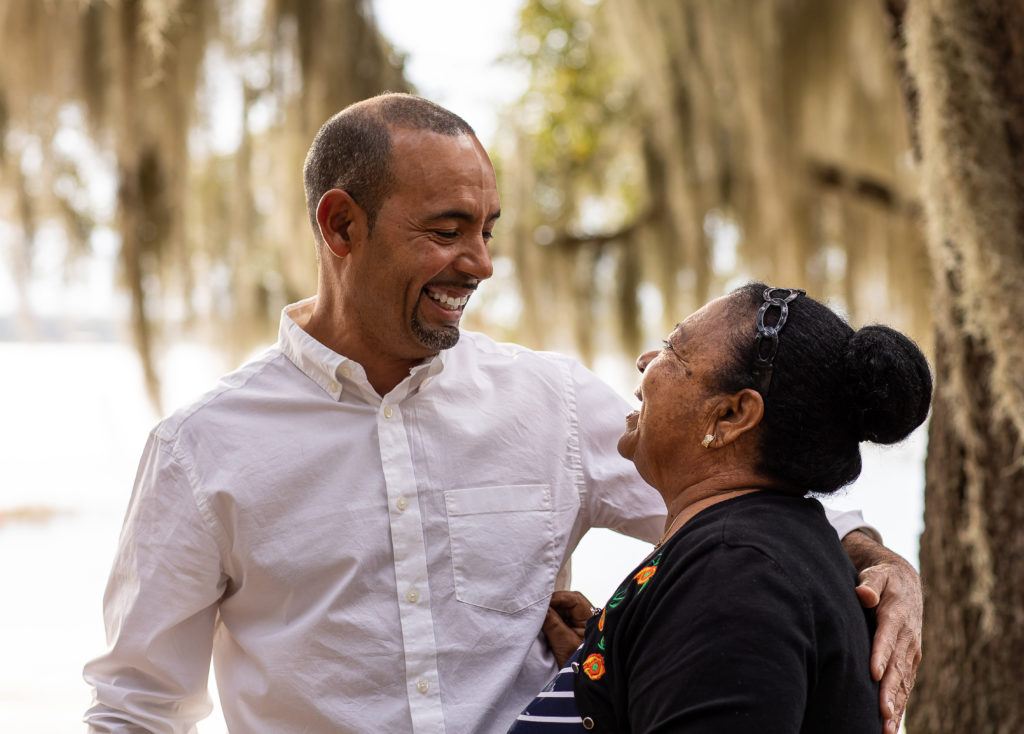 “We were so happy, so excited,” Perez shares. “I think it was the most emotional I was in all my life. That day you’re brought to life, you feel that way.”

I made it; I’m alive, he remembers thinking. We crossed the sea.

They would later learn that many other Cubans who attempted ocean crossings around the same time never reached their destination and were believed to have perished at sea. Just two months after they arrived, a group of 15 young people from their hometown—including friends and family members of Perez’s group—inspired by their success, built a raft that broke apart just off the Cuban coast. Seven of them were never found.

Perez’s mother and the families of the men he made the journey with found out they were safe from a radio broadcast on Radio Martí, a Miami Spanish-language station which, at that time, could be heard in Cuba and would announce the names of emigrants who successfully reached the United States.

As political refugees, Perez and his countrymen were granted U.S. residency after the Coast Guard delivered them to Miami. He and Torres, as well as one other young man from their raft, attended school to learn English. His first job in the U.S. was as a night custodian, and he soon picked up a second job during the day. After about a year, Perez earned his CDL license and began a career as a tractor trailer driver. He lived in multiple cities across Florida before settling in Ocala in 2008.

Every minute detail of the raft he designed and built is ingrained in Perez’s memory. He constructed a small but intricate model raft so he could explain to his children how he came to this country. He wants them to understand it’s not an easy decision for immigrants who choose to leave their homes to come to the United States. 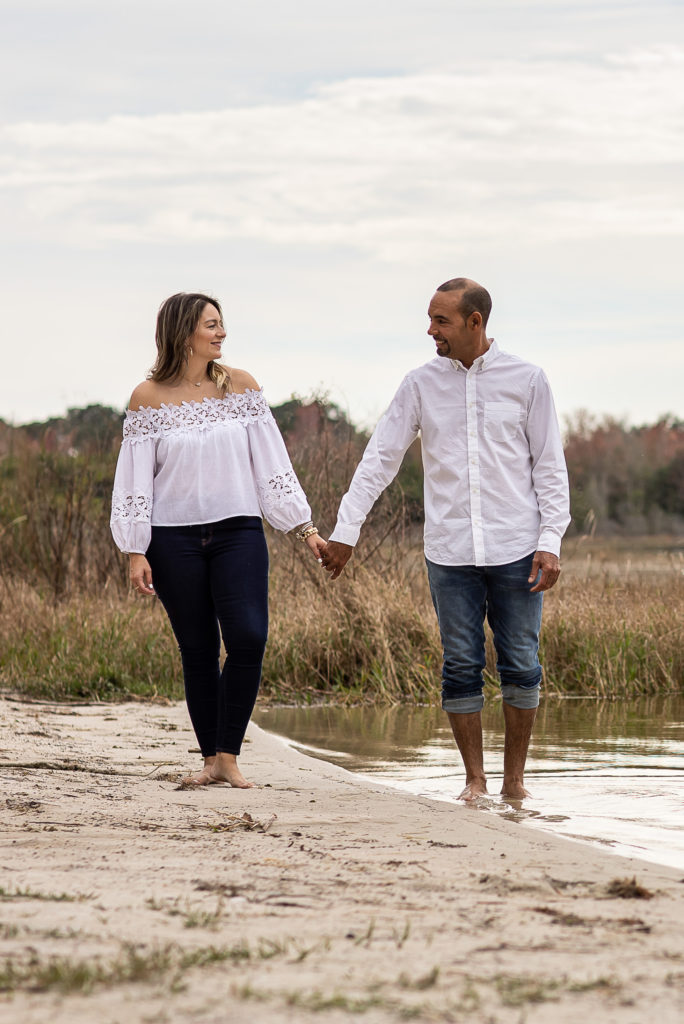 Currently, Perez is a cement truck driver for Argos. He comes home every night to the three-bedroom midcentury house he completely remodeled himself. His two older children, Anyuri and Christian, live in the Tampa area, where they are both finishing graduate school. His youngest, Rudy Jr., spends weekends with he and his wife Olivia. Their updated home on nearly an acre in a quiet Ocala neighborhood also has a comfortable guest room for Perez’s mother, Maribel Carballosa, who now travels from Cuba to visit every year or so. After the Cuban government opened travel restrictions in 2012, Perez was finally able to apply for her visa.

Over the past few years he’s learned the value of working a little less and making a little more time for family fun, thanks to Olivia.

“She’s the best,” he says, smiling at his new bride. “I believed there was something good for me in this country and it took time to find out. This is my dream and what I was waiting for.”