On one hand, there’s the Eco Jungle Adventure and on the other, the Tropical Women’s Wellness Retreat.

Whichever trip is chosen it is sure to be a life-changing experience. 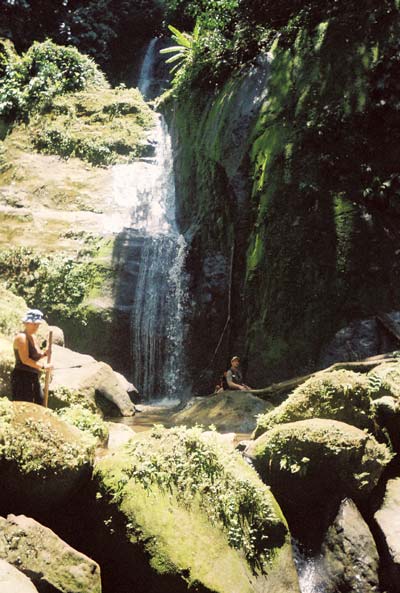 Dr. Kimberly Besuden, a chiropractor in Eustis and Winter Park, coordinates both trips. During each getaway, participants receive wellness through chiropractic adjustments, massage therapy, and yoga. The best part may be the tranquility of the area.

Kimberly says this is her second year leading the trips, which usually have anywhere from 10 to 15 participants.

“I take small groups of people,” she says, “so it is more personalized.”

The Eco Adventure, open to both men and women, offers white-water rafting and a hike that ends at a privately owned waterfall. Others may chose to ride horseback on the beach or take part in the rainforest canopy tour that includes eight aerial platforms and 1,200 meters of cables nestled in the jungle. A guide takes participants from one platform to another.

Kimberly, who developed a personal training and fitness company in Orlando in 1983, first came up with the idea of the Eco Adventure because patients wanted to have the opportunity to workout with her.

“I originally called it Boot Camp,” she says of the Eco Jungle Adventure. “I had to tone it down some because they [participants] wouldn’t be able to make it through the first day. I shifted the focus, but it’s still challenging. It’s supposed to be that way.”

Sasha Namundi, 68, of Mount Dora went on the week-long Eco Jungle Adventure earlier this year. During the retreat, she celebrated her birthday.

“It was my gift to me,” she says. “It was absolutely beautiful out there. It’s another world — a totally different culture. You have to leave your world behind, and when you walk into that world, it embraces you. There’s a clarity both in the air and the space.”

Sasha says that at her age, “I tend to look for firsts. I would not hesitate to go back.”

Brian Young, 42, was also part of the group that took advantage of the jungle and all it has to offer.

Of all the activities, the Mount Dora resident says the most enjoyable was the trek to the three-tiered waterfall. He says the trail was rugged and went through a crystal clear stream. A guide is needed to find the waterfall.

“The thing that was most noticeable to me were the biorhythms—being awakened by the monkeys of the jungle and the songs of the toucans.”

The view wasn’t half bad either.

“We overlooked the Caribbean from the top of the mountain,” he says.

The whole experience made Brian want to go back for more.

“For me, it was sort of a life-changing experience—the mind, body, and spirit wellness,” he says. “We’re right on the equator at the center of where everything is happening. The energy is fabulous. You’re in a jungle that is so full of life.”

Brian says when he returns in March, he plans on rappelling off the waterfall.

The Tropical Women’s Wellness Retreat is much more relaxed than the Eco-Jungle Adventure, but exercise is still a major component. There are several hikes, including one to a waterfall in the Bri-Bri Indigenous Reserve and another through the Cahuita National Park. The Cacao Trail canopy tour is also available.

Marie Len, 50, was part of the Tropical Women’s Wellness Retreat, a trip she says she needed to help celebrate her 50th birthday. She says she also needed a break from taking care of her son, who became paralyzed five years ago in an all-terrain vehicle accident.

“I needed some down time,” she says. “I invited two of my closest girlfriends to go with me.”

The women-only retreat gave them a break from their hectic lives and jobs.

“When we arrived, we became just people,” Marie says. “No makeup. Hair in a ponytail.”

A couple of days were spent on the beach. One of the hiking trips was along the shoreline and included the Cahuita National Park where they saw sloths, toucans, parrots, eyelash vipers, and monkeys. 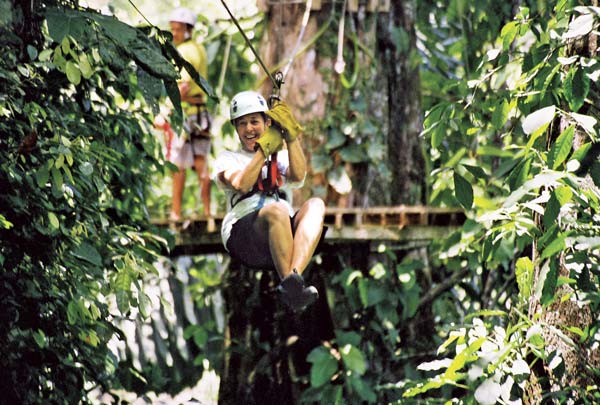 Participants in the Eco Jungle Adventure have the opportunity to
experience white-water rafting, hiking, zip-lines, and rapelling,
among other adventurous activities.

“They were right there,” Marie says of the latter. “You could reach out and touch them.”

Marie says she’ll never forget the retreat and what it has done for her.

“I came back a new person,” she recalls. “I really did. In more ways than one.”

The trips offer something for everyone, says Kimberly. And by the end of the excursions, everyone has changed.

“Both weeks are very transforming for everybody,” she says. “There’s kind of a spiritual energy. It’s very cleansing.”

A chiropractor since 1994, Kimberly has always been interested in wellness and exercise. She attended community college and Purdue University on a volleyball scholarship. She holds a bachelor’s degree in physical education and her graduate work was in exercise physiology.

A former middle and junior high school physical education teacher, Kimberly says becoming a chiropractor and leader of the wellness retreats were a natural progression.

“I always wanted to be a doctor when I was growing up,” she says. “I’ve always been amazed with the human body. Exercise and nutrition are important to complete wellness.”