While Dancing With the Stars and ballroom dancing in general have seen a surge in popularity in recent years, for a handful of local kids, it’s Ocala’s underground dance scene that’s really taking off. You’ve probably never heard of Nacho Cheese (no, not the chips) or the Ethics Crew… but maybe you should have. These kids can move. And they’re doing what they can to bring their body-bending, high-adrenaline form of dancing into the limelight.

Sunshine “Sunny” Vasquez began dancing five years ago at the age of 15.

“When I first started dancing I was so lost,” he says. “I watched the movie You Got Served over and over to learn some of the moves. Originally, I played football for seven years, so dance was quite a bit different.”

With no formal training under his belt, Sunny decided at 17 that it was time to get serious about dancing and learn the fundamentals.

“I traveled to New York, Atlanta, Washington D.C., all up and down the East Coast basically, dancing and learning from others.”

While many may know Sunny’s form of dance as breakdancing, b-boying is the original name and the one used by most who practice this early form of hip hop dancing.

Like Sunny, Detric Frizell, 19, wasn’t passionate about dance from an early age. That all changed when he moved from Chicago to Florida in 2008.

“That’s when I met Sunny and I really started to take it seriously,” he says. “Sunshine is a big influence of mine. I joined the drama club and saw him dancing a choreographed routine with a girl. It really caught my eye and impressed me. We kind of had an impromptu dance off and have been working together ever since.”

Detric, known mostly for his new-style hip hop moves, says he loves the freedom of movement that comes with dancing.

“With this style of dance, you do what you want when you want,” he says. “As long as it’s still hip hop, it’s cool.”

“In the beginning, Detric was a crumper,” Sunny says. “We were kind of rivals. Over time, we got close and decided to form our own crew.”

What started out as dancing in the front yard after school for fun has turned into a potential career-altering passion for everyone involved.

Before Sunny left for the Big Apple, he noticed Kalei Akaka dancing at a local studio. She would be the final puzzle piece to forming their perfect crew.

“We didn’t talk face to face, but I was impressed with what I saw,” he recalls. “Through friends and Facebook, we reconnected six months later.

A competitive dancer since age 7, Kalei Akaka, now 19, is definitely making a name for herself in the world of dance.

“My favorite style of dance is contemporary,” she says. “If I’m having a bad day, I can express how I’m feeling through dance. It’s my outlet.”

Growing up with very supportive parents, Kalei was able to excel at her sport.

“My dad has three jobs, and my mom has two,” she says. “I have two younger sisters who also dance. Our parents do whatever they can to keep us doing what we love.”

As a competitive dancer, Kalei admits that the hardest part of her job on stage is making it look effortless. Through injuries and a common heart condition known as vasovagal syncope, Kalei keeps dancing. Kalei’s determination and strength are just two of the trait’s that caused Sunny to take notice.

Kalei was equally impressed with Sunny.

“I saw him teaching at a studio, and we eventually became friends,” says Kalei. “That’s how I got hooked up with Nacho Cheese. I’m learning their styles of dance, and they’re learning mine. We work well together and complement one another.” 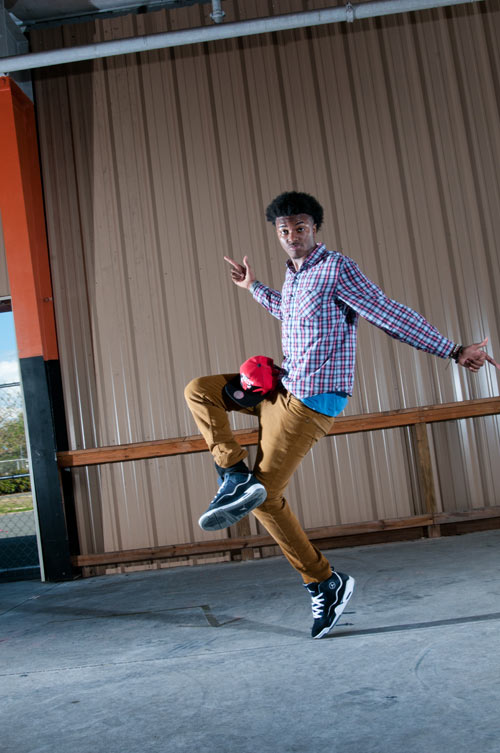 “We’re a crew of weird personalities,” adds Detric. “We’re all different, with different backgrounds and ideas. But we share a common passion.”

So just where did the name Nacho Cheese come from?

“Nachos give you lots of flavor,” says Detric. “A nacho chip by itself is kind of dull and plain, but when you add the cheese to it, it’s a whole new story.”

With a name in place, the trio continued perfecting their craft. For Sunny, coming up with dance moves is as easy as turning his attention to nature.

“I love to watch how animals move,” he says. “You watch a tiger take off on two feet and land on four. So I take inspiration from things like that. Water, too. I can be liquid and fluid in my movements like flowing water.”

According to Sunny, the hardest thing to teach an up-and-coming dancer is creativity.

“Anyone could do a headspin with enough practice,” he says. “The hard part is getting in and out of the headspin. The transitions. I can teach the moves, but I also try to teach people to think outside the box and come up with their own creative movements to stand out from the rest.”

Today, both Sunny and Kalei teach classes at Extension Dance Studio in Ocala. The trio practices regularly at the YMCA and is often asked to perform for events and talent shows.

For the members of Nacho Cheese, dancing is about letting others see into your soul. Perhaps Detric sums it up best.

“I know it sounds cliché, but dancing really is a window into a person’s personality,” he says. “You can’t lie when you dance, and dancing gives people a lot of desirable traits, like self determination, compassion, passion and motivation. These are virtues you can take with you and apply to the rest of your life.”

Detric adds that for years his mom told him “You never know what’s good for you until you try it.” The same can be true of trying to dance for the first time.

“Our main goal is to encourage dancing in Ocala,” says Kalei.

“We just put all our styles out there and dance to the point of people saying ‘Hey, have you seen these kids dance in Ocala?’

A member of CF’s dance team, Kalei will soon be headed to Atlanta where she will officially sign with the Bloc Agency, a talent agency representing choreographers, dancers, extreme athletes and models in Los Angeles, New York City and Atlanta.

“One of Beyonce’s backup dancers came to a DMA (Dance Masters of America) competition here, and the CF dance team helped work the event,” says Kalei. “Beyonce’s back up dancer taught us a routine. Three of the girls were chosen to work more with the agency.”

Dancing is as much a part of Kalei’s everyday life as eating and sleeping.

A CF student studying business, Kalei hopes to one day open her own dance studio.

“Dancing is my life,” she says. “I always tell people, ‘If you want to be a dancer, you can. Anyone can dance.’” 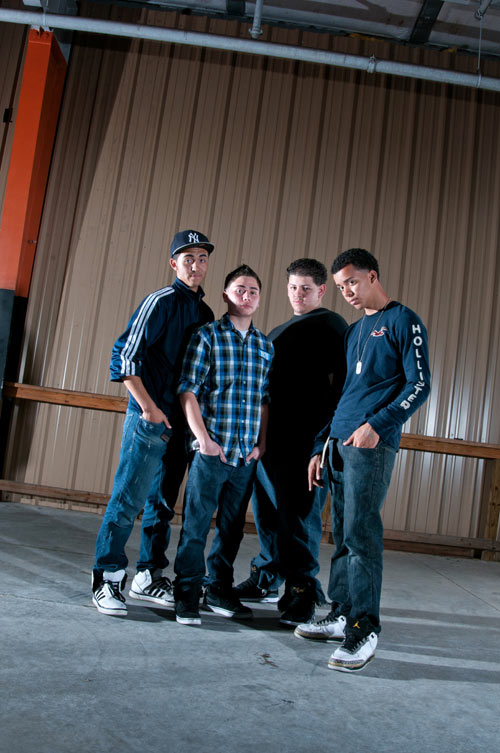 Taking inspiration from their friends in Nacho Cheese, four friends from Marion Technical Institute joined together to form The Ethics Crew.

“I went with Gino to a dance class, and he encouraged me to try it as well,” says member Justin Alpreche, 17. “I was very skeptical at first, but when I started dancing, I realized it was a lot of fun, so I kept up with it.”

Dancing together as a crew for just two months, the guys in The Ethics Crew have already performed in talent shows and at the YMCA, where they also practice several times a week.

As the “new kids on the block” of Ocala’s dance scene, Justin, Dino, Jay and Daniel all agree that practice makes perfect and they’re still learning and taking it all in.

“We really have to give it our all,” says Justin. “Don’t think about any criticism you may encounter along the way. Think about inspiring others. The way I see it, if I can dance, so can you.”

So They Think They Can Dance

For months Detric told his friend Sunny, “We’re going to try out for So You Think You Can Dance when auditions begin. And for months Sunny placated his eager friend.

“Sunny was against it in the beginning,” Detric says. “Even I was at first. It was my mom that originally put the idea into my head, and I was stubborn and thought ‘I’m not a ballroom or contemporary dancer.’”

Luckily, though, the seed was planted, and the idea of auditioning for SYTYCD was beginning to grow.

Ultimately, the hope of raising awareness about their crew and the dancing talent here in Ocala won out, and the duo was eventually on a bus bound for Atlanta, where the nearest tryouts were held this past spring.

“When I got there, I wasn’t thinking competition. I just wanted to have a good time and do a good job. I was motivating myself and saying ‘I’m not going all this way for nothing,’” says Sunny. Among the first in line, Sunny and Detric spent the night outdoors in freezing temperatures. They passed the time and stayed warm alternating between resting and practicing dance moves.

“We had already made it up in our minds that nobody was going to stand in our way,” Detric laughs. “We were going to make it to Vegas.”

So without nerves, the friends carried themselves like professional dancers, forcing others to see them as the competition.

“We feed off one another,” says Detric. “If he’s confident, so am I. It worked out well for us with it being such a huge opportunity.”

“Luckily we were among the first to get called in,” adds Sunny. “They called 10 in at a time, and we had to dance in front of the producers and two all-stars from past seasons. Even though there’s a line of us, it was very much you against the world.”

Sunny remembers that Dietric danced first. “I was after him,” he says. “I just danced and did the best I could. I tried to be explosive.”

And he obviously did enough to get noticed.

“Fox5 Atlanta covered the auditions and pulled me out of line after seeing me practice,” recalls Sunny. “It was pretty cool being on the news segment about the show.”

Sunny adds that dancing on SYTYCD is as much about showing off your personality as it is about dancing.

“If you have a straight face with no passion, you won’t get noticed,” he says. “When you have fun with it and truly love what you do, you get good results.”

And that’s all we can say about the subject! You’ll have to tune in to season nine of So You Think You Can Dance on May 24 to find out how far Detric and Sunny go.