Transferring to a new high school can be difficult for most teenagers, but senior Angelia Marrero found a welcoming atmosphere at Wildwood High School and a new place to demonstrate her athletic skills—on the football field.

When the Wildwood Wildcats varsity football team meets arch rivals South Sumter High on August 27, they’ll have a secret weapon in the form of a five-foot-two-inch bundle of determination named Angelia Marrero.

Her beauty and engaging smile belie the strength of this 17-year-old dynamo, who says she’s played soccer since she could walk. In fact, she was a star soccer player at Ocala’s Vanguard High School before she transferred to Wildwood High School at the beginning of her junior year in 2008. 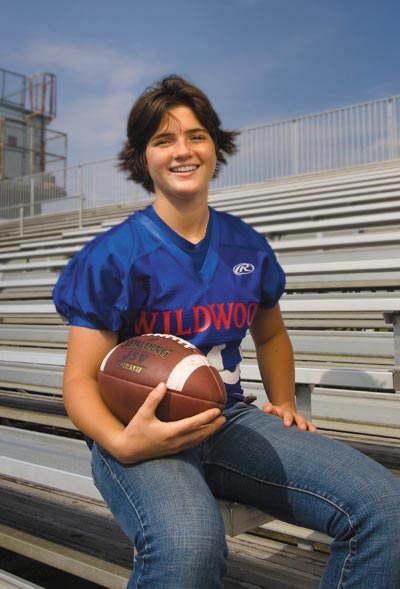 She smiles as she describes her new high school, calling it welcoming, warm, and family-friendly.

“Proving myself wasn’t hard,” Angelia says. “The biggest challenges were coming from a significantly larger school to a smaller one and leaving behind my soccer and softball teammates there.”

Angelia joined the Wildwood girls’ softball team and took weightlifting classes. She certainly didn’t set out to make history as Wildwood High’s first female football player. In fact, she had planned to be just the team manager. She and some of the varsity players were taking a break during a weightlifting class last spring when they decided to kick a few footballs just for fun.

That’s when Wildwood Coach Matt Thompson recognized that she could be a contender for the vacant placekicker’s position. His former kicker had transferred to another school.

“He told me that I might just have a place on the team,” Angelia recalls. “So I went home to get my cleats, came back, and tried out.”

Her admiration for Coach Thompson runs strong because she says “not many coaches would be open to having a female football player.”

Angelia is also appreciative of her teammates, who have welcomed and accepted her since day one. She’s quick to point out that teamwork is necessary in order for a kicker to be successful.

“The kicker is totally dependent on the snap and the hold,” she explains, “not to mention the players who protect the kicker from getting hit.”

Angelia grew up playing football with her brothers so she understands that some plays may hurt more than others, but she’s not afraid to get hit. Shake it off and get back up is her motto, not just in football but also in her efforts to become a mixed martial artist.

“One of Angelia’s most notable qualities is her enthusiasm,” says Wildwood Athletic Director Von Moreland. “When you watch her, you get a real sense of a student-athlete who is excited to be out there on the playing field. She’s having fun.”

Moreland and her coaches know that having a female football player will not be without challenges that they will have to handle as the season unfolds.

“Having a girl on the team will no doubt present its share of situations,” Moreland says. “However, from what I’ve observed of Angelia, she knows not only how to adapt to a situation but also has a knack for making the best out of it.”

While football is bringing some attention her way this year, Angelia knows that this is just a one-season stint. And that’s okay because she has set her sights on getting accepted into the U.S. Naval Academy. She recently returned from a two-week summer program at the Academy, where she hopes to major in chemistry next year. Her ultimate goal is to go to medical school and become a cardiovascular heart surgeon.

In the meantime, Angelia’s a dual-enrollment honor student at Wildwood High, combining her remaining high school classes with college courses at Lake-Sumter Community College. She’s already completed two semesters at LSCC, including courses in college algebra and humanities this past summer while juggling her two-a-day football workouts. 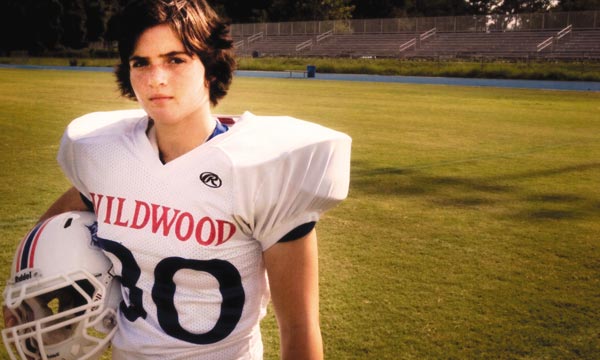 Those workouts included accuracy drills for two straight hours, which showed would-be skeptics that she could easily nail 35-yard field goals with spot-on accuracy. Angelia plans to see plenty of action on the field this season.

“Anytime we score, which will be a lot,” she says confidently, “I’ll be either kicking field goals or extra points.”

Angelia had the support of her brothers and her stepfather, Jay Lindsey, who is a former lineman for the Wildwood Wildcats and now a corporal with the Wildwood Police Department. However, her mother, Monica Lindsey, wasn’t exactly overjoyed when Angelia broke the news that she was going to play football.

“My mom always taught me that I should try to achieve whatever I wanted and not let anything stand in my way,” she says. “I sort of used that argument on her, and she eventually came around.”

Although she loves sports, Angelia’s eyes light up when she talks about her latest hobby, photography,.

“I’m always out taking pictures, especially around The Villages,” she says. “My favorite subjects are sunsets and landscapes.”

And what advice does Angelia have for other young women who follow her footsteps into traditional male-dominated areas like sports or military academies?

“Go for it,” she says with a determined smile. “Don’t let anyone tell you that you can’t do it.”