Okay, I admit it. I’ve always been someone who wanted to know, as radio personality Paul Harvey is so fond of saying, the “rest of the story.”

Over the years, I’ve often read the classified ads, not hunting for anything in particular, but simply intrigued by the fact that all those lines of newsprint (and more recently online ads) represented countless lives. I thought of them as hundreds of “mini stories”—or at least the beginnings of stories—just waiting for resolution. At times, I’ve thought you could build the plot of an entire novel around one especially unusual ad.

So when I received an assignment to uncover the stories behind a handful of classified ads, it was a great excuse to start perusing the columns of ad listings on www.ocala4sale.com.

Just like everyday life, the stories behind the ads revealed joy and heartache, irony and serendipity, and hopes and dreams. At press time, the stories behind some of the ads were history, but that wasn’t the case with every single ad. Some loose ends are still waiting to be tied up, and somewhere, perhaps, there is a reader with the answer. After all, life works that way sometimes. 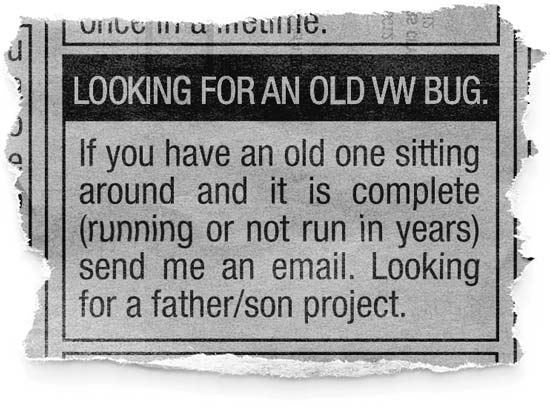 When Bob Leibold and his son Jordan, 8, were scouring the Internet looking for dune buggies, Bob thought they might have more fun—and more of a challenge—in making their own. Realizing that an old Volkswagen Beetle would be the perfect starting point, Bob posted an ad in hopes of locating one. 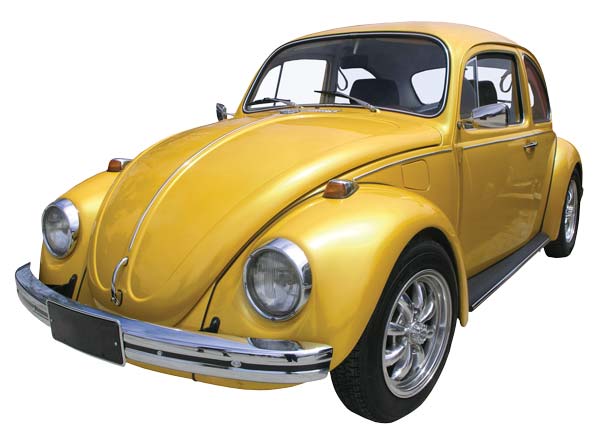 “It’s a hard item to find, not one everyone’s going to have sitting around,” Bob admits. “We’re going to strip it down, take the old body off, and put a new fiberglass body on. It will be a big project.”

Although the father-son team has been searching for a few months, Bob says they can always find something to rebuild. The duo has already brought one old car back to life, a 1971 Triumph Spitfire.

“We had to travel to Georgia,” recalls Bob. “It was more dead than alive, and it took us about a year to re-do. Jordan did a lot of the sanding.”

“He’s a great student, brighter than his dad for sure,” adds Bob. “He has every computer game in the world, but I like him outside, spending time with me. Some of our projects are pretty neat.”

Bob has pondered the option of looking for a partially completed dune buggy or one that’s finished, but would prefer the satisfaction of building the project with Jordan. He’s hopeful an old VW Bug is out there somewhere just waiting to morph into a dune buggy.

“Dune buggies are a pretty neat little toy,” Bob says. “And they’re good on gasoline, too.”

Sometimes a job brings much more into your life than just a paycheck. For Rita Ryan of Weirsdale, that’s been the story with her business for the past 20 years.

Years ago, Rita took a job driving an ice cream truck and fell in love—with the job. So when she had the opportunity to buy a business of her own, she knew exactly what she wanted to do. Since then, she and her husband, Harry, have run Rita’s Ice Cream together.

Over time they expanded the business to include three ice cream trucks—complete with the classic music boxes that alert potential customers—along with nine storage freezers.

During the school year, she works afternoons and both weekend days. During the summer, the ice cream trucks often run seven days a week. Yes, a drive-thru on wheels is admittedly an unusual way to make a living, but for Rita it’s been a dream come true.

“I love kids and I didn’t have any of my own,” she says. “Children bring so much happiness into your life. They show you pictures and tell you when there’s something big in their lives. We have customers who bring their children to the truck now and those parents were our customers when they were kids.”

For Rita, driving an ice cream truck for the past two decades has always been a surefire way to brighten her day.

“Even if I’m bummed when I leave,” she recounts, “I’m happy when I get home.”

After she was diagnosed with ovarian cancer in May, Rita, 53, realized things were going to change. The odds doctors have given her are sobering.

When Rita made the tough decision to sell the business that has given her so much enjoyment over the years, she wasn’t looking to score big. She’s asking a very reasonable price and is hoping someone else will carry on the tradition and find satisfaction in the job she’s loved for so long.

Instead of asking for money for the routes, she simply put price tags on the trucks and equipment. Her nephew has been driving one of the trucks and would be happy to continue working for whoever buys the business.

“You’ll turn down a street and see 25 kids jumping up and down, so anxious for you to come,” Rita notes. “In all my years of working, I’ve never found a job that was so much fun.” 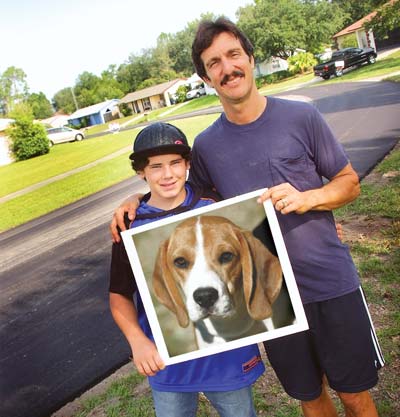 It was almost déjà vu. Rick Bye was riding his bike through his Marion Oaks neighborhood when he noticed a Beagle puppy playing in a neighbor’s front yard.

“She looked just like Holly, a Beagle puppy I’d gotten for my wife, Patty, for Christmas,” Rick says of the much-loved pet who was part of their family for 12 years.

When he stopped his bike to pet the puppy, the neighbors told him the dog wasn’t theirs and had just showed up. When Rick pedaled away, the little Beagle followed him all the way home, obviously lost.

Patty took a photo of the dog, which appeared to be less than six months old, and created a flier that she posted in the neighborhood. She also ran a “found puppy” ad in the paper and on ocala4sale.com. Meanwhile, the Byes kept the dog at their home, much to the dismay of their other two dogs who were a bit jealous of the pup.

That same week, a woman spotted one of the fliers Patty had left at a Kwik King store in Marion Oaks. As soon as she saw the photo, she knew it was Roxy, her teenage son’s young dog. She called the Byes immediately.

They only lived a few streets apart.

“We didn’t want her to go to the pound, so I was really happy,” Rick says. “She found her way back home.” 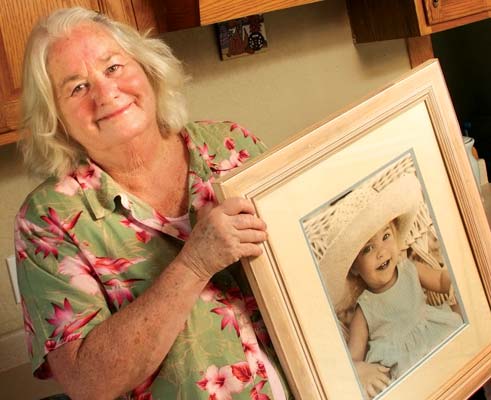 Crystal Daniels, who has worked as a professional photographer, has had
great success through ads placed online.

Crystal Daniels is a believer in advertising on the Internet. After all, that’s how she found her current home in Summerfield, an online discovery that prompted a cross-country move last year.

A horse lover and owner, Crystal was drawn to Ocala because of its large equine community. The lack of severe winter weather was also appealing to someone who’d been living in the Northwest.

“I’ve met some interesting people through ads when I moved here from Oregon,” notes Crystal. “I ran one ad looking for someone to go to Disney World and met a friend that way.”

Having been a professional nanny, photographer, chef, and horsewoman at various times in her life, Crystal decided she should put those skills to use and ran an ad looking for part-time work.

“I really enjoy cooking and I love healthy, organic foods,” she says. “I’ve worked at spas, restaurants, and for many private people, but I don’t want a restaurant job now.”

Ideally, she is hoping to make someone’s life easier by cooking dinner a couple nights a week. She also likes being behind a camera and is available for wedding photography.

“I’m not looking for full-time work,” says Crystal, “but I feel I need to give out of my talents.” 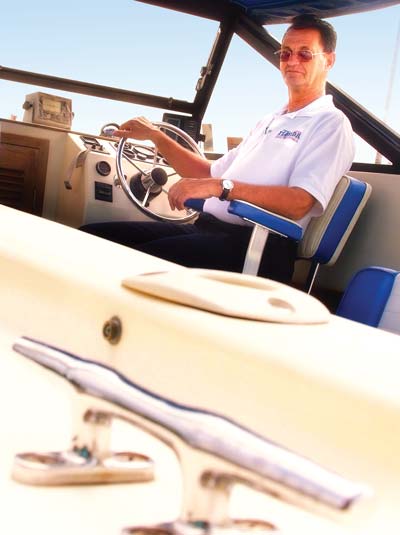 Trading a cabin boat for an RV sounds like a great swap to Bill Yates.

Bill Yates believes in planning ahead. When he retires next July from his job as compliance examiner at the Department of Motor Vehicles at the McPherson Complex in Ocala, he intends to head to Tennessee. The Weirsdale resident devised the idea of trading his boat for an RV or a concession stand, so he posted an ad.

“I thought this would be something I could do for part-time money at places like country fairs, arts and crafts fairs, baseball games where they have vendors,” says Bill, who intends to stay busy during retirement.

After running the ad for a month, Bill still had his boat, so he hauled it to a boat consignment dealer.

“I got responses from the ad, but the people who were interested said it was too big for them to handle by themselves,” he says. “It’s not a cabin cruiser, so it doesn’t have a kitchen.”

Bill says he’ll probably run another ad. Somewhere out there is the perfect next owner for his 24-foot boat, ideally someone with an RV or concession trailer they’d like to trade.

“I’m optimistic it will happen one of these days!” he says.

When Tania Perry’s daughter, Jennifer, announced her engagement last year, Tania did what most mothers do—she started shopping for wedding supplies. She purchased everything from a cake topper to champagne toasting glasses over the course of several months. The wedding was set for January 28, 2008, and Tania was determined to be ready.

“We’d put down a deposit on a wedding dress when the owner closed the shop and left town,” says Tania, who lives in Ocala. “They even did a story on the woman who owned the shop on NewsCenter 2 [WESH-TV]. We never got the dress or our money back.”

Then in October 2007, Jennifer and her fiancé broke off the engagement.

Looking for a silver lining, she decided someone else might be able to benefit from her early shopping efforts. She posted online ads for the wedding supplies and didn’t have to wait long for a buyer.

“I only had the ad out about three days before I sold it all to a woman in Ocala who’s getting married this December,” says Tania. “She’s on a budget because she has four kids and things are pretty tight. She was excited because it’s all brand-new stuff.”